Anybody Dare To Call The Cops On These Cops?

Officers Jeer at Arraignment of 16 Colleagues in Ticket-Fixing Investigation


A three-year investigation into the police’s habit of fixing traffic and parking tickets in the Bronx ended in the unsealing of indictments on Friday and a stunning display of vitriol by hundreds of off-duty officers, who converged on the courthouse to applaud their accused colleagues and denounce their prosecution.

I am sure if anyone else tried to pull off that jazz, they would be in jail immediately. 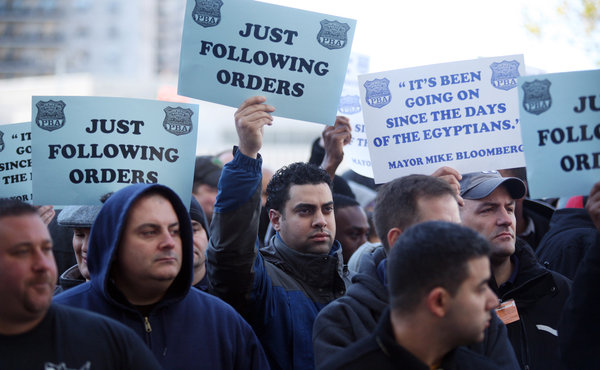 The first time I saw this story in the news, I was pretty glad that these people were caught for ticket fixing. But as they say, a picture is worth a thousand words. It is sad that cops have to meet some kind of quota to stay on the force. Especially when they get paid garbage. So there is not much you can turn to. You would think that giving out less tickets would be a good thing as it displays public order. But cops inflate it by fixing tickets because they have to meet some kind of quota. It was said as many as 350 officers outside the courtroom in support for their fellow officers.
edit on 29-10-2011 by fordrew because: (no reason given)

"Just Following Orders" - that's how many Nazi's justified their actions. If an order is wrong, disobey it. Get your fellow officers to disobey it too. They can't fire the entire PD if ALL the cops refuse to follow immoral or illegal orders.

posted on Oct, 30 2011 @ 12:14 AM
link
It's been going on since the Egyptian days, huh? REALLY? And I suppose the Egyptians were driving around on what.....flying carpets.....when they got their tickets and had them "fixed." The mentality of these cops trying to protect the wrongdoers is outrageous and trying to blame unethical behavior on the fact they were "just following orders" or doing things this way because it's been going on for a long time is a chickensh*t thing to do. I can't believe the audacity.

I have an idea, why doesn't the public request the department look into the daily work activities of the cops who are defending this practice in this photo and see what other unethical practices these a-----es have been getting away with that they have found some convenient excuse to justify.

Does anyone take responsibility for their own decisions and actions anymore?

And yes, if it were you or me grabbing cameras from reporters, we would be charged with assault but the cops these days are above the law it seems.

When it comes to the end, they will be in the streets like the rest of us and then what will they say to you? More importantly, what will YOU say to them?

Just like a soldier in war "I was ordered to kill and therefore it's not my fault". Does anyone take responsibility for their own decisions and actions anymore?

The answer to your question is NO....NO they don't. And the fact that they use a stupid quote like "It's been going on since the days of the Egyptians" is very telling about the ignorance of these cops and what little regard they have about how they are viewed by the people who pay their salaries. Shoot, guys, why the hell don't you start capping rounds off at fleeing felons and sh*t like that, too! Why not? That's how they used to do it in the old days! Keep up the tradition, who cares if you shoot someone in the back, they got away with it in the old days, man!

Yes, a little extreme, but it's the same damn principle. These cops should be suspended for this crap.

posted on Oct, 30 2011 @ 12:24 AM
link
Michael Bloomberg sure is showing his authoritarian colors lately and a total disregard for the citizens he is paid to serve. I guess being made emporor of NY will make you feel a bit entitled.

posted on Oct, 30 2011 @ 12:37 AM
link
every cop there should be charged with conspiracy to commit a felony- tampering with evidence.
Badges stripped , jail time for offenders, and fines/probation for every cop there admitting they have done this.

walking, flatulating disgraces. every one of them.

Link every cop on ATS that swears up and down that crooked cops are the exception, to this thread..
Not in the largest police force on earth.

posted on Oct, 30 2011 @ 12:44 AM
link
I read the article and my first impressions - purely from the information provided is that someone needs to look like they are doing their job. That person appears to be the District Attorney who, despite the authority of office would still answer to a higher authority.

Appears that the illegal behaviour of the police has been going on for some time - as evidenced by multiple charges with high amounts of bail, as well as the sign that includes a reference to policing in ancient civilisations.

As a former officer ( in Australia) I have an understanding of the US police system as the Aussie system has over time been adopted from the US administrative system (its really just the ranking system that is different). It is an educated guess, without being privvy to actual evidence, that the officers who have been charged are being made into public examples.

It appears to be an exercise in public relations - the cabal/illuminati/whatever showing the public that police are not immune to being prosecuted by the very laws they are supposed to uphold. This public relations exercise will see the focus taken off the cabal/illuminati/whatever so that the general (unawakened) public think that the government authorities are actually doing their job.

What really needs to happen is the government needs to open their books to a legislative audit to evince all that happens to taxpayers monies. Let take for example - DUMBS and space exploration technology and why bankers bailed out the mortgage companies and left the wage earning people of America without their homes. The ethics, actions and bank accounts of those in the highest of public office are the people who should be on trial. I think this is why there is a public show of support from the off duty officers - could be an indication that the real story has yet to be revealed. The off duty officers would probably make excellent witnesses on the stand but I bet you none of them will be called because the law is not structured to admit all evidence - just the relevant and admissable evidence.

I will watch this situation unfold with great interest.


The mentality of these cops trying to protect the wrongdoers is outrageous and trying to blame unethical behavior on the fact they were "just following orders" or doing things this way because it's been going on for a long time is a chickensh*t thing to do. I can't believe the audacity.

"Just Following Orders" - that's how many Nazi's justified their actions. If an order is wrong, disobey it. Get your fellow officers to disobey it too. They can't fire the entire PD if ALL the cops refuse to follow immoral or illegal orders.

To answer your just following orders. If the entire PD protests, and gets fired, thats ok. Because there are that many police officers looking for a job that will take their place and happily follow orders. These officers want their jobs and want the corruption to stop. The can't be sheep if they know whats going on.
edit on 30-10-2011 by fordrew because: (no reason given)