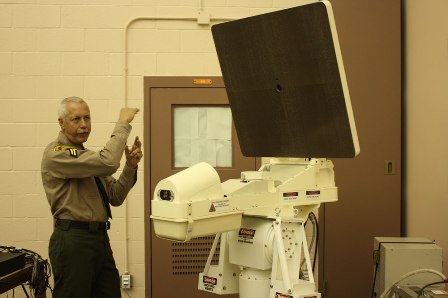 What is it?
It is a weapon that causes pain by using microwaves to heat the skin to a temperature of about 130 degrees. Yup, the same technology you use in your kitchen.

Cost to Tax Payers
The US military spent more than $40 million developing the technology and introduced it in 2001.

the ADS provides the technical possibility to produce burns of second and third degree. Because the beam of diameter 2 m and above is wider than human size, such burns would occur over considerable parts of the body, up to 50% of its surface...Without a technical device that reliably prevents re-triggering on the same target subject, the ADS has a potential to produce permanent injury or death

How lethal can it be?
It can cause permanent hearing loss since generated noise levels can reach 150Db. Noise levels above 90Db are harmful.


These grenades are designed to temporarily neutralize the combat effectiveness of enemies by disorienting their senses. The flash of light momentarily activates all light sensitive cells in the eye, making vision impossible for approximately five seconds until the eye restores itself to its normal, unstimulated state. The extremely loud blast produced by the grenade adds to its incapacitating properties by disturbing the fluid in the ear.

Charlotte, North Carolina, SWAT officer Fred Thornton was killed last month when a flashbang grenade exploded as he was securing his equipment in the trunk of his patrol car. This comes a few years after the federal government began a criminal investigation of a firm that manufactured faulty flashbangs, one of which prematurely detonated in 2008, causing permanent injury to three FBI agents.


Tear gas, formally known as a lachrymatory agent or lachrymator (from lacrima meaning "a tear" in Latin), is a non-lethal chemical weapon that stimulates the corneal nerves in the eyes to cause tearing, pain, and even blindness

Weapon Deployment
Usually in a canister or grenade. Can be launched too.

Who makes it for USA Police Force?
Main supplier (other suppliers exist as well) is


Defense Technology, a Casper, Wyoming-based arms firm that...supplies the Israeli army with teargas rounds and other weapons of mass suppression. BAE [Blackwater] is the parent company of Defense Tech...BAE’s services to U.S. intelligence including the CIA and the National Counter-Terrorism Center are provided through a special unit called the Global Analysis Business Unit. It is located in McLean, Virginia, a stone’s throw from the CIA

Jawaher Abu Rahme, a 36-year-old resident of Bilin, died this year of asphyxiation from Israeli tear gas rounds. Her brother, Bassem, was killed two years earlier when he was struck in the chest by a high velocity teargas shell


This non-lethal weapon is based on the well established microwave auditory effect (MAE). MAE results in a strong sound sensation in the human head when it is irradiated with specifically selected microwave pulses of low energy. Through the combination of pulse parameters and pulse power, it is possible to raise the auditory sensation to the “discomfort” level, deterring personnel from entering a protected perimeter or, if necessary, temporarily incapacitating particular individuals

How does it Work ( Very Important!)


MEDUSA system makes use of the well-established Microwave Auditory Effect, in which microwave stimulation causes parts of the ear around the cochlea to expand thermally, which is interpreted as sound by the brain. The effect is a sound that appears to originate in the target's head, and can't be heard by anyone not directly in the beam's path.

Because MEDUSA's sound doesn't vibrate the eardrum itself, and thus the eardrum is not exposed to the damage potential that loud acoustic noise produces, traditional noise level limits don't have to apply with the MEDUSA system. So it's possible to dial in any level of sonic deterrent from mildly annoying up to physically and mentally incapacitating levels that the target has no way of blocking out of their head.

The Sierra Nevada Corporation claimed this week that it is ready to begin production on the MEDUSA, a damned scary ray gun that uses the "microwave audio effect" to implant sounds and perhaps even specific messages inside people's heads... or suggestive subconscious comments that you don't really "hear" but can influence decision-making anyway

**This is indeed a very dangerous weapon since it can specifically target someone and implant thoughts and ideas in people. Birds are known to be particularly sensitive to microwaves that this technology employs. Care to wager that MEDUSA might be reponsible for mass animals deaths and unexpected bird behavior? well since this is ATS, might as well. Could MEDUSA be reponsible for the OWs and the global uprisings?