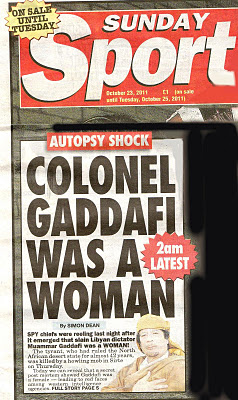 FROM THE FRONT PAGE ARTICLE:

SPY chiefs were reeling last night after it emerged that slain Libyan dictator Mummar Gaddafi was a WOMAN! They tyrant, who had ruled the North African dessert state for almost 42 years was killed by a howling mob in Sirte on Thursday. I CANT READ THE LAST PARAGRAPH…

THIS IS NOT A JOKE!
So could this be the start of a new conspiracy for ATS? Well no, because Sunday Sport quickly removed any online content about the article. I’m wondering if any UK locals have a copy?
Obviously not a reputable news source, but they sure no how to get rid of almost all evidence of this stuff up. Somehow i get the feeling for something like this to happen they have to be doing a lot of brainstorming in msm news rooms. Clearly they are just pulling crap out of their behinds and claiming it as news. How long till the gaddafi bashing ends?

I think we really need to spread this because it is big proof of the conspiracy to demonize Mr. Gaddafi.
edit on 27-10-2011 by ShortMemory because: (no reason given)


Its the sunday sport.... other headlines have incuded double decker bus found on moon and something to do with a mother claiming her son is an alien and being a fish finger or something. No conspiracy whatsover im afraid, its a spoof paper with spoof headlines and just full of pics of ladies with no kit on

Its a comic and NOT mainstream media trying to unravel a huge cover up, but im sure some on here will read that and believe it!!!

posted on Oct, 27 2011 @ 07:08 AM
link
I remember readin an article last year that an examination on Hitler's skull revealed that it was that of a woman's

posted on Oct, 27 2011 @ 07:09 AM
link
That's ridiculous. If he was indeed a woman she wouldn't have been a colonel but a house-wife. House-wife Gadaffi does have a certain ring to it.

posted on Oct, 27 2011 @ 07:10 AM
link
Far out, I don't know what to make of this.... MSM sick joke or he underwent major surgery. I must admit he does look a bit feminine in his younger years, and a bit like that plastic surgery catwoman when he was older. Wouldn't we have heard about this already when he was dead, rebels surely would have mocked him or should I say her!!!

Some people will believe ANYTHING........

(sigh) I guess next thing we know, Bat Boy will be Joining the Rebels


That is typical of the Sport to be honest. I wouldn't take it seriously at all. They sometimes have rather amusing stories (usually revolving around my -insert pet- looks like Hitler).

I quite liked the one from years ago about London Bus found on Moon, complete with picture

Seriously, this publication is like the National Enquirer. If this was in the Times, Telegraph, etc, then you would have a point about the msm but as it the Sport i wouldn't worry.


photos or it didn't happen (:

there is a photo?


Beat me to it on the bus on the moon! That was pure genius on their part, especially the obviously non photoshopped pictures proving it!


I think this is a little different because it highlights an industry wide conspiracy to demonize him.
thanks


I have to disagree with you on this one tbh. Nobody ever believes a word in the Sport - it is breasts and stupid stories to make you laugh.

Still a nice spot though so kudos to you

no i think this is important because have you not noticed every media outlet demonizing him?
this is good proof that many outlets may be making up stories about the issue.

Originally posted by Flavian
reply to post by ShortMemory


I have to disagree with you on this one tbh. Nobody ever believes a word in the Sport - it is breasts and stupid stories to make you laugh.

Still a nice spot though so kudos to you

en.wikipedia.org...
this is the owner of the sport, 68th richest man in the uk.. not super rich but rich enough to have the connections that are telling him to spread disinformation.
all media outlets have been told to spread crap about him and this is no different.. even if people dont take it seriously it can still alter peoples perceptions and thoughts on the matter..

thanks for the kudos


Honestly, it isn't important - it is the Daily Sport. As i have already said, if this was in other publications then you would be bang on the money. If this was in Viz, would you even have raised it? The Sport should be seen in the same light. Nobody reads it for actual news content. Nobody believes a word of what is in it.

It was a good spot though

posted on Oct, 27 2011 @ 07:19 AM
link
I was intrigued til I saw Sunday Sport, I'm pretty sure that paper has more articles on breasticles than it actually has on sport

posted on Oct, 27 2011 @ 07:21 AM
link
Thing is every one knows the 'Sport' is a joke and even that the BBC is nothing but state propaganda so the latest trick is to buy out Aljizeera who were fighting on the other side so people think they are seeing the other side of the story, they are not, AJ is now owned by the UK minister of propaganda.

Russia Today and PressTV are much better to watch and CNN/Sky/BBC is forced to play catchup to maintain any credability at all but OFcom is now trying to silence PressTV so that should tell you who's a puppet and who's not.


My grandad bought me a copy when i was about 12 cos he was convinced it was about Sport! Lets just say it was definitely well received by a young adolescent me!