"The planet of Shiva is beyond the seven-fold coverings of the
material world. It is eternal, transcendental, and full of bliss.
Only the greatest servants of Shiva may enter it."

In that place Shiva is decorated with splendid transcendental
garments and ornaments. There He is the master of great powers and
opulences, and there he is surrounded by many associates as splendid
and glorious as he.


What and where do you think it is?
I think its the most important place to transcend this illusion we are all in

1. mUlAdhAra chakra: At the perineum, red in color, presided over by gaNeshanAtha, accompanied by siddhi and buddhi. The associated bandha is mUla-bandha.
2. mahApadma chakra: Presided over by nIlanAtha
3. svADhiShThAna chakra: At the genital region, yellow in color, presided over by brahmA, accompanied by sAvitrI.
4. suShumnA chakra: Of six petals
5. garbha chakra: At the garbha sthAna
6. kuNDalinI chakra: At the region adjoining the waist, presided over by agni-nAtha, accompanied by svAhA and svadhA.
7. maNipUraka chakra: At the navel, presided over by viShNu-nAtha, accompanied by ramA. The associated bandha is ODDiyANa bandha.
8. li~Nga chakra: The seat that controls the li~Nga sharIra.
9. anAhata chakra: The seat of manas, presided over by rudra-nAtha, accompanied by umA. This is also the seat of hiraNyagarbha. This chakra also corresponds to causal body, dreamless sleep, pashyantI vAk and sAmaveda.
10. vishuddha chakra: At the throat, smoky in color, presided over by jIvAtman and AdyA shakti. The R^iShi here is virAT and the chakra corresponds to parA vAk, atharvaNa veda, jAlandhara bandha and sAyujya mukti.
11. prANa chakra: Near the throat, consisting of thirty-two petals, presided over by prANanAtha and paramA shakti.
12. abalA chakra: Consists of thirty-two petals, resplendent like the rising sun and presided over by vahni tattva. Its location is the trigranthisthAna, where the three granthis begin to ethereally unite. This chakra is intimately connected with the kAla and yoginI chakras.
13. chibuka chakra: At the chin, consists of thirty-four petals, presided over by prANa and sarasvatI. The R^ishi at this seat is krodha bhaTTAraka. All languages and mantras originate from this seat of the great Guru.
14. balavAn chakra: Located just below the Aj~nA in the nasal region, consists of three petals: red, white and dark in color. It is this place which is described as prayAga which is the confluence of the three streams of gangA, yamunA and sarasvatI represented in the body by the three nADis, viz. iDA, pingaLA and suShumnA. This chakra is presided over by praNava and suShumnA shakti. The R^iShi of this seat is mahAha~NkAra.
15. AjnA chakra: Between the eyebrows, shining with the hue of mANikya and consisting of two petals, presided over by haMsa and suShumnA shakti. This chakra corresponds to the state of vij~nAna, anupamA vAk and the half mAtrA of praNava.
16. karNamUla chakra: Located within the auricular region, consisting of thirty-six petals of mixed colors, presided over by nAda and shruti. This is the seat of thirty-six mAtR^ikas.
17. triveNI chakra: Above the brows, represented as a twenty-six lobed circle with AkAsha as its R^iShi. It is intimately connected with the adhaH triveNI or the balavAn chakra.
18. chandra chakra: In the forehead, consists of thirty-two petals, presided over by the moon and amR^itA shakti. The R^iShi is manas with its sixteen kalAs. It is this chakra that is esoterically described as the mansion where sun goes to drink nectar.
19. amR^ita chakra: Located near the chandra chakra, slightly upwards. Presided over by the moon and amR^itA shakti and the seer is AtmA. This is the seat of gAyatrI named kAmadhenu, represented as a cow with four teats: ambikA, lambikA, ghaNTikA and tAlikA. She has a peacock’s tail, a horse’s neck, an elephant’s tusk, a tiger’s arms, a cow’s horns, and wings representing lIlA brahma and hamsa. From the udder of kAmadhenu gAyatrI, nectar or amR^ita is perpetually streaming down. mudrAs such as kehcharI, viparItakaraNI etc. are aimed at controlling this chakra and check the downward flow of this blissful current. The yogin who has obtained access to this chakra becomes immortal and is free from the effects of kAla or time.
20. brahmadvAra chakra: Located above the forehead, shining with hundred petals like the multi-hued rainbow.
21. akula kuNDalinI chakra: A lotus of six-hundred petals, seat of akula kuNDalinI.
22. brahmarandhra: Consists of multi-colored thousand petals, also called sahasrAra. It is the seat of gurunAtha and chaitanya shakti.
23. Urdhva randhra chakra: First among the six chakras located beyond the sahasrAra, consisting of sixty-four petals.
24. bhramara guhA chakra: Also called alakShya chakra where samAdhi yoga ensues and prANa/manas cease to work. The lotus is described as furnished with ten million petals. The chakra is presided over by alakShyanAtha and mahAmAyA shakti. The seer here is mahavishNu. The secret of piercing this chakra is through the establishment of unflinching gaze on the kUTastha. This guhA is described as being guarded by two shaktis: AvaraNa and vikSh
edit on 1-9-2011 by nii900 because: (no reason given) 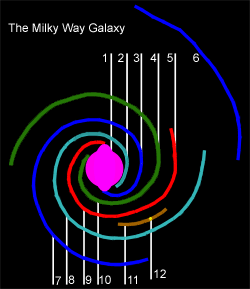 
30 Jul 2008 – But now, a new picture of our galaxy has emerged: “The Milky Way Has Only Two Arms” – Universe Today article ... It had nebula for the Andromeda nebula and other stuff. ..... But what we can say is it is going to cease being the Milky Way in somewhere between five and seven billion years from now when ...

It may be recalled that good people who die are said to have reached "Shiva loka"... Also, it is said that the Sahsasrara chakra is the gateway to Shiva loka...


Yes, this is Mahesh dhama which is above the Viraja river- therefore no birth, death, old age or disease can enter there!
All glories to Lord Sadasiva!


now.. if cygnus-orion arm IS the sahasrara actually - then,,, it may mean that, loong time ago we were taken away through-out it above yet more or for us now it is more like down to it and by IT the very milky way of ours taken in a dream - mode or by the dreams of the imposter?
edit on 1-9-2011 by nii900 because: (no reason given)

posted on Sep, 1 2011 @ 09:24 AM
link
we should move out of the M-Way-G and we have got a helper on the other side it seems
named -The Great Attractor- for its calling IT/her back to it-self?


Ah yes, when we are to be a good 'servant' we can then join this 'planet' in all its materialism glory and be God Kings.

Has anyone looked at the underlining message of 300? You need not to kneel nor to be a servant. Celebrate Life, not mysticism.

"The planet of Shiva is beyond the seven-fold coverings of the
material world. It is eternal, transcendental, and full of bliss.
Only the greatest servants of Shiva may enter it."

In that place Shiva is decorated with splendid transcendental
garments and ornaments. There He is the master of great powers and
opulences, and there he is surrounded by many associates as splendid
and glorious as he.

What and where do you think it is?
I think its the most important place to transcend this illusion we are all in

It is a metaphysical "Planet".

It is "Christ Consciousness", love of God/Source/creator and love of One-another. You can get there by releasing the Kundalini from the lower chakra's upwords and out the crown... You will need to embrace 'Unconditional LOVE" of all beings, understanding we are all connected to each other.