Second Amtrak Train versus Semi Collision in a month.

posted on Jul, 18 2011 @ 01:08 PM
link
Some of you have followed my thread here...www.abovetopsecret.com... where a Semitrailer hit an Amtrak train ultimately killing six people in Nevada last month. Apparently it has happened again. This time the driver of the truck slammed on his breaks leaving a long set of skid marks, just like in Nevada but came to a stop directly in front of the Amtrak train, which hit the truck killing the driver.


An Amtrak train collided with a tractor trailer on the tracks of a railway crossing in Maine on Monday, killing the truck driver, an Amtrak spokesman said.

Personally, I think this issue is bigger than what is being let on. Is it the inspections of the trucks, the speed limits around railroad tracks, a delay in the warnings on the gates, train speeds raised without warning triggers being moved back or further away? Two in a month is excessive especially when it is a financially failing company that seems to be making the money on them, through law suits. 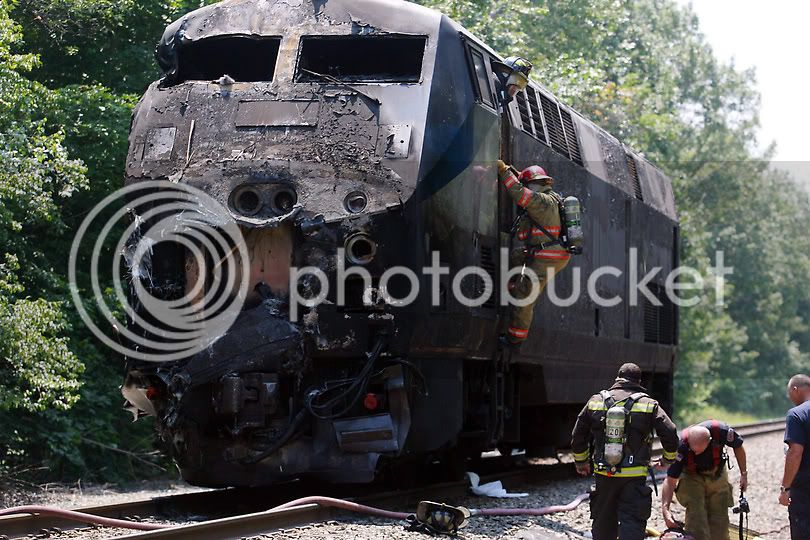 The truck driver was not paying attention.


It may not have been the train conductors fault as they must follow a set of tracks, but in both incidents, long sets of skid marks are apparent showing the drivers in both accidents attempted to stop. If the speed limits on the road and/or the tracks have been raised and the warning signals were not moved back to compensate for stopping time OR they were moved to the stopping distance of a light weight car, not a heavy semi, then it may very well be Amtraks fault or whom ever is responsible for the tracks and safety as the tracks are used by different companies.

posted on Jul, 18 2011 @ 01:37 PM
link
Do rail collisions usually get this much media attention? It's fairly common (well common enough anyway) to have rail collisions at intersections.

I haven't been following the stories, but I remember the first story was a bit more severe than this.

Could there be a campaign to demonize high-speed and alternate transportation?


NORTH BERWICK, Maine — Authorities and witnesses say an Amtrak train smashed into a tractor-trailer in Maine, causing an explosion that set both on fire and sent flames more than three stories high.

posted on Jul, 18 2011 @ 03:13 PM
link
Yes, there is a huge conspiracy against highspeed rail. It involves distracting truck drivers with their cell phones in order to run into the sides of trains at crossings.

Though the first accident, where the truck nailed the side of the train is not very common, the second, where the locomotive impacts a vehichle at a crossing is sadly quite common. Any accident involving a passenger train is usually covered in the media, but as you likely know, 98% of trains are of the freight variety. When a freight train hits a truck, it is not usually covered in the media unless there was a large derailment and/or the truck or train was carrying a HAZMAT load.

As for crossings, I have only worked on small railroads, but I was taught to start blowing the horn to signal for a crossing at about 25-30 seconds away, and these were crossings with no gates. A gated crossing will start to flash and put down the gates within about the same timeframe, there is no need for a truck driver to slam on his brakes unless he is not paying attention. Also, you are correct in that AMTRAK runs on the track of other railroads, however while the railroad is responsible for the crossing signal, they have nothing to do with the speed limit on the road, but even going 65 mph, the truck has at least a 25 second warning.

On an interesting note, I was on a special train once with the president of a railroad and some VIPs, a so called business car train with old passenger cars from the glory days of rail. One of them was of Canadian manufacture, I believe from 1910. While we were on the trip, the 2nd to last car of the 4 car train was hit at a crossing by a guy driving a pickup who was quite drunk, as you might imagine. Luckily, the old Algoma Central car only had its generator knocked off its underside.

And if you want to get into a consipracy about high speed rail, even the most ardent railfan will tell you it is a pipe dream. Even if we were to get the highest of high speed trainsets, which would require building special tracks with no road crossings(via raised track and viaduct/underpass) it would never be practicle in America. Our large cities are just too far apart, other than the east coast!


I suggest that an indepth investigation be done of the drivers, those that survived or died.
Could be a new type of terrorist attack. After all, TSA is doing such a wonderful job of keeping the airways safe.

posted on Jul, 18 2011 @ 03:28 PM
link
Are you joking? I hope so. You do know you can find out all about this accident and any others on the NTSB website. Piss tests, blood tests, STD tests, everything will be tested. They will even reconstruct the accident to find out if the gate and signal was working properly.