An unidentified piece of debris narrowly missed the International Space Station on Tuesday in a rare incident that forced the six-member crew to scramble to their rescue craft.

Things are fine for now. I wonder what "debris" were threatening ISS? I know there is a lot of junk out there is space, however no picture arrived yet but I believe it is good to keep an eye on this one!

posted on Jun, 28 2011 @ 09:15 AM
link
I've always wondered how all those satellites manage to stay up there without too many problems. I think I read somewhere that even the tiniest bit of debri can make a hole.


Wow, I bet that was scary. Good thing they are prepared for such situations. I would be interested to know what the debris was also. There is so much debris floating, it is sad....


although they have a team that monitors space debris and makes adjustments to the Iss to make sure they don't get into contact with the thousands of space debris they monitor. But i know they can't possibly track them all and its just a matter of time now before something breaks open our fragile tin can in space .


This one was a close call but will the next one be ? probably not .

micrometeorites is also another danger faced.


I bet it was probably debris from the Asteroid 2011 MD

The Department of Defense maintains a highly accurate satellite catalog on objects in Earth orbit that are larger than a softball.

NASA and the DoD cooperate and share responsibilities for characterizing the satellite (including orbital debris) environment. DoD’s Space Surveillance Network tracks discrete objects as small as 2 inches (5 centimeters) in diameter in low Earth orbit and about 1 yard (1 meter) in geosynchronous orbit. Currently, about 15,000 officially cataloged objects are still in orbit. The total number of tracked objects exceeds 21,000. Using special ground-based sensors and inspections of returned satellite surfaces, NASA statistically determines the extent of the population for objects less than 4 inches (10 centimeters) in diameter" -www.nasa.gov...
edit on 28-6-2011 by seedofchucky because: don't question me reason box||!

It is estimated that there are 370,000 pieces of space junk floating in Earth's orbit.

Japan apparently got a solution to solve (at least partly solve) the problem:


Earlier this year the Japan Aerospace Exploration Agency (JAXA) and Nitto Seimo Co announced a plan to solve the problem by sweeping up damaged satellites and space shuttles. They will attach the thin metal net, which is several miles wide, to a satellite and then launch the pair into space. Once in orbit, the net will be released at which point it will start picking up space junk in its path during a journey that is expected to last several weeks. Read more: www.dailymail.co.uk...

And this is an artist impression in regards to the space junk: 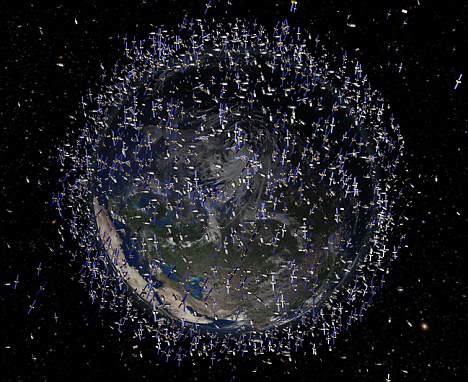 No need for us to worry about it....but it would be wise to get the heck out of the ISS. They won't survive if they stay in it.

Yeah, except Earth will not pass through comet Elenin's tail. Elenin does not cross Earth's orbital path (orbital node) during inferior conjunction (between Earth and the Sun) so no tail debris for you.

posted on Jun, 28 2011 @ 10:40 AM
link
This may sound silly but i was thinking why not a big net of some sort or something to catch this debris its got to be awufully tiresome to keep track of it all and keep it away from this and that .

why hasnt there been more of an effort to clean this up ?
edit on 28-6-2011 by jdisgreat because: (no reason given)

i meant to say the japense idea is good or other ideas out there , just more to the point is why something hasnt been done yet ?
edit on 28-6-2011 by jdisgreat because: (no reason given)


lol, your idea is brilliant. Japanese Space Agency just thought about it too, see my above posting haha
edit on 28-6-2011 by Romanian because: (no reason given)

posted on Jun, 28 2011 @ 12:34 PM
link
Well......TPTB have got a funny way of not telling us the truth, so i`m suspicious as usual..... Why is it that we have never really heard much about the ISS lately ? Why is it N.A.S.A are de-comissioning shuttles and stuff ? After the videos showing what appears to be a weapon of some sort shooting at something in space that moves pretty quick ---- and the one with all of the spaceships around the sun----and N.A.S.A saying that " Our sun is under attack by debris" ----- The International Space Station is not in the path of " space debris ", why would these so called intellegent people ( who monitor every single detail of our solar system ) knowingly move the ISS into the path of such " debris ". Seriously, how stupid do these "people" think we are..... do they think "Entertainment" has a 100% sucsess rate, and everyone has been programed with their bullsh*t ? The ISS, if it IS taking damage, is most probably under attack from what ever it is that has claimed our sun, and has been under attack from N.A.S.A and CO. for years on end. But it most probably isnt even in danger of anything..... the way these "people" work is more or less along the lines of -> scare the sheeple to attention, let them think the space station is at risk / destroyed , then we have an excuse to send large quantities of materials and such up into "space" and say its for reconstruction, when actually were adding to the station , and preparing it to protect the "Elite" when we decide to push the button and wave earth good bye for a couple of hundred years......... Wouldnt be hard to live and populate on the ISS , especially if it has been customized to do just that..... would be just like a nuclear bunker.... but all of that technology surrounding you, once your desendants returned to earth they would be the most advanced people on the planet for years to come, and thousands of years down the line, people will speak of the "ancients" who posessed un imaginable technologies. .... Think about it, how many signs have we seen that thas has been done before --- > Freemasons have got their own bible, their own language , their own alphabet that no one can understand but them, Egyptians done exactly the same, no - one alive today truly knows what hyrogliphics mean, to know such a thing, you would have had to be Egyptian its as simple as that......Japan , China , that side of the world is obsessed with animals , and dragons, i dont mean to be rude but the typical chinese, japanese facial structure resembles that of a "grey" ( RESEMBLES - I DONT MEAN.......ACTUALLY LOOKS LIKE) this to me is hard evidence of either inter-breeding or pure decendancy, the Egyptians drew on (into) the walls so the pictures would stand the test of time, and future generations of MAN - "KIND" ( create them in our image ) would be able to see how they used to live..... in harmony.... with other animals, i think that the "humanoids" with dog heads, bird heads and what not -> that was their way of saying we are all equal, were all alive and concious therefore we must respect all living creatures and see them in the same way we do eachother........The BIG thing that makes me believe everything - and i mean - EVERYTHING - is fake, is the time in between cave men , and Egyptians, nothing ads up ............. plus its said Egyptians did not keep historical documentation on anything before their time, and the only record of their time is written in the stone....... what made them write it into stone then ? with such presicion and arttistic detail ? why did they think writing into stone was the only way to preserve their story ? did they know something was going to happen ? the history books and every single religion is a pack of lies, so many points to put across to people but once you start to say no and ask why, they watch you with the all seeing eye, yup, the eye of Oris, .... "oooohhh well its all just a little bit of history repeating ".............prepare for the cleansing, say your apologies, forgive who you need to forgive, and enjoy the last year of the world as we know it people, ... none of us no for sure what is going to happen, thats why theres so many theories, one things for certain though,.. something WILL happen, and we all need to put our differences aside, stop competing in every aspect of life, like Roger Waters said... " Who is the Strongest ?..... Who is the best ?..... Who holds the aces the East or the West ?........ Is this the CRAP ! ... our children are learning ? " ......... the tide is turning people, the tide is turning. My spelling might be a little off , but i know what i mean......... i think

posted on Jun, 28 2011 @ 01:01 PM
link
wow@the artist impression..just imagine..if this was 1969, the apollo missions, i dont think thier would be enough room for the re entry capsule to get through all that!

Originally posted by jdisgreat
i meant to say the japense idea is good or other ideas out there , just more to the point is why something hasnt been done yet ?

Some thoughts about that:

1. It costs money, something not in surplus with economies as they are lately.
2. Earth orbit is a big place. Not only is the "area" larger than all the Earth's land and oceans combined, but it's also got lots of "height" or altitude. So in total the "volume" to clean up is huge. And it would take a fair amount of fuel to do all the maneuvering needed to access all this volume.
3. It remains to be seen how effective the Japanese project will be. If the relative velocities between the "net" or sheet of metal are too great, the objects could just punch a hole through the net. How do you construct a "net" that is light enough to get into orbit yet strong enough to contain this debris? Apparently the Japanese think they have so let's see how well it works. However even if it's successful at the intended mission, I still expect it will only remove a tiny fraction of the debris in orbit.


i couldnt read your entire post seriously...hate wall of text...

i cant see why NASA would lie about this event...they could have just not said anything