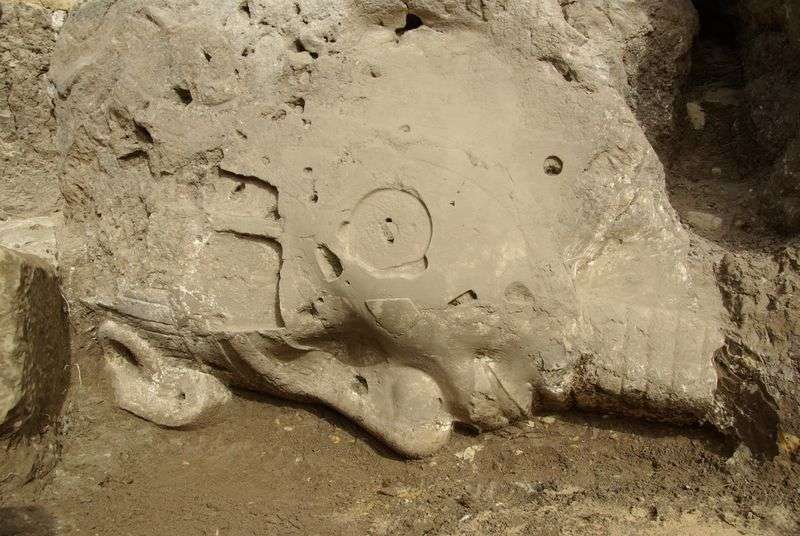 A team of Egyptian and European archaeologists has unearthed a unique colossal statue of King Amenhotep III at his funerary temple on the west bank of the Nile near Luxor, according to a statement released on Tuesday by Egypt's ministry of state for antiquities.

Finely carved in alabaster, a stone hewn in the quarries of Hatnub in Middle Egypt, the sculpture shows King Amenhotep III seated, wearing the Nemes headdress (a striped headcloth that pharaohs put on), a pleated kilt and a royal beard.

Measuring 1.20 meters (3.9 feet) in height, the well-preserved face of the pharaoh has been described by antiquities minister Zahi Hawass as "a masterpiece of royal portraiture."

Amenhotep III (1390-1352 B.C.) is believed to be the grandfather of King Tutankhamun and reigned for 38 years during a time when Egypt was at the height of its prosperity and cultural development..


This is a great find. More things that Graham Hancock have been saying and speaks about seem to come to light all the time; I'm not endorsing that everything he says is correct.

I read a few months ago that its likely and/or possible the Red Sea may have been home to many cities towns and or civilizations because it was not occupied by water 10,000-18,000 years ago. Until the glaciers gradually melted and gave rise to the oceans and sea water

Actually i think it was the Persian Gulf I found the Story. Still cool anyways
www.livescience.com...

posted on Jun, 1 2011 @ 06:21 AM
link
I just hope more and more things like this keep appearing....and maybe we'll actually get our hands on something much more advanced. Then I'd love to stuff it into the faces of the historians.


Ah, he is still there, he came back and the articles quotes him.

I just hope more and more things like this keep appearing....and maybe we'll actually get our hands on something much more advanced. Then I'd love to stuff it into the faces of the historians.

You seem surprized that the continual world wide archaeological research is finding stuff - that is the whole point. Also almost all of the disoveries are made by the mainstream. When something new is found it usually take anywhere from 18 months to 10 years for the new material to be incorporated into 'status quo', note how the Hobbit, and new genetic info is absorbed
edit on 1/6/11 by Hanslune because: Add info


On topic: what is that circular mark on the cheek of the statue? Did they grind some off or something?

Off topic: with how solid of a posting history you have, it can only be "hate" that has you with so few stars. It ain't easy being a skeptic, huh?


On topic: what is that circular mark on the cheek of the statue? Did they grind some off or something?


Hans: LOL, more seriously what do you think 'they' would fear being on the cheek of a pharoah 3,500 years ago? Then show you a photo of it? Really seriously it looks like it was an inclusion, note the two small holes inside. Something was attached to the face and lost over time, probably an ornament or cult symbol. Alabaster is fairly soft so the action wouldn't have been difficult to have done so, also note the squarish cuts on the side of his head. I would speculate that a headdress (nemes) was fitted to the Alabaster statue, however that wouldn't explain the circularish hole. Probably you'd want to take that question to the Egyptologists over at the Hall of Ma'at, good catch.


Off topic: with how solid of a posting history you have, it can only be "hate" that has you with so few stars. It ain't easy being a skeptic, huh?


It's hard to say what the circular mark is -- or WHEN it was created.

The ancients didn't have the reverence for Really Old Things that we do. So stones were stripped from the pyramids themselves and the temples to build new things. If it toppled in an earthquake, the ruined colossus was probably mined for its alabaster. My guess would be this last scenario because the mark is unique as far as I know.

The one who took out the plug may not have been Egyptian but Roman, Greek, or any of the others who followed. It'll be interesting to see what other artifacts turn up at the site. Perhaps they'll reveal more of what happened to the statue.

(adding...it's a beautiful sculpture. It must have been magnificent when it was intact!)
edit on 2-6-2011 by Byrd because: (no reason given)

Yes, I have no idea what this circular mark could be. There are other pharaoh representation, but none of them exhibit such a mark.

Anyway, first discovery was one month ago, and the head was missing at this time.

Interestingly, this 13m tall statue was made of quartzite and "was actually first discovered in 1928 and then re-hidden, according to the press release from the country's antiquities authority. Archaeologists expect to find its twin in the next digging season."