Interview With Dr. John Alexander: ATS at the 2011 UFO Conference in Arizona

page: 1
80
<<   2  3  4 >>
log in
join
share:
AboveTopSecret.com
+15 more
posted on Mar, 3 2011 @ 03:26 PM
link
Our first interview from the 2011 UFO Conference in Arizona is with the esteemed Dr. John Alexander, a retired US Army Colonel for whom few ATS members will need little or no introduction. In spite of some frustrating hardships in our attempts to get some quality interviews at this event, we came back with several gems, and our chat with this legendary UFOlogist is but one example. He provides us with some insight on his new book, "UFOs: Myths, Conspiracies, And Realities," discusses UFO debunkers and skeptics, laments over the often too-gullible true-believers, and gets into the issue of disclosure.

And if you like this interview, your're going to LOVE ATS Live this Saturday evening (March 5, 2011) as Dr. John Alexander will be our special guest for an extended live interview about his new book and all things UFO related. So watch the video and get ready to call in to ATS Live with your questions for one of the shinning stars of critical and reasonable UFO research. 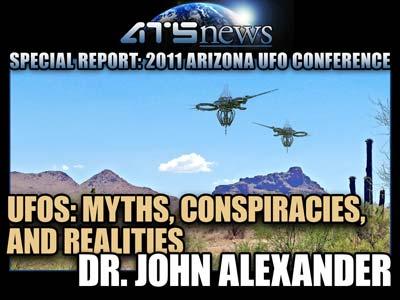 Click here for the HD version of this video


SPECIAL NOTE: As indicated, many of the conditions and facilities provided for press at this event were less than ideal. We were forced to "register" non-sequential 30-minute blocks of the press room before actually scheduling interviews -- only to find that "others" were allowed to block off several hours in the room. The organizers offered little-to-no help in tracking down speakers, leaving it up to us to hunt through the event facilities and wait until the speakers had time to leave their table in the exhibit area -- or -- interview them in the noisy exhibit area.


Cool beans, was wondering when the first videos would be coming in.

Sane, rational words, phrased in much the way I struggle to string them together, to express thought on this topic.

Best part was when he talked about the amount of times disclosure has already happened but we choose to not believe people the calibre of presidents or military brass. Instead, we tend to listen to the wildest claims thrown at us.

posted on Mar, 3 2011 @ 04:05 PM
link
Excellent interview, thanks for bringing it to us. Col. John B. Alexander, Ret. did a great interview with George Knapp on Feb. 20, 2011 on Coast, well worth the listen if you're a stream link member and have the ability to download the show.

Bill I was waiting for Mr. Alexander to hand you the book, did he give you one?

Looking foward to the next interview.

I enjoyed the way the interview went. The current flood of nonsense on this topic is really over the top and it's driving people away.

When the novelty wears off, the fraudulent YouTube Video's cease, the adolescents get bored enough to move on to their next obsession and the Fad ends, I'll be as happy as I was when the words "meme" and "paradigm" stopped showing up every day.

Time to get a copy of his new book.

Whateva: Well the reason for that is most of us here in the UFO side of ATS have seen some remarkable, extraordinary even bazaar things.
I feel we are more open minded to anyone else’s claims that they bring forward.

The Dr John Alexander says: that if you want to enter this field you must understand conspiracy theories, and if you deny it, your part of the cover up.

Whateva: So is he saying you’re either with me or against me?


I think he's saying thats what most ufologists are like. Most ufologists say the gvt is covering up knowledge about et visitation, he doesn't agree with that. but that's part of the dogma of the UFO/ eth religion


oh thanks i was kind of confused by what he was trying to get across
thank you.
edit on 3/3/11 by Whateva69 because: oops


There is an old saying that goes something like "be open minded, but not so open minded your brains fall out". I think that covers what is meant.

Blindly accepting all the nonsense, hoaxes and irrationality that has been surrounding this topic of late is being so open minded "your brains fall out".

The believers who are sensible, rational and searching for real evidence and are savvy enough to discount the flood of pure garbage being spewed lately are the ones who matter in the long run.

People who irrationally and blindly accept any crap that comes along are ruining this topic for the serious people. They also keep the Confidence People in the middle of it all by being naive enough to subscribe to their nonsense and buying their material or arguing in favor of the obvious hoaxes and scams.

Then we have those who fabricate for attention due to some self-esteem disorder. Often they seem to be so immersed in their fantasy world they resemble the fanatics at a Star Trek Convention or members of a cult. Eventually they come to believe their delusions themselves which makes it all even more troubling.

If your not a Skeptic as well as a Believer, all you are is a target and a spreader of false information and fantasies.

Deny Ignorance has a meaning that does not include being so open minded "your brains fall out".

Even though I'm likely one of the strongest Believers here, you would likely view me as a Skeptic or even worse a Disinfo-Agent (whatever that is). I've been following this since the 1960's when I saw a classic saucer shaped craft, directly above my head and up close and personal. Even so I have no idea if it was Alien or an Earthly Experimental Craft and I'm not so foolish as to assume I know what it was. That would be dishonest to me and to everyone else and it would prove I'm not capable of even basic critical thinking skills.

I'm honest with myself. I learned right away that most report's are in fact misidentification, military or fabrication and that very few report's are real, or worth the time to look into. That is just the way it is in the REAL World.

In other words the kid's are underfoot and driving the adult's nuts, interfering while the adults are trying to have adult conversations. The idea is supposed to be to legitimize these topics by denying ignorance and having adult conversations and doing real research. Instead we are seeing a carnival of madness of late.


Oh I understand that, what I don’t understand is why people lie. It just doesn’t make sense to me.
It’s not the kind of attention I would want.

I can’t say much on UFO’s, I’ve only seen a few so far in my life. I'm more interested in who they are than what they drive, float or hover about in.

But I am grateful there are people out there trying to help paste all this together.

And I'm guessing you probably see me as the naive one who believes everything what everyone says, but truly I don’t. I read pages and pages of encounters hoping for that one line that rings a bell or sparks a memory.

posted on Mar, 3 2011 @ 06:22 PM
link
Sadly he is just another in my eyes selling his book. About the only thing I could agree with is DISCLOSURE has been out for a very long time but as the saying goes:

You can lead the animals to the water..... but you can't make them drink.

IMO he is totally wrong about Mr. John Lear,

I know since I have dealt with Aliens all my life and those dang ships I think I know a wee bit more then him and he doesn't have a clue.

I enjoyed the interview. Looking forward to more!

posted on Mar, 3 2011 @ 06:38 PM
link
personally I'm not interested in the what the government says, unless one of them has an encounter and they share their story with the rest of us.

I'm here mainly to find out if anyone else has similar things happen to them, I know everyone’s story is going to be different because we are all individual and I think that’s how the “others” see us as well.

I think the “others” are learning and are now asking for everyone’s personal opinion on life.

By reading some of the encounters it seems as though the “others” couldn’t understand why we are all different and not in touch with one another as they are, we have our own thoughts and ideas and we are constantly thinking and problem solving without another person’s influence.

posted on Mar, 3 2011 @ 06:48 PM
link
Why do people say that disclosure has happened? What disclosure? The only disclosure I've seen is that the governments have documented UFO reports, which they've never denied in the first place.

And to all of those who are going to post the usual old farts claiming "we have been in contact" after decades of keeping their mouth shut I'll have you know that their testimony would NEVER hold up in a court of law. You can't deny something on the record only to speak up decades later and be taken seriously. Besides, if you claim that these folks lied to you for decades and now want to tell the truth I say you're a walking conundrum. Blind faith is not proof. In any arena.

That being said I am a firm believer that we have been visited by "something", but that's all it is, a belief.

Originally posted by yeti101
So what does he think ufos are ?

LOL I was thinking the same thing. He says everybody with a UFO experience is faking it but UFO's are real.
Hmmm?

posted on Mar, 3 2011 @ 07:00 PM
link
I don't think the American people are really give a # about Lindsay Lohan or any of the BS they feed us BUT when you have almost NO CHOICE of what to watch, you get pulled into it. It's the controllers of the media that don't want us to think too much, keep us focused on mundane things.

That's why I prefer to watch the History/Discovery channels as a lesser of the evils but even then I won't learn about what is really going on.