Are 'Villian' Jared Laughner and 911 'Victim/Hero' Andrew Brunn One in the Same.

I apologise in advance for not having the technical know-how to be able to put all photos side by side for comparison but maybe somebody at this great site will assist me.

Having recently read a thread on ATS regarding the 'demonic' picture of JARED LAUGHNER(JLP) and how it appeared to have been tampered with (by thehotsaucecommittee), i was immediately struck by the similarities between LAUGHNER's photograph and the CNNP of a shaven headed Andrew Brunn. A co-incidence i thought. Surely....

I then noticed, on the VSP of a more casual looking, capped Andrew Brunn, that only his left ear was showing. As the point of that section in the website was to indicate how single photographs of '9/11 victims' were manipulated to create both submitted victim photographs, it looked very much like his left ear had been mirrored and inserted into the CNNP as a right ear.

To my astonishhment, when i reviewed JARED LOUGHNER 'demonic' photograph, it very much appeared to me that exactly the same thing had happened. His LEFT ear seemed to be an exact mirror image of his RIGHT. JLP's left ear(and hence right ear) appears remarkably similar to ANDREW BRUNN's left ear.

Further comparisons revealed to me the following:

First of all, If you 'NOD' CNNP ANDREW BRUNN's head forward by say 10 degrees, to me you have an almost PERFECT MATCH, EARS AND ALL to the JARED LOUGHNER photograph.

VSP Andrew Brunn has the EXACT SAME noseline from bridge to nose-tip as JARED LOUGHNER.

Look at the similarities between VSP Andrew Brunns MOUTH(especially his Left Side) and mouth lines and Jared Laughner's 'wierd' elongated Left side of mouth and mouth lines.

Both CNNP ANDREW BRUNN and JARED LOUGHNER have the exact same skull proportions. I traced with pencil and paper around both skulls in CNNP and JLP and although i couldn't get both pictures identically scaled, there was still a remarkable similarity.

In the exact same location, on VSP ANDREW BRUNN and JARED LAUGHNER picture, notice a freckle/mole just below the lower lip on the right hand side of both mouths.

JLP's mouth looks to be simply a collage of both VSP and CNNP mouths. The section of mouth below JLP's lighter, longer nose 'shadow' is the same section of VSP lower lip + CNNP upper lip.

Around JLP's left eye, from below the bridge of the nose to the eyebrow seems distorted but seems to match perfectly the contour of the glasses frame seen over VSP's left eye.

The longer lighter nose shadow on JLP's chin seems to trace the outline around the area where VSP's fingers are placed upon his chin.

The darker, shorter nose lower shadow line on JLP, if extended towards his left, lines up with a faded scarline and this line corresponds to the positioning of the very visible scar seen over CNNP's upper lip.

A remarkably similar 'bright streak' can be observed in the exact same locations on VSP and JLP, below both left ears where both necklines meet both t-shirts.

A faint scar can be observed on the bridge of JLP's nose which corresponds exactly to the location of the bridge connection of the pair of glasses seen in VSP.

Both CNNP and JLP neck proportions are remarkably similar.

I believe there may be several other similarities but i will leave this to the more expert eye.

To conclude, i believe beyond doubt that JARED LOUGHNER 'DEMONIC' PHOTOGRAPH IS A FRANKENSTEIN'S MONSTER OF BOTH 'VICTIMS OF SEPTEMBER' AND 'CNN' MEMORIAL PHOTOGRAPHS OF 9/11 VICTIM ANDREW BRUNN.

I realise that this could have far reaching implications and ramifications and i hope that any who can, will join in further analysis and be able to forward the case more eloquently, succinctly and forensically than i ever could.

I hope this will be brought out into the open and bring about REAL CHANGE.

Best regards to all the good and decent American People.

Oh man...they look so much alike!

You find a lot of things that sound pretty interesting, but you can't know for sure because you don't have a picture.


i am sorry. i am relatively new to ats and dont know how to embed pictures. i am really hoping someone can help me out. this is shocking and will stand up to scrutiny, so please if you know someone who can help, i would be most grateful.

Regarding the Brunn/Loughner photo - very interesting find. One thing which I notice is the width of the neck, which is similar in both photos. Mm...nothing really seems to be as it seems!

posted on Jan, 20 2011 @ 02:19 PM
link
the three photographs i have used for comparisons are JARED LOUGHNER's ARREST MUGSHOT
VICTIMS OF SEPTEMBER MEMORIAL PHOTOGRAPH OF ANDREW BRUNN
CNN MEMORIAL PHOTOGRAPH OF ANDREW BRUNN
Please if somebody could help me embed these to bring the thread together, i would be most grateful.
I believe this analysis will stand up to scrutiny and the implications could be hugh.

...theres your link... there are lots of instructional threads you can read, so you know how to post links, photos, etc... its really simple... if you quote this post, you'll see what i did... 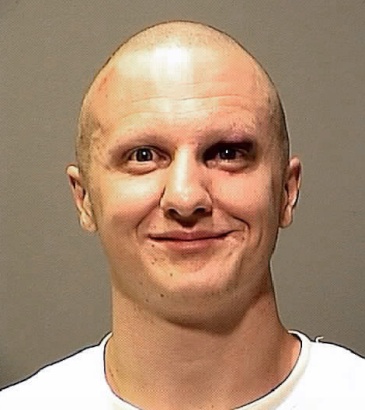 
Similar, but not the same.

posted on Jan, 20 2011 @ 02:32 PM
link
i have saved the images as jpeg's
can anyone inform me how to import them from my documents either into the original thread
or into a later post. thanks.
pshea38


thank you so much stupidgirl. if you could possibly insert the 'demonic' photo of jared loughner alongside i would be in your debt.
pshea38

I'd like a photoshop expert to have a look at the images.
edit on 20-1-2011 by wcitizen because: (no reason given)


thank you for this. if all 3 pics could be viewed on the same scale it would be clear. go through the points i have raised in opening and i am sure you will find i am right.
how can i edit these pics. into my opening thread?
thanks again everyone
pshea38


Different EARS for sure...draw a line through the eyes to the ears, they are different heights.

Also earlobes..one is attached, the other more disconnected.

Both of them look similiar and are bald and loughlin shaved his eyebrows as well as hair..so it makes him less distinct.

My question is what the physchological basis is for whacko's to shave themselves..and often more then just the head, before they commit acts?


My question is what the physchological basis is for whacko's to shave themselves..and often more then just the head, before they commit acts?

with a shaved head and shaved eyebrows he looks like a "neo-nazi skin head" and since Gifford was Jewish it is perfect ammunition for the ADL to post a story on how conspiracy theories are becoming dangerous and anti-semitic.


Still doesn't answer the question unless you think loughner was looking to give the ADL rhetorical ammunition?


i dont think jerad loughner as portrayed in his mugshot exists. almost all of his features are an amalgam of components taken and combined from the two photos of andrew brunn. it begs the question: was he constructed
along with his cryptic videos and language for certain end purposes. it also raises dark questions regarding the validity of andrew brunn's memorial photos and other memorial photographs.
pshea38