posted on Jan, 14 2011 @ 01:33 PM
link
My feeling on this subject is that global warming is a combination of natural and man made events coming together to alter our current climate. Apparently, some of the experts studying global warming agree.

"ScienceDaily (Jan. 14, 2011) — The magnitude of climate change during Earth's deep past suggests that future temperatures may eventually rise far more than projected if society continues its pace of emitting greenhouse gases, a new analysis concludes."

I probably won't live long enough to see the current debate resolved or the for and against arguments decided. However, even if we fail to adapt and go extinct it will have been one grand run we had. My best,

Totally rubish, some parts of america, the UK and western europe are going to continue getting a lot colder and more wet, we are cooling, NOT warming, but the warmists would like you to think the recent cold is the new heat, their science doesn't make any sence, and none of their predictions have come true!

Watch this space, a lot wetter and a lot more colder, if i were you i would prepare the thermals, not the shorts and tshirt.

posted on Jan, 14 2011 @ 01:59 PM
link
I've now become extremely suspicious of any data at all in support of man made climate change, because of the huge amounts of profits being gained by the proponents of this theory, because much of the data has been either discredited or seriously challenged. It's clear that earth goes through significant climate change as part of the natural cycle.

The other thing which is a main query for me is that they never, ever take into account all the weapons testing which is being done and the effect of that on the climate. Thousands of nuclear bomb tests, lasers, haarp, and so much more. As ever, they blame it on Joe Public, and as ever he gets to foot the bill, but I'm so not convinced this is the case.

I've read that the core of the earth is undergoing some strange changes and that there are huge rips in the earth's magnetic field....I'm going to look into this some more.
edit on 14-1-2011 by wcitizen because: (no reason given)

posted on Jan, 14 2011 @ 03:58 PM
link
reply to post by airforce47
I won't go through the article in that much detail, but I am sceptical of the following sentence. Quote from the article: "It warns that, if carbon dioxide emissions continue at their current rate through the end of this century, atmospheric concentrations of the greenhouse gas will reach levels that existed about 30 million to 100 million years ago, when global temperatures averaged about 29 degrees Fahrenheit (16 degrees Celsius)". I don't think this is possible, primarily because of the fact that even if we burned all the fossil fuel we cannot return to earlier high levels because much of that earlier CO2 has been sequestered by coccolithophores as chalk and corals as plankton. Also, the paleoclimate rock-strata record of temperature and CO2 stretching back 600 million years shows no correlation, so I don't know how they can justify the statement that "the study examines the relationship between global temperatures and high levels of carbon dioxide in the atmosphere tens of millions of years ago". What relationship? Are they specifically referring to this "relationship" in the paleoclimate record? Surely not! 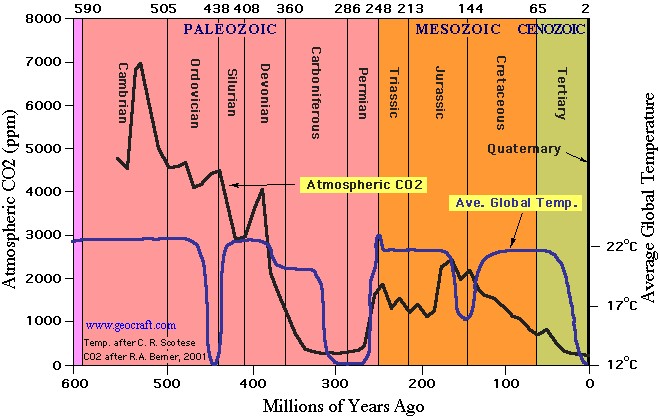 In any case, even if there was a correlation between temperature and CO2 millions of years ago a correlation cannot prove that CO2 caused temperature to change anymore then it can prove temperature caused changes to CO2. At least with the latter we have a very simple explanation - Henry's Law, which deems that as the oceans warm more CO2 will outgas increasing atmospheric-concentrations. Also, millions of years ago there was an enormous amount of volcanism which would have increased air-pressure which may have led to the extraordinarily high temperatures. I mean, how do they know that it was CO2 that did it and not some other agency, such as the solar system's emergence from a galactic dust-cloud or volcanism? After all, we are considering vaguely-hypothesised events that are supposed to have occurred over 5-600 million years ago, when the earth's external environment and its internal climate system could both have been radically different to its present-day ones. Overall, I find the article very unconvincing. It seems extremely hubristic to me that they claim to know, with such certainty, what caused these temperature changes millions of years ago when with modern technology scientists are still arguing over what is causing the temperature-changes today.
edit on 14-1-2011 by Nathan-D because: (no reason given)

posted on Jan, 14 2011 @ 05:50 PM
link
I've no doubt that climate change is real. This is firmly established in my mind. What I don't believe is that mankind is the main cause. I'm quite sure that we are exacerbating the issue, but to put the blame entirely upon us is something that I don't agree with.