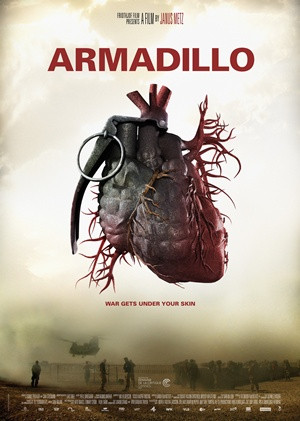 In February 2009 a group of Danish soldiers accompanied by documentary filmmaker Janus Metz arrived at Armadillo, an army base in the southern Afghan province of Helmand. Metz and cameraman Lars Skree spent six months following the lives of young soldiers situated less than a kilometer away from Taliban positions. The outcome of their work is a gripping and highly authentic war drama that was justly awarded the Grand Prix de la Semaine de la Critique at this year's Cannes film festival. But it also provoked furious debate in Denmark concerning the controversial behavior of certain Danish soldiers during a shootout with Taliban fighters. The filmmakers repeatedly risked their lives shooting this tense, brilliantly edited, and visually sophisticated probe into the psychology of young men in the midst of a senseless war whose victims are primarily local villagers. Yet more disturbing than scenes in which Taliban bullets whiz past their cameras is the footage of the young soldiers as each tries, in his own way, to come to terms with putting his life constantly on the line.


Just wondered if anyone has watched this yet? not seen it on ATS after a quick search.