BTS is dead - Long Live the Off Topic boards!

This week we'll be celebrating the dearly departed BelowTopSecret.com, and welcoming the Off-Topic section of the ATS 2010 board, so just about anything is fair game.

We'll also be discussing a little bit of philosophy, maybe a bit of Intelligent Design (maybe!!!!) and taking YOUR calls, on just about anything!

So, that's YOUR subjects, through YOUR calls, with YOUR choice of how to listen.


ATS Live would love to hear from you about our show and the topics we discuss - especially live on air! So call in and get your voice heard around the world on the radio! 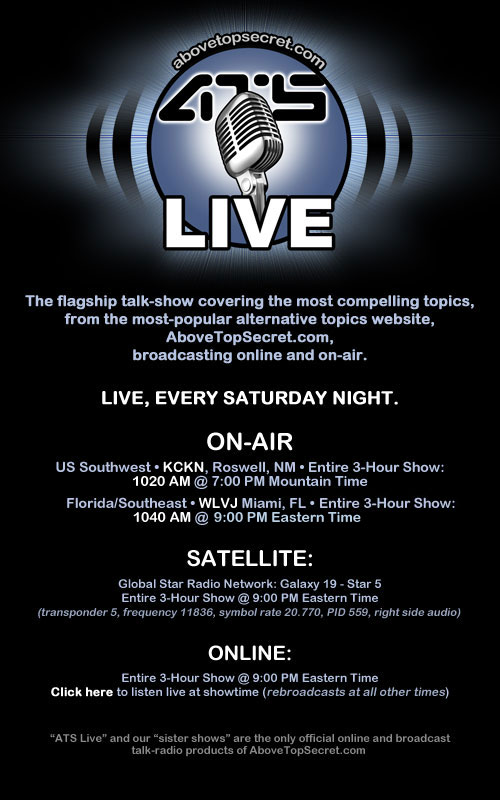 Call-In Using Skype
1) Install Skype
2) Add ATS Live Studio to your Skype contact list.
3) Send us a text message via Skype, do not call directly.
4) Wait for your position in the queue.
5) Tell us what's on your mind!

Originally posted by neformore
do you want to play a game?

how about Global thermal Nuclear War?

thats a strange game. the only way to win is not to play. how about a nice game of chess?


should I continue, or am I on the wrong track?

and here is a second line to make sure the first has company.


You're on the wrong track, and I'm messing with you

The game starts tomorrow on the radio show, not before.

I'd love to play another game!

Looking forward to the show and I''ll see you all in chat!

The good news, however, is that there is a game, and I'm game for a game.

do you want to play a game?

Trick question? I have one for you.... Do you want to create a game?

Tune in to listen to me aggravate the rest of the studio nearly to tears....

Originally posted by Benevolent Heretic
Well, I would say that I am game, too, but everyone would think I was in on it!

I'd love to play another game!

Looking forward to the show and I''ll see you all in chat!

I'll be listening Neformore & Crew. Good luck with those topics!!

Originally posted by neformore
We'll also be discussing a little bit of philosophy, maybe a bit of Intelligent Design (maybe!!!!) and taking YOUR calls, on just about anything!

respect for tackling those subjects! Peoples' passions and biological intracellular intrapersonal obligations usually act as a catalyst for passionate dialogue when discussing such things. but i could be totally wrong.

do you want to play a game?

members do enjoy the games


edit on 17/9/10 by neformore because: My evil CIA overlords programmed me to do it.

sometimes i entertain the idea that aspects of neuro-linguistical programming lead some to believe the foundations of civilization (language/communications) often are ignored due to the NPL of the psyops and all... maybe it is something in the water....

Yall know way too much about this daggum subject....

I don't care to hear my politicians talking about it.

You guys are doing a fantastic show tonight.

edit on 18-9-2010 by Esoteric Teacher because: add related to topic part

Governments show favor to particular corporations, which ultimately and completely hinders the free market or what is supposed to be a free market. Instead of the consumer deciding the market, it is the government deciding the market, with corporate influence of course, which is the opposite of free-market capitalism. It has nothing to do with taxation on any kind of deep level, other than using tax-payer money to pay corporations for services that aren't needed. It isn't about taxing corporations, so much as it is giving the corporations tax-payer money and shifting policy towards their own interests that contradict our own. The military industrial complex is a prime example of this, as is the health care reform and Wall ST. You think that health care reform would have been passed or even brought up if no corporation benefitted? Nothing gets done up in Washington that doesn't benefit the people, except for very rare occasions where their is a popular uprising, and even then it is rare.

As far as the health care reform legislation that will be going into effect, it has nothing to do with medicaid. Unlike medicaid, everyone will be forced to participate and purchase insurance from the large insurance industry. Also unlike medicaid, the payouts are going to be between us, the insurance industry and the medical industry. The government is only there to force us to buy the insurance. With medicaid, it is the government dictating the prices. I don't know who it was that I was talking to on skype about it, but the differences are huge. For the most part, the provider-payer relationship will stay the same and the government only lights the fire under the consumer, not the provider or the payer.

Lastly, I wanted to add before the discussion was cut-off, Industry will take as much as they can get away with from the consumer, so long as government shows them favor and that is the consequence to not having a free market. Because the government regulates the small guys out of the equation, the big guys can do whatever they like and for the most part, they do. This is how Raytheon charges $2M for a missile that costs a couple thousand and could not hit the broad side of the barn. This how Bell Helicopter charges $5 million a pop to paint the BlackHawk and stick a HUD in the cockpit, something a smaller corporation could do for a half million. Who do we think pays for this? The tax-payer and we the consumer are not allowed to choose, as their are no other choices, they have all been regulated out of the game and prevented from doing business or introducing their products. Then policy is set to where these things need to get upgraded every so often and the upgrade does little to boost performance or any noticable difference.

Again, taxation has little to do with it, other than the taxation of the people.

Often, people have the two party system so ingrained in their thinking or their political views, their arguments can't see past the whole left-right paradigm, and so bring everything back to the cosmetic issues bickering back and forth by the showbiz partisan acting. Their is a lot more to issues, than the one dimensional left-right thinking and how they relate to one side or the other. Sadly, when you bring up issues, people who only think in that one-dimensional paradigm will automatically relate that issue to their "half" of the spectrum and so can't understand the issue that is protruding into other dimensions, such as statist, libertarian, free-markets or centrist. Such issues as the Right's version of the free-market isn't a free market at all, but because the left doesn't challenge that notion at all, any attack on the so-called "free-market" that is pushed forward by the right (which isn't a free market at all), is seen as a leftist approach. The irony is, that the right or the Republicans who claim to be right, do not advocate free-market principals and instead, advocate corporatist and statist, Keynesian principals based upon a central market that id regulated to filth by the government and designed to benefit the few corporations that influence the government in the first place.

Good job all around on the show callers and Mods.

Yknow...for a bunch of shows I thought to myself- "how am I missing these? I'm here endlessly, yet I miss the show everytime!!!"

Then, after stupidity passed, I realized it was always Friday night!!!

Man...you guys should know that Friday night is a national Dungeons and Dragons holiday, and that almost ALL of us (all ats members, that is) are dungeon masters running a huge campaign for 8 players that can not be told otherwise.

I know what this is...its a conspiracy against D&D, me and ALL dungeonsmasters (even players!)!

You won't get away with this ATS...mark my words.

PS- Love the shows...makes me think I'm hanging out with a bunch of good folks who hate D&D.