From the cabs of combine harvesters in fields across Britain, farmers are watching the weather and wondering what price this year's wheat crop will yield. Around the world, commodity brokers are in offices, staring at screens – but their thoughts are the same. The brokers' computers report the weather from all cereal-growing regions, and graphs show how the grain price has soared. 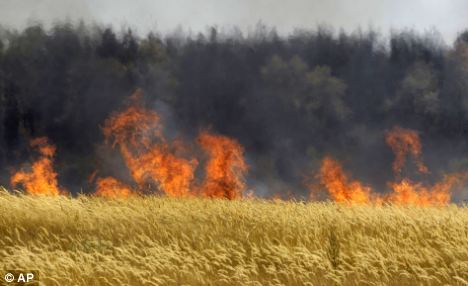 Depending on where you live, the next time you visit your grocery store, take a hint at the bread prices.

The Russian wildfires would not be that of a problem for me, since I'm from Australia, and it is a major wheat producer and exporter.

It's what any country would have done if it was under drought and wildfires at the same time, out of necessity.

posted on Aug, 7 2010 @ 09:17 PM
link
Russia’s doing the right thing for Russia, but I wonder how many other grain exporters will follow suit, if the bad weather continues? Remember there’s floods in Pakistan, and there was massive water damage in China, Australia will do nicely, British farmers are going to have a good year, but Britain won’t as we’re a net importer.

Meanwhile Ocean plankton is reportedly down 40% since 1950, and about 1% a year decline, today.
www.independent.co.uk...
www.dailymail.co.uk...

Interestingly Russia is a major source of the massive global warming gas methane www.independent.co.uk... soil that’s been frozen for thousands of years is now giving this stuff.

Could this be the year to start stocking up on seeds-can long lfe food? Would the government-msn tell us there was a food crisis until it was becoming self-evident? After all why would they want to make the problem worse by encouraging food panicking?

I still believe in global warming, just that gases like methane, and activities like deforestation to grow food for the third world, or growing bio-fuels as a form agri-business subsidy, are much more destructive than anything to do with the gas we put in cars (its mostly hydrogen anyway).
Indonesia emits more CO2 than the U.S, its just through deforestation (rather than industry). And Chinese coalmine fires emit more Co2 than all the cars in the U.S
depletedcranium.com...

That’s the real global warming conspiracy, to make us think its Western technology that’s at fault, rather than the whole of mankind’s laziness (that’s the real problem!)


I have been wondering the same thing. Wasn't Russia a big exporter of wheat? I dread to think how much my beloved Reese's Puffs are gonna cost!

Originally posted by Discotech
60% increase on price of grain ?