Can the light saber be made?

posted on Jun, 14 2004 @ 02:09 PM
link
I really don't think so, you would have to come up with a way to contain the beam of light using the light itself for containment at the end of the sword.

posted on Jun, 14 2004 @ 02:36 PM
link
I think one of the main problems is that even if you DO make a lightsaber, it would be almost impossible to use it. And I don't mean the danger of the light beam, I mean because its basically just a handle and everything else is weightless, it would be almost impossible to use it naturally as a normal sword, and you of course won't be able to use all those neat moves with the sword you see in SW.

posted on Jun, 14 2004 @ 02:38 PM
link
You could use it like a normal sword if you displaced the weight in the handle properly. It still wouldn't be exactly the same, but it would be better. I would love to have a real lightsaber, but it would be one of the most dangerous weapons ever. Just brush your leg whilst spinning it and say goodbye to your foot... =/

Originally posted by Faisca
You could use it like a normal sword if you displaced the weight in the handle properly. It still wouldn't be exactly the same, but it would be better. I would love to have a real lightsaber, but it would be one of the most dangerous weapons ever. Just brush your leg whilst spinning it and say goodbye to your foot... =/

Well I want one.


Nice sig banner Faisca. I actually debated on using the all seeing eye pyramid on mine too, but I went with Nefertiti instead. Heehee.

How ya like my G Dub goat hand pic?

posted on Jun, 14 2004 @ 05:08 PM
link
The problem is getting a beam focussed tightly enough to be able to cut through things. A bog standard laser designed to read bar codes (for example) won't do that. Also you'd need to be able to regulate the length of the beam itself. I don't think that is possible at this point since laser light just peters out naturally depending on the power source and the length of the beam.

Of course, we can always dream ...

posted on Jun, 14 2004 @ 05:22 PM
link
The containment of the light would be a problem as mentioned, but think if you made one, you could have a 1 km killer one though. You swing it around and take out half the block... ha ha 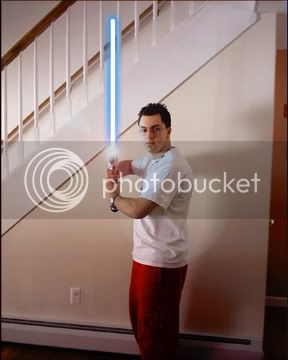 seriously.......what are the chances of fitting a small
nuclear generator on a hand held device?

posted on Jun, 14 2004 @ 05:55 PM
link
The beauty of humanity is the ability to manifest its imaginations thru clever creations.... what ever we can imagine we can create.... it just takes time

What if you ejected some sort of control wire when you turned it on? In that way you would be able to control its length. Then, you could use the anti-grenade shield currently being developed for British tanks along the wire. Although, there is still the problem of getting all the energy you would need to keep up the electromagnetic shield. There has been a patent for a really small vacuum energy generator, I guess that could fit into it and there you go, a light saber.

Originally posted by Jamuhn
Then, you could use the anti-grenade shield currently being developed for British tanks along the wire.

Although the anti-grenade shield has been described as a "force field", in reality it is capable of only discharging destructive current in short bursts. Trying to make a "lightsaber" out of this would result in something like a tazer, except that the range would be shorter... Also both the anti-grenade shield and the tazer rely on two separate pieces of metal with different potentials. The lightaber would have to be wide enough to allow for two metal rails separated by an insulator. Anyway, it wouldn't cut stuff, just zap stuff. Which is cool enough... the tazer is better IMO because it has the advantage of firing projectiles.

ADDED: Actually, if the power source for charging up this "lightsaber" were separate, say in a backpack and connected by wires, then I could see it having some staying power. However, it seems that if two of these "lightsabers" touched, it would cause both power packs to explode. A surge protector could possibly prevent that, but it would be destroyed in the process, so the next time there wouldn't be any protection. Actually to disarm such a "lightsaber" just fire some metallic projectiles at it to short-circuit it. Maybe some kind of metallic silly string. This weapon doesn't sound too promising.

if the power source for charging up this "lightsaber" were separate, say in a backpack and connected by wires,


I just checked with my geophysist friend and he said you would need a 4 inch thick superconducting cable attached to a genorator that can produce over 1 MW/minute to be able to have a workable "lightsaber". BTW for those of you who have played Star Wars: Knights of the old Republic they had somthing called a mono-filimant blade(its not called that but thats what it is..i forgot the name tho...). We can build mono-filimant blades right now, its not that difficult. It should achieve the same results as a lightsaber without the need for a power source...Of course it would't look so cool then For the hobbiests out there here is a model to make a REAL Plasma Lightsaber that 'appears' seemingly out of thin air in a dark room. Havn't seen one personally but it seems cool though. Here is the link

Originally posted by sardion2000
...and he said you would need a 4 inch thick superconducting cable attached to a genorator that can produce over 1 MW/minute to be able to have a workable "lightsaber".
[edit on 14-6-2004 by sardion2000]

Someone else had mentioned the anti-grenade shield [telegraph.co.uk] as the principle for this "lightsaber." For this reason I expected the cable requirements to be more modest, as stated in the source:

But despite the high charge, the electrical load on the battery is no more than that caused by starting the engine on a cold morning.

But what principle is the working "lightsaber" you mention based on? Does it behave like the fictional one -- does it have an energy blade that can be projected from the handle up to a certain distance, where the entire expanse of the blade can cut through most objects, but ceases to exist at exactly x cm from the grip? Would it be able to come in contact with another such "lightsaber" without ceasing to function?

posted on Jun, 14 2004 @ 09:17 PM
link
My friend was thinking about a STAR WARS type of blade contained within magnetic fields that limit it to a certain length and be able to do all that it is capable of doing in the movies. This was just off the top of his head because it really isn't his specialty(his specialty is in isotopes) so its just a very educated guess.

I'll try to get a more detailed explanation from him the next time I talk to him. But the way he phrased it he seemed to believe that the Star Wars type of weapon is possible...provided you have a portable power source that can generate enough juice.

EDIT: "A plasma field contained in a magnetic field could be constructed to create a lightsaber. The plasma could be contained in the handle, when the switch is flipped the electromagnetic field is energized and the plasma is ejected within it. Although creating the high temperature of the plasma would require a large energy supply, the lightsaber would perform just as in the movies and is not a technical impossibility." -- Michael Ernst, Student, Miami

posted on Jun, 14 2004 @ 10:37 PM
link
it would be possible to create a laser weapon that just burned right through things cuz we have laser drills like that now. just a thick beam like that would require a generator or direct power outlet or anything to that degree so it would defeat the purpose. although im sure some time in the future we will develope a technology that will allow us to get closer if not directly to being able to create one.