posted on Nov, 23 2009 @ 03:20 AM
link
After watching Moon Rising, I was inspired to look at some pictures of the moon taken by Japans Jaxa agency. I could not believe my luck as the first picture I clicked on displayed an unusual artefact which must be huge!!!

Below are pictures showing an unzoomed and zoomed versions of the picture, you can view the picture yourself on the JAXA website at this address.....

Enjoy my find and any comments would be appreciated


i see it. kind of looks like a stargate lol. maybe the gov is teleporting agents to the moon now. could this just be a rock left over from the asteroid or meteor that caused this crater? i think it's a likely explantion.

But in all seriousness, more interesting are the streaks. It almost seems like there was a vast system of rivers at a certain point.

posted on Nov, 23 2009 @ 04:38 AM
link
The 2 arcs look very much artificial to me as they arc to form a kind of circle, im not sure if the 2 structures actually meet but you can definately see the rim of the big crater inbetween the 2 arcs so it is not another crater as suggested, and the image suggests that they are arching upwards and not actually laid on the moons surface.

Thanks for the comments, they are appreciated

posted on Nov, 23 2009 @ 05:06 AM
link
Nice find, look what i find in a crater on my second pic.
Looks like a Ufo or a satellite dish and cranes in the backround.
There are more things like this in any jaxa pics, i post it later
when i find it (chaos on my HDD). 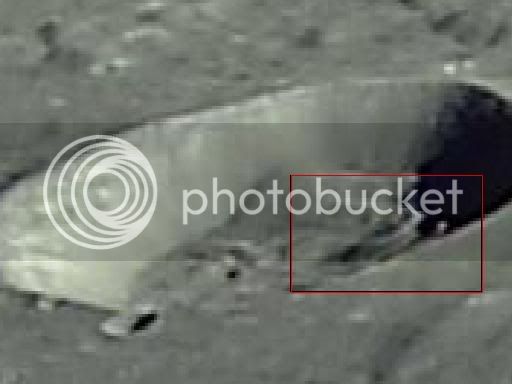 
what I'd like to see is the hires of the area of delporte, lutke, and izsak d craters...so we could finally resolve that retiredafb mess


After watching Moon Rising, I was inspired to look at some pictures of the moon taken by Japans Jaxa agency. I could not believe my luck as the first picture I clicked on displayed an unusual artefact.....

This is not surprising. Once one has a mindset to see what they believe they will be able to pick stuff like this out of random rocks and dirt anywhere, not just on the moon. It's called Pareidolia.

My neighbor's daughter was standing around a few weeks ago while her parents and I were gabbing when she pointed to "scooby doo" floating overhead in the sky. Trying to explain to a child of her age that what she is seeing is nothing more than a trick of light played on us by condesned moisture in the form of a cloud is impossible, so to her, at least for a few more years, it will be "scooby doo".

But the difference is, she will grow up quickly and know that they are clouds. It is a shame many of us around here never seem to grow up, and still ignore hundreds of the most probable answers while leapfroggin to the least likely conclusion because that is what we want to believe.

OP, I see both scooby doo and mickey mouse in your photo now that I have them both on my mind. See, even I can suffer from ignorant delusions from time to time.


To be calling people "ignorant" for displaying an open mind is slightly contadicting yourself dont you think. I opened this thread because I wanted peoples opinions on the possible nature of these structures, and to generate a debate. Given the nature of your post I would suggest it is you that is "ignorant" as to not explore the possibilities of what this may be!!

posted on Nov, 23 2009 @ 06:58 AM
link
Oh, I can't believe it. I can see some things in this Photo I just can't explain. Are they Craters I see? How did they get there? Did Alien Spacecraft Land there and did their Retro Thrusters leave craters on the Moons Surface? That's the only explanation I can think of..

Of course Meteors could've done it but I find that highly unlikely.

posted on Nov, 23 2009 @ 07:01 AM
link
Do you know the name of the crater? It might be good to look at other sources with photos of this crater from different angles (if any exist).

I'm wondering if it is some kind of artefact of the photography, maybe similar to those little + signs that appear in the Apollo photos. It almost looks like a celtic cross.

If not then it may be some natural geology on the outside of the crater which is lining up with some on the crater floor to create an optical illusion. This would only work from that one vantage point so it would be quite amazing if this was such a 'lucky shot' but not beyond the bounds of possibility. Looking again I think this is more likely than a photo artefact.

It certainly looks strange and I understand why you were impressed - doesn't mean you're suffering from an 'ignorant delusion'.

posted on Nov, 23 2009 @ 10:58 PM
link
To everyone reading this reply, especially the OP. It's fun and all that to scour lunar photos looking for things that, to you, look unnatural so that you can then title your thread "Lunar Structures" this or "Lunar Anomalies" that. But do more research before you post such as finding the location of the area, the names of features (craters, rimae, maria, etc.), and any other usable information so that we can go look for ourselves as there are many sources where various views of the same area may be found.

The area of the OP's photo is viewable at the digital Lunar Orbiter Photographic Atlas of the Moon and the area of interest is: www.lpi.usra.edu...

Because the OP did not provide any info I had to whip out my 9-pound published version of the Atlas and look through 286 PLATES before I found it! In order to be helpful with appropriate information I have to go through this almost every time. Please! Do some research before posting.


Now that's dedication!. Thanks for doing the work. I think I've been able to see a correspondence between the two images and worked out how the optical illusion has been created.

The bottom line points to what I think is a hollow just outside the rim of the crater and as you can see it occurs in both photographs. The 'top' of the cross or the 'arches' if you prefer is being created by a mound or group of rocks in the centre of the crater. These appear longer in the right-hand image but due to the angle the left-hand photo was taken at, the mound undergoes a foreshortening effect.

It's very similar to what artists do when they create Tromp l'eil or anamorphic art where an image only makes sense from one specific angle.

It's still quite amazing that the photo was snapped at just the right angle for the illusion to appear.


The detritus and crap at the bottom of the crater, combined with a much smaller crater located very close to the rim, are creating the effect of an "artifact" when photographed from that angle.

posted on Nov, 24 2009 @ 07:29 AM
link
I'm not experienced with analyzing these things so I have a question about craters: when a crater is made, where do the meteorites go to? They're not in a lot of the photos I see so i'm guessing that somehow they hit the surface and then fly elsewhere.

...unless maybe the meteorites are VERY small and it makes an extremely huge crater 1000 times the size of itself and it's laying in the very bottom of the craters.

Originally posted by jimmyjohen
...But in all seriousness, more interesting are the streaks. It almost seems like there was a vast system of rivers at a certain point.

The grooves are "Rilles", and have been known about since the 1800s. They are formed by ancient lava flows billions of years ago. Lava flowing in a tube under the surface cooled and contracted. The surface above then collapsed and formed those channels or grooves called "rilles".

The object pointed out by the OP could simply be a rock. We have seen odd-shaped rocks on the Moon before that are ejecta from asteroid impacts. This object may have a bit of an odd shape, but there's no reason to believe it is anything more than an ordinary boulder.