Project Blue beam has a nefarious story behind it. Until now, I wondered how a hologram could be projected over the Earths atmosphere, so that the mass media could interpret it as the “Second Coming”, and dupe the people of the world into thinking that The Messiah had come. Now, hundreds of people, saw Black Barnt 7, and thought it was a UFO. What I see from the YouTube video,
www.youtube.com...
is a cone/circle of light descending from the heavens. It’s not a far stretch of the imagination into believing that the technology could be used, to project a moving hologram into this man-made theater screen.
Then there is the cloud circle seen above Moscow,
www.youtube.com...

Could this be the beginning of the End? What do you think?

The USAF was originally going to attempt to display a hologram of allah above Bagdad in 1991.
Indeed, Chadwickedus doesn’t have “the need 2 know” to comprehend what we have in the U.S arsenal.
By the way, about your name, would you have been a member of Club Huron, or a squadron leader at The North Base one time?

As I get older, my memory tends to fade.


When you say we do you mean you were one of the students from the Air University who wrote the fictional paper?

Because that's what your snippet is from..A fictional project carried out by the students of the Air University in 1996 with information advisers such as the creators of Star Trek, RoboCop and Terminator.


As usual you fail to share the full picture of things you present, you just show what you want people to see.

So since I don't have to be 'cleared to know' because the paper is completely unclassified here is the FULL paper:

And a nifty disclaimer:

2025 is a study designed to comply with a directive from the chief of staff of the Air Force to examine the concepts, capabilities, and technologies the United States will require to remain the dominant air and space
force in the future. Presented on 17 June 1996, this report was produced in the Department of Defense school environment of academic freedom and in the interest of advancing concepts related to national defense. The
views expressed in this report are those of the authors and do not reflect the official policy or position of the United States Air Force, Department of Defense, or the United States government.
This report contains fictional representations of future situations/scenarios. Any similarities to real people or events, other than those specifically cited, are unintentional and are for purposes of illustration only.
Mention of various programs or technologies throughout this paper does not imply Air Force or DOD endorsement of either the mission, the program, or adoption of the technology.
This publication has been reviewed by security and policy review authorities, is unclassified, and is cleared for public release.

**Fixed external tags due to whinging.


You could have at least taken the time to tidy up that disclaimer. It only would have taken you a few seconds.

*Readily deployable holographic projectors would be a useful component of our arsenal of psychological warfare tools. This is undeniable.

Originally posted by Exuberant1
reply to post by Violater1


Since when has it been about being 'negative' or, for that matter, 'positive'? Surely it's about critical thinking, and the point Chadwickus makes is a fair one and a fundamental problem with any kind of 'projection'.

What's the likelihood that some American fighter doesn't try shooting this projection out of the sky anyway in some bizarre 'holographic friendly fire' incident?


By unsophisticated, they could be referring to those in the mideast theater or even those who are unable to believe that holograms can be used in such a way, or those who just do not know about the technology at all.

As a short term countermeasure, a holographic projector could be an effective tool. They could be used to misdirect the attention of an enemy sentry long enough for them to be neutralized - or to temporarily trick an adversary into thinking that they were facing a larger or more sophisticated opponent than they had intended.

The dust in the air of the Mideast region could be utilized in lieu of the fine water droplets in the atmosphere that are necessary for the hologram to be useful/effective in the manner in which we are speaking of.

Certain fine materials dispersed above and throughout the battlespace could increase the effectiveness of the technology and could be used to ensure a level of functionality regardless of the environmental conditions.

Originally posted by DaMod
This is all well and good, but did anyone notice the flying object in the 1st video?


I did notice the object in the Black Barat 7 video, but I did not pay any attention to it. Since you pointed it out, I used my projector and threw it up on my wall. AHHH, how could I have missed a color changing, disk shaped UFO!
In the second video, many skeptics call this a hole punch cloud.
Here is a link to the NOAA website describing what a hole punch cloud is,
www.srh.noaa.gov...
However, I’m trying to find a radar cross section from NRL Monterey to see if it resembles the NOAA weather radar picture, of the hole made from HAARP over the south west United States.

"Pentagon Budget Report Shows how much spent and completion deadlines 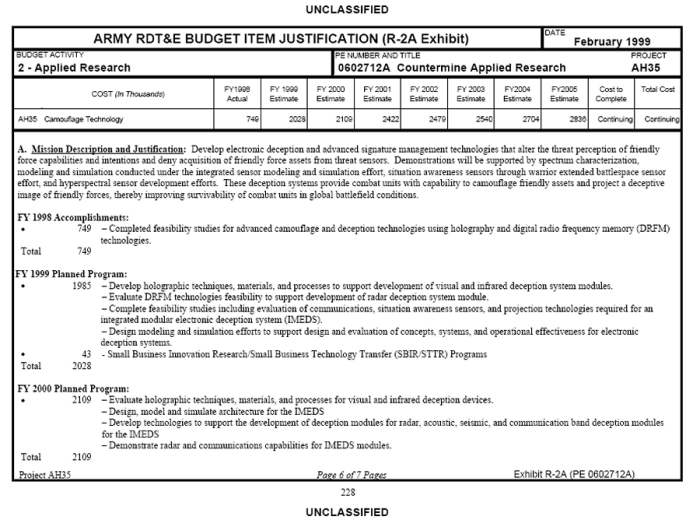 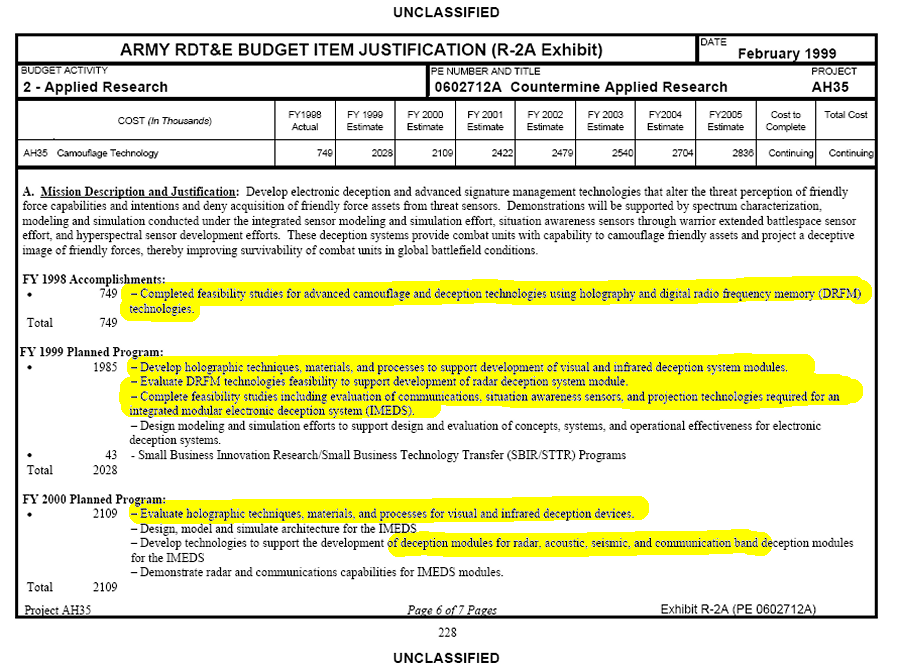 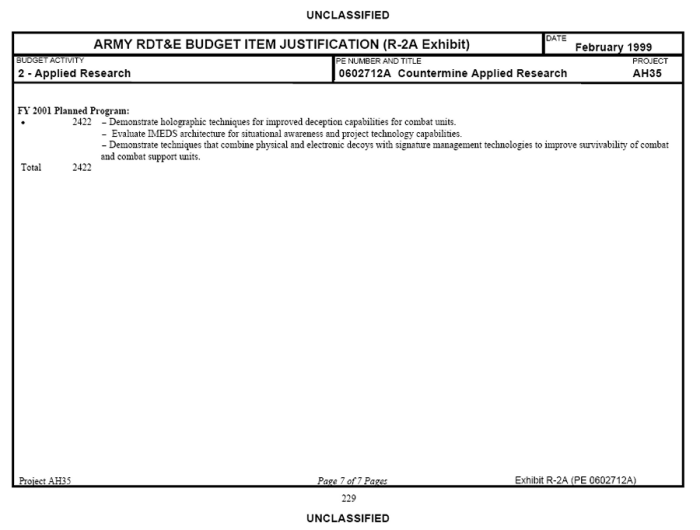 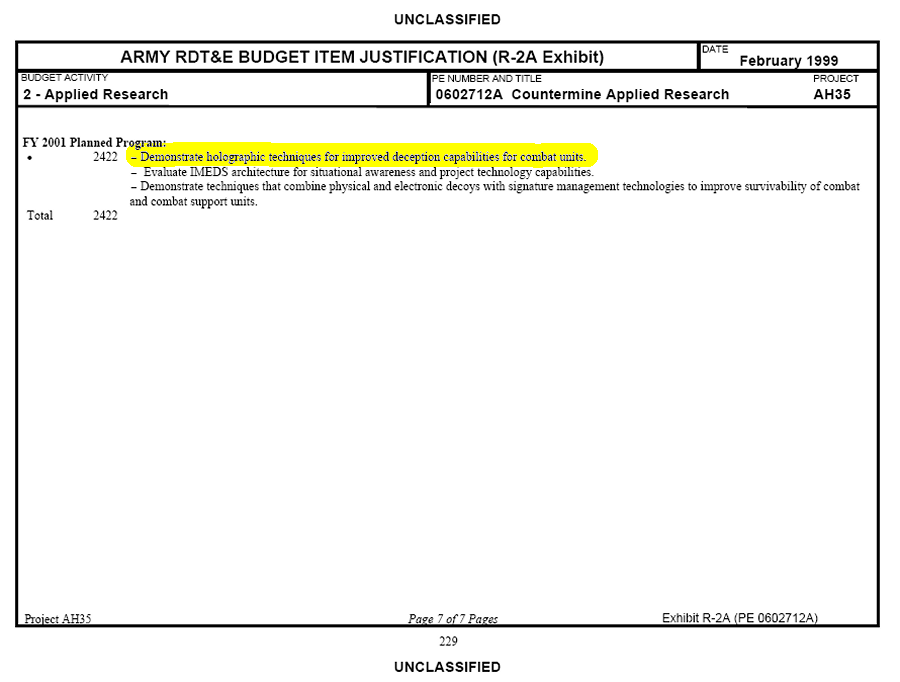 More info can be found at Zorgon's original post: www.abovetopsecret.com...


And here is some interesting information presented by ATS:


Holographic projection. The Defense Weekly article describes a quasi-information warfare/psychological operations program that was first discussed by the Air Force after Operation Desert Storm in the Gulf War.

This involves projection of a three-dimensional holographic image to act as a decoy. The Pentagon spoke openly about its use of holographic projections during discussions of its non-lethal weapons program back in 1994. Since then, the program disappeared, most likely becoming a black project.

The article concluded by stating that the U.S. Army's JFK Special Warfare Center and School disclosed back in 1991 that it was looking to develop a 'PSYOPS Hologram System' with the capability to "project persuasive messages and three-dimensional pictures of cloud, smoke, rain droplets, buildings, flying saucers and religious figures.

posted on Oct, 14 2009 @ 05:10 AM
link
So how does blue beam work? I'm a 3D modeler/animator jezz I would love to do a Harry Potter DeathEater symbol and project it onto the night sky "That would be a Hoot!!" The End Is Neigh!!


It's all very well that the military has a budget for holography, but it doesn't prove Project Bluebeam exists.

This article presents some real world applications for militarised holography:

Real holograms will not fool people at short range and they do not move, nor can they be ‘projected’ into a remote location. But they might still have their uses.
One of Watt's suggested applications is 'deception in an urban environment'. Take a shop window and replace it with a hologram of a window display, and you have an apparently innocuous space where troops can be stationed without any hint of their presence. A vehicle (a car or bus) could use similar trompe l’oeil effect.
There is the possibility of using holograms to create ‘virtual forces’ or ‘virtual obstacles’, but the problems are all too apparent. The situation is much better indoors where the optical environment can be controlled. Dr Watt suggests installations could have virtual doors, walls and windows as ways of confusing or misleading intruders.

Small scale in controlled environments which would also reflect the budget outlay posted above.

Originally posted by DaMod This is all well and good, but did anyone notice the flying object in the 1st video?

If you click on the more info tag next to the video, it says, that it is an air liner landing at a local airport, it looks fast because of the frame rate of the recorder, seems they skipped through and cut frames out to speed up the effect.

IMO holographic images in the sky would be used by adversing agencies to throw idea's at us, I heard a few years back about a plan to study the feasibility of projecting adverts onto the Moon, which pissed me off, no body has the right to do tha, if they did I will start a resistance group to destroy the tech, Moon is good as it is, dont need adverts like those.

Originally posted by Chadwickus
reply to post by Violater1

I have thought all along that Project Blue Beam was a Tin Wiki idea from the get go. But after seeing that ring descend from the top in a stair step manner, not just a flash of light, it causes me to ponder what this is all about.
However, your disbelief in the advancement of NWO technology is just lacking in education. I have on occasion hovered over Plant 42 in near by Palmdale, so I think I’m a little qualified to know that I have seen some amazing technology in my prime. Perhaps you would have said that 20 years ago, lasers in aircraft would be only in Buck Rodgers shows. I have also flown into Alice Springs Airport to just pine around in the NT for a while. The Red Ochre, in Todd Mall is where I have gone on an occasion to get some shrimp with some of my mates. If you get a chance to go there, tell Ron Thynne I said,” Gooday mate.” Perhaps we can even share a brew together.
By the way, The Red Ochre is owned by Aurora. Interesting name for a local company that is near Pine Gap.

posted on Oct, 14 2009 @ 11:58 AM
link
I know this might be a tad off topic, but in the Black Barnt 7 video the first part looks to be normal speed and then when it says that it is normal speed it actually seems to be in slow motion. Am i missing something?