Whilst perusing the latest video releases by Martyn Stubbs, I noticed a most peculiar donut-shaped UFO being filmed during one of the missions.

The video is from STS-61 and in this UFO video it is readily apparent that the camera operator filming the UFO was aware of it. He even zooms in on the strange object and follows it for a brief time. However, it seems that the camera operator must have realized that this downlink is being watched by members of the public because he quickly cuts away....


Depending on your stance, it's one of the following:

A perfectly round ice particle


I think it's the last - and the last part of that as well.


Good find - haven't seen this one before...

posted on Sep, 5 2009 @ 12:17 PM
link
The "blob" that was focused on looks like the "blob" in the other thread that was up on the NASA screen. I love these videos. Thank you for them. I find them relaxing for some reason!! Call me crazy, I don't know.

Originally posted by j.r.c.b.
The "blob" that was focused on looks like the "blob" in the other thread that was up on the NASA screen.

Is this the 'blob' you are referring to? 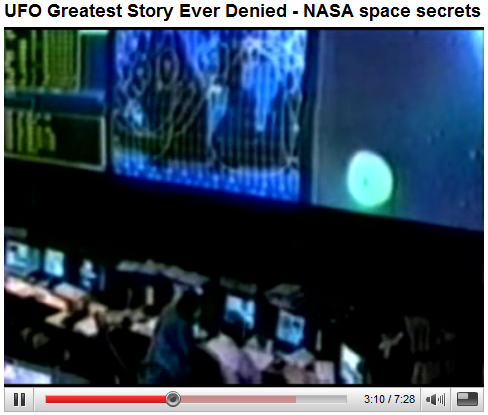 posted on Sep, 5 2009 @ 12:44 PM
link
YES!! That's it!! Thank you. I called it a "blob" only because it reminded me of a jellyfish. Seriously, I could watch these UFO's all day. I think it's the whole scene of seeing them flying around in space that seems to relax me. I think they are beautiful & mysterious. Thank you again.


(there is a huge thread on it this one somewhere)

The species has been tentatively named Plasmoidococcus Plasmaspherus by this researcher.


However, it seems that the camera operator must have realized that this downlink is being watched by members of the public because he quickly cuts away....

It could simply be, that because space junk is an ever pressing issue in orbit, that whenever an operator sees anything that shouldn't be there he checks it out for a minute. I mean, the hubble wasn't going anywhere and he could take hours and hours of hubble footage. Maybe he swung it over, took a quick look and realized it is nothing other than typical space floating junk and swung the camera back. See, I can play the same way and impose whatever thought process I want on the operator's movements too, lol.

But, realistically, logically and using even a small amount of common sense, I would say that these things are not a big deal, not ET's or even craft for that matter. Just junk really. It seems you really have to have a religious type desire and faith to jump on the least likely conclusion and ignore anything that might contradict it or add your own mental twist in order to make it fit.

Engaging in speculation again I see...

I am always glad when you do, especially when you are thoughtful as you have been today.

posted on Sep, 5 2009 @ 01:12 PM
link
That's all we can really do is speculate around here. Seldom do we have enough information to pin something down 100%, hard to disagree with that. So there is nothing wrong with speculation. But it should be done a hell of a lot more responsibly that you see around here on a daily basis.

You can say what you want about me, or others that refuse to set aside common sense, reaosn and logic to arrive at irresponsible conclusions. But one thing is why bother? Folks like me are such a minority in this subject, we don't stand a chance of being heard by the general public or the average Joe. Thier too busy laughing at us as a whole.

I think the stuff in this video, and almost all of Martin's stuff is nothing more than misunderstanding combined with sensationalistic "look at me!" syndrome. I don't know what bothers me the most, the fact that guys like him do this type of thing, or the fact that there are so many that swallow his bull with a smile then beg for more.

posted on Sep, 5 2009 @ 01:13 PM
link
I just don't think these things are ice crystals or space junk. Space would have to be pretty full of that stuff since we have so many shots of these things.

Every time I see these things all I can think about is the Dropa stones.

posted on Sep, 5 2009 @ 01:29 PM
link
The space shuttle camera uses a mirror lens, which will create a 'hole' appearance in the middle of the object being focused if it is out of focus. This is amplified when the object is brightly illuminated with a black background. The only similarity to the Dropa stones is the problems with the lenses on the camera, not the characteristics of the object being photographed.

The 'tether' incident is another example of this.

The circle you saw was a micro dust particle out of focus and white balance.


Whilst perusing the latest video releases by Martyn Stubbs, I noticed a most peculiar donut-shaped UFO being filmed during one of the missions.

Very nice and clear BOKEH, also with cat-eye effect too (toothwalker.org...), like here:

which means the object in question is small and closer to the camera, beyound near limit of the depth of field interval of the lens (catadioptric mirror).... a garbage (debris) particle common there as a byproduct of the shuttle.
but some ingenious people are able to attract interests (or money?) even from tiny particles of garbage.


So you are from other disinfo agency, since there is obviously a "critter" ("donutus circularus" in latin)

posted on Sep, 6 2009 @ 05:22 AM
link
I'm still waiting for one of the debunkers who claims this is spacejunk to provide an image for comparative analysis.

Here are some images for comparison:

(some are reposts, but I figured that it is important to get them all in one place for the benefit of the members who haven't seem them before):

A similarly shaped UFO was spotted during STS-115. *Note the trails of plasma flowing behind it:

[atsimg]http://files.abovetopsecret.com/images/member/d79e8e9c778e.jpg[/atsimg]
*the above set contains two images, the third being a magnification of the second.

Here are some more UFOs (also known 'as critters') from the infamous STS-75 Tether UFO Incident: 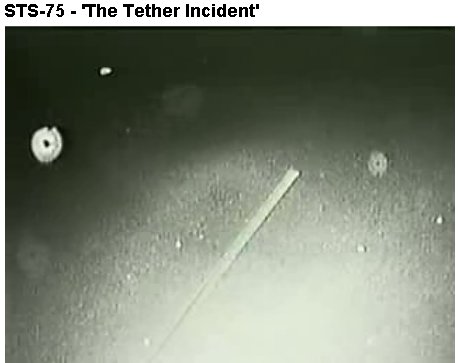 -Note how the position of the notches change an are not all in the same positon: 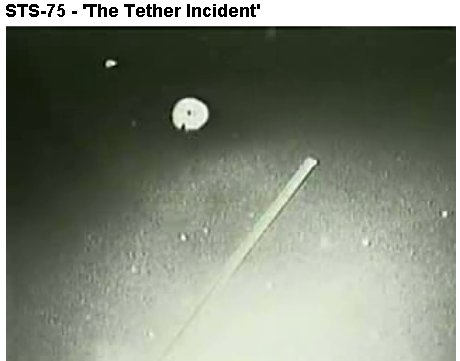 In this series of screencaps, one can see how the critter changes shape from one frame to the next:

Zorgon found this one on wikipedia (also from STS-75 Tether UFO Incident):

*Here is another UFO onscreen at NASA Mission Control - this one is from STS-75 too:

Same UFO:
[atsimg]http://files.abovetopsecret.com/files/bb261ab621b502c6.gif[/atsimg]
(Animation created by a member of Pegasus)


*A UFO like the above was filmed during the STS-119 mission:

Have a look at the pulsating critter at 0:33 into this video - looks familiar:

Believe that if you want.

The subject has always been a laughing stock, a subject of derisive scorn and mockery (such as the kind you have just administered to me earlier in the thread - and you did so knowing full well that I am a serious researcher of this phenomena)

Unfortunately, it is the nature of the beast. It always has been.

There will always be people such as yourself who actively discourage -by way of mockery and insult - those of us who are actively researching the matter and who go out of the way to present our research in an open-source manner; knowing full well of the kind of people it will attract and the risk that such a presentation implies.

It is just so unfortunate that we have people who seem to be doing their darnedest to convince researchers such as myself that such contribution is not worth the effort. It is as if you stop by just to chase people off and discourage them.