What's going on with Spirit Rover?

I've just been browsing some the latest pics and found that one set of wheels may be stuck or dragging something along.


The rovers are six-wheeled, solar-powered robots which stand 1.5 m (4.9 ft) high, 2.3 m (7.5 ft) wide and 1.6 m (5.2 ft) long. They weigh 180 kg (400 lb), 35 kg (80 lb) of which is the wheel and suspension system.
When fully illuminated, the rover triplejunction[22] solar arrays generate about 140 watts for up to four hours per Martian day (sol). The rover needs about 100 watts to drive. Its power system includes two rechargeable lithium ion batteries weighing 7.15 kg (16 pounds) each, that provide energy when the sun is not shining, especially at night. Over time, the batteries will degrade and will not be able to recharge to full capacity.

If you look at the above image you'll see in the top left corner a small black mark in the sky.

I actually found this mark in another photo and wondered what it was so I zoomed in and had a look.. it's a bit hard to say exactly what it is.. so before I made another thread and cried "black tubular UFO in Mars sky!!! amazing picture Mars.. blah blah woot !!".. I decided to check some of the other pics..

Oddly it only seems to be in a few and not all. Is something loose on the camera?
[atsimg]http://files.abovetopsecret.com/images/member/36265383d9ca.png[/atsimg]
marsrover.nasa.gov...

posted on Aug, 21 2009 @ 07:12 AM
link
One of Spirits right wheels stopped working 3 years ago so it has been using just 5, and recently it has been stuck in very loose and fine martian soil where its wheels dig into the soil and just spin. Thats what is in your pic just leaving tracks in soft soil, maybe even dragging a wheel. And also it had problems with a jammed left hand wheel. Spirit has outlived any expectations and is starting to show its age, different bugs and glitch's are popping up.
I would also imagine its just dirt on the lens in the other picture.


Thanks for that pazcat.. i wasn't aware of those issues.. I had not seen these tracks like this before.. guess i must have been looking at some real old pics then

yeah the black object does appear to be something on the lense.. it is very close and has quite sharp edges.

posted on Aug, 21 2009 @ 07:28 AM
link
It could of been pics from earlier this year though, the rover did get stuck in soft soil and had some other problems.
Im no photo expert but that would be my guess but it might not be dust on the lens but thats where my money would go.


One of Spirit's six wheels has not been spinning since 2006 -- so that wheel has been dragging for three years.
Link to Article About Wheel problem

As for the big speck on the lens. It's been there (on the Navigation Camera's "left" eye) ever since the Spirit started taking pictures. It's in all of the pictures from that particular camera.

The estimated lifespan was something like 3 months wasn't it? Maybe NASA should start making cars instead...

posted on Aug, 21 2009 @ 08:43 AM
link
The all new NASA rover saloon.. built with you in mind.. complete with centrally locking wheels and dodgy bits that keep hanging on for dear life.. but it'll keep going .. no matter the weather.. fully recharged in 95 hours, you too can reach speeds of up to 20 mm's a second..

great fun for all the family.. blah blah..

Yes, I've been seeing that spec on the lense a lot more in some of the other pictures now.. it does seem to be a bit of dirt or a portion of something very close to the lense.

400lbs in weight.. it's amazing how we got them off the Earth, let alone land on a planet so far away.. and keep running all this time..

quite an amazing effort really..


Hah what a sale pitch.... sign me up! Thinking about it though does anyone know why the rover is so slow? I know it takes a while to send it commands and such and they don't want it running into a rock but...


I think it has something to do with the way they have stuffed 400lbs of metal onto a motor no stronger than a 100 watt lightbulb..

I've posted some technical info in the opening post..

a turbo version would be a lot more fun.. might get a load more pictures too instead of circling around the same crater for all these years hoping we wont notice

I think they will try to take it out again in September, based on the tests they have been doing on Earth.

Originally posted by ArMaP Spirit has been stuck in a "pool" of dust since May, unable to move.

As to the dragging wheel... at least its digging up salt and sulfur samples. Good bet that was an anicient sea bed, like the salt flats out here in Nevada 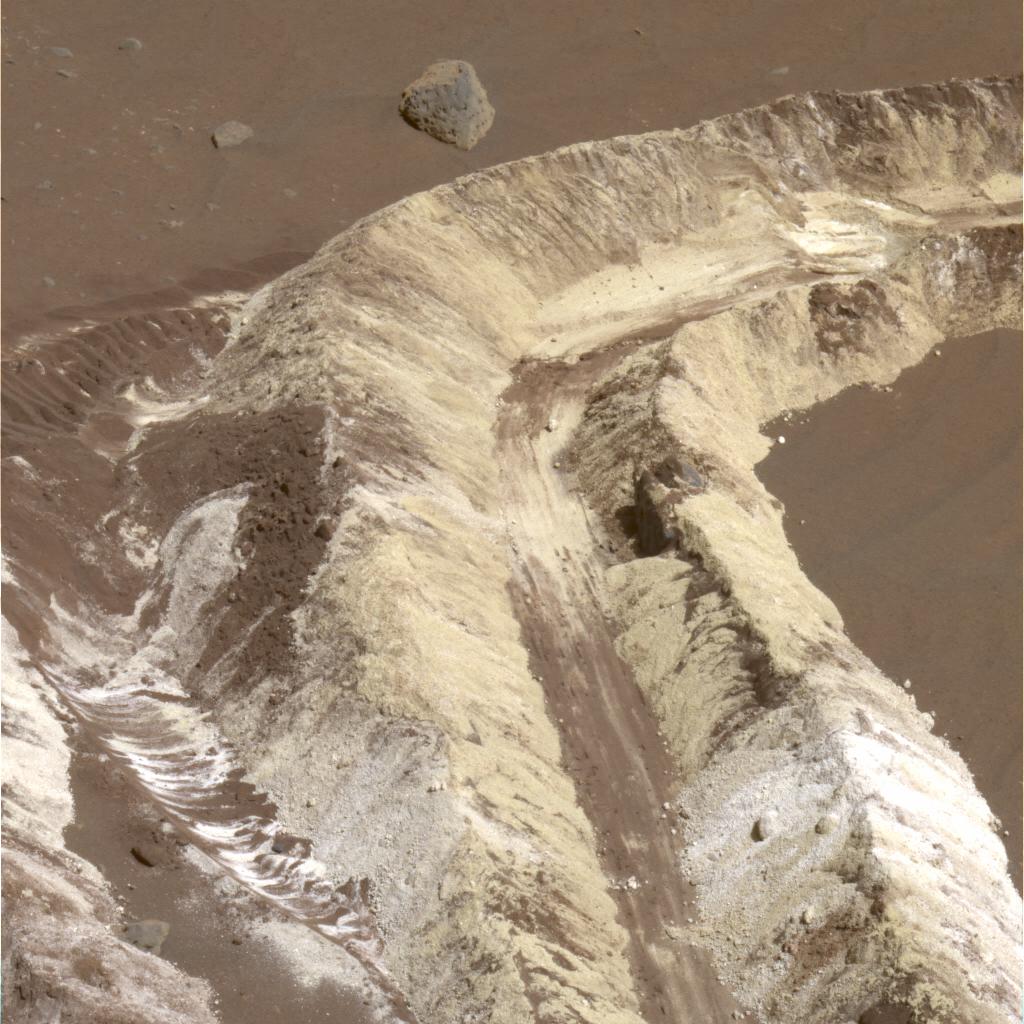 
Not exactly a very pleasant picture you posted. I suppose a large enough sign (for on a door) with that picture on there with the comment: DO NOT ENTER

Reminds me a proctologists test for a medical diagnosis.

As for these rovers, what are the plans for the next generation(s) Love to hear about those and how soon. I'm actually looking forward to some type of flying probes.

Is bigger actually better? I think they should have sent some type of base module with smaller ones inside.

It would seem that the projected costs of these explorations is WAY higher than it should be when it comes to space explorations and our future. How sad of a commentary on our species when we use 'cost prohibitive' factors to determine our very futures.

It's all about the cha-ching. Sounds ferengi to me.

I sure hope they don't make the same mistakes they did with the others with locked up wheels. One of the pictures from one recent lander showed what appeared to be some type of corrosion or growth?

Imagine an even bigger rover with a locked up wheel and all that weight.

The problem(s) with the wheels appeared long after the primary mission had been ended, the two (more or less) active rovers in Mars at the moment (as far as I know ) have been working much better than they were expecting, and while that is obviously good, it's bad for the next, because if it will only works for the intended time it will look bad when compared with Spirit and Opportunity.

And there isn't any corrosion or growth in any rover wheel, as far as I know.


It was in a Phoenix thread here somehwere. I could understand some type of contamination and growth as was suggested in the one thread. But without analyzing it, we can only speculate...right? I think the odds are high something like that can happen. Especially, in certain areas where there's more moisture and the apparent evaporation?

One site mention contamination from a lander. But I think there would have been that happening naturally in some form over thousands of years by metorites etc.

The top soil on Mars has apparently been sterilized for thousands of years. I would imagine they'll have to go deaper and or find the right location. But wouldn't a sterilzed planet show signs of past life?

If Mars has also had pole shifts, these past life hotspots could be anywhere......right?

I'm sure that's covered in a different thread anyway.

I would think the mechanics or basics for a new life form would be there and the landers themselves as if a power source to feed off of.( if that makes any sense)

posted on Aug, 23 2009 @ 12:21 PM
link
I have seen this in another forum and I thought it was a good idea, so I made an animation myself, showing a sunset seen by Spirit.

The time is much accelerated (roughly a 77 seconds difference between images was turned into just 1 second), but it shows how dusty the atmosphere is, the sun disappears while relatively high over the horizon.

Too bad it's not a colour version.

OK, Phoenix, you did wrote "lander", I thought rover, sorry.

Yes, I remember that, I think the scientists think it's ice, resulting from the condensation and freezing of some water vapour on the metal of the lander.


Are there any videos or stills of the stars at night on Mars? This one appeared to show a couple. Mapping the stars and planets from Mars would be really intersting.