Chemicals are the visible traces in the sky from military aircraft or other aerial vehicle spraying vast amounts of iron, alluminum, barium and radium over the world.

Reports of chemtrails are that the unified government systems of numerous countries are spraying minerals and chemicals in harmful amounts overtop populated areas, sometimes having fallout. Many reports have shown people have been suddenly stricken with serious influenza-like illnesses, and even killed, cloud cover has almost doubled since the beggining of the spraying, illness has sky rocketed, and there have been more illnesses because of the spraying. The chemtrails are sprayed in X's, swirls, straight lines, grids and small sections at a time.

Usually, the aircraft are


Usually commercial and civilian aircraft are displayed on the program Flight Explorer, which tracks these aircraft with a five minute delay in time. However, it is interesting to note that most of the aircraft noted to spray chemtrails do not show up, meaning they are either military or of a secret program from some other organization without flight plans.

The aircraft spray all around the world.

Unusual accounts appear every once in a while of unidentified flying objects (UFOs) spraying chemtrails. These UFOs are usually cube or sphere shaped, and are about the size of a F-22 Raptor.

Many photos also appear to show sphere-shaped objects in and around the chemtrails.

Normal fallout of chemtrails are

Chemtrails can be transmuted and made to completely disappear by the use of orgonite, a simple substance whose operation is understood through the Orgone energy model of Wilhelm Reich. The orgonite chembuster design will literally punch blue holes through chemtrails and their resultant chemclouds, and can be constructed from common materials for about US$150.

Contrails are condensation trails formed behind jet airplanes when they burn fuel in the upper troposphere at over 30, 000feet Temperatures are commonly below freezing at this altitude and so any condensation is frozen and becomes ice crystals. When burned, fuel containing hydrogen is combined with oxygen in the air to form water vapor, among other products such as pollutants. The amount of water vapor already present at that altitude also affects how long the contrail will remain visible. If the ambient air is dry, contrails will evaporate almost immediately. When a lot of water vapor is present contrails can stay for much longer with greater definition to observers.

People that dispute the existence of chemtrails have several problems with the idea. First is the conspiracy that believes a united collection of Governments are willfully, systematically and covertly poisoning the population. They insist the claims lack evidence. Increases in contrails are further explained by the steady increase in the number of runways, airplanes and flights. Global warming has created meteorological conditions that also may affect the behavior of contrails and cloud formation.

There are practical issues also. Would it be practical to spray poison into the atmosphere at over 25, 000 feet? The accuracy of affecting the target population would be decreased at that distance .The chemtrail would be subject to cross winds and breezes that could carry the chemical cloud hundreds of miles from target. Friends and families would be at risk of poisoning also.

Allegations that the Governments are supporting the pharmacorps by causing sickness in the population are not borne out by statistical evidence. A more accurate approach for ensuring blanket coverage of chemicals to a population would be to poison the water supply. This would allow the powers behind the conspiracy to protect their families, friends, employees etc by instructing them not to drink tap water.

The Chemtrail Myth
Chemtrail upscale??? 3700 flights cancelled for "inspection issues"??
Chemtrails
Chemtrails,and other disinformation.
Chem Trails in your neck of the woods?
A Hurricane like storm just formed in the center of the US.
Chemtrails at night
Chemtrails over the UK today
Outbreak of black, tar-like sweat in southern Texas?
I've Worked Inside the "System" for over 15 Years...Ask Me Anything
Proof of chemtrails?
[purl=http://www.skepdic.com/chemtrails.html]Alternative perspective[/url]
NASA image of Georgia beneath heavy contrails
New Mexicans for Science and Reason- Chemtrails

posted on Feb, 25 2010 @ 10:53 AM
link
There are no such things as chemtrails!
Its only normal contrails from airplanes!
Dont listen to lies.

All evidence that is needed to proof this is here.
en.wikipedia.org...


O.k. but how do you explain th weird clouds that appear shortly after spraying? no NORMAL contrail can create clouds like these..
www.exoticwarfare.com...
www.orbwar.com...
02.jpgwww.desertrange.com...

Besides,why WOULDNT the gov. want to make us sick? They make money off of sick people...not healthy ones.

x1111x33x
There are no such things as chemtrails!
Its only normal contrails from airplanes!
Dont listen to lies.

All evidence that is needed to proof this is here.
en.wikipedia.org...

How is it that this photo showing 2 jets flying at almost identical altitudes have 2 very different exhaust plumes? The one on the left is what I'd call a chemtrail, while the 1 on the right I'd call a contrail.
oi41.tinypic.com...


How is it that you are able to determine that?

Hello,
I took the photos and also looked at the planes with 10x26 binoculars and they both appeared similiar in size and shape. So I made the calculation that they were at very similiar altitudes. I also have photo showing that the plane with what I think is a chemtrail, turning on and off the spray.

It's pretty much impossible to judge the altitude of jets that are 5 to 6 miles above you. How do you know the planes were the same size? If a larger plane were higher than a smaller plane, it could look the same size. Right?

But "nearly" the same altitude can be enough of a difference to change the characteristics of the contrails. The behavior of contrails is mostly determined by relative humidity. This can vary with small differences in altitude.

posted on Oct, 8 2013 @ 03:27 PM
link
I'll agree with you on that, but I've witnessed these planes turning on/off the spray as they were approaching or leaving existing cloud formations. You must be aware of weather modification I'm sure.

Quite aware. It is not "chemtrails".
This is weather modification:

posted on Oct, 8 2013 @ 03:47 PM
link
At 50 seconds in to that video the news reporter states, "this is Greg's job, firing chemicals into the clouds..." If Greg is doing it with a Cessna, you can safely assume that others are doing it on a much larger scale. It may not be for the same reason though (to end drought). It could be to cause a drought.

Firing chemicals into clouds brings chemtrails into reality in my opinion. I have some patent information about it if you're interested in looking at it.

How is it that this photo showing 2 jets flying at almost identical altitudes have 2 very different exhaust plumes? The one on the left is what I'd call a chemtrail, while the 1 on the right I'd call a contrail.

Could be two different planes with different engines.... 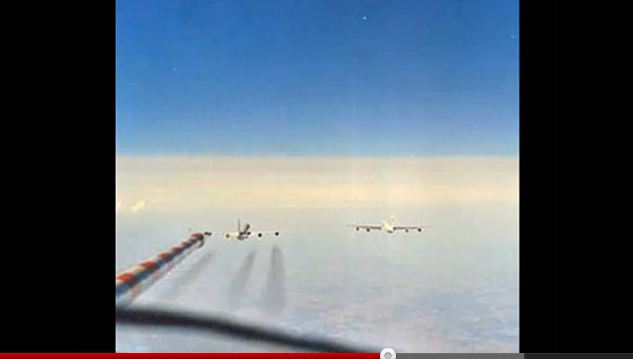 If Greg is doing it with a Cessna, you can safely assume that others are doing it on a much larger scale.

Why?
But cloud seeding is not done to end drought. It is ineffective in drought conditions.


It could be to cause a drought.

I have some patent information about it if you're interested in looking at it.

Seen it. There are a lot of patents for things that have never been built or done.


In the video it says that they re releasing chemicals into the air. This isn't chemtrailing?

No.
"Chemtrails" are the trails left by high altitude aircraft. That is, they were until the "chemtrail" crowd failed to come up with any evidence that "chemtrails" are anything other than contrails.

So, your car is producing "chemtrails"!

Ok, thanks for clarifying.

Sure. Want to take anything else I said out of context?
Feel free if it's the only way you can make your point. The "chemtrail" crowd tends to resort to that a lot.
edit on 10/8/2013 by Phage because: (no reason given)

posted on Oct, 8 2013 @ 04:58 PM
link
I didn't mean to imply that chemtrails are solely for the purpose of causing or denying rain. For those who may not have seen the "aerial delivery system" patent info here is the link. Of particular importance, I believe, under the Claim section #2."The system of claim 1 wherein the material tanks are configured to contain material selected from the group consisting of at least a water, gel, decontamination compound, weather modification compound, oil spill treatment compound, and a firefighting compound."
www.patentgenius.com...

A weather modification compound? What might that compound be composed of? Perhaps aluminum, barium, or strontium?

Why would this be taking place? It could be the global warming crowd, convinced that the world is melting, they endeavor to cool the earth by reflecting the sunshine back out to space. Regardless of any other negative effects to life on the planet.

Maybe it's a way of killing 2 birds with one stone. Cool the earth while at the same time causing crop failures, food shortages, and ultimately famine.

Also the United Nations 31/72. Convention on the Prohibition of Military or Any Other Hostile Use of Environmental Modification Techniques.

1. Each State Party to this Convention undertakes not to engage in military or any other hostile use of environmental modification techniques having widespread, long-lasting or severe effects as the means of destruction, damage or injury to any other State Party.

2. Each State Party to this Convention undertakes not to assist, encourage or induce any State, group of States or international organization to engage in activities contrary to the provisions of paragraph 1 of this article.

As used in article I, the term "environmental modification techniques" refers to any technique for changing-through the deliberate manipulation of natural processes-the dynamics, composition or structure of the Earth, including its biota, lithosphere, hydrosphere and atmosphere, or of outer space.

I don't think the United Nations would adopt a Resolution forbidding the use of weather warfare if it was not already possible.


O.k. but how do you explain th weird clouds that appear shortly after spraying? no NORMAL contrail can create clouds like these..
www.exoticwarfare.com...
www.orbwar.com...
02.jpgwww.desertrange.com...

Besides,why WOULDNT the gov. want to make us sick? They make money off of sick people...not healthy ones.


Contrails (/ˈkɒntreɪlz/; short for "condensation trails") or vapor trails are long thin artificial (man-made) clouds that sometimes form behind aircraft. Their formation is most often triggered by the water vapor in the exhaust of aircraft engines, but can also be triggered by the changes in air pressure in wingtip vortices or in the air over the entire wing surface.[1] Like all clouds, contrails are made of water, in the form of a suspension of billions of liquid droplets or ice crystals.


Clouds are made of tiny drops of water or ice crystals that settle on dust particles in the atmosphere. The droplets are so small - a diameter of about a hundredth of a millimetre - that each cubic metre of air will contain 100 million droplets.

posted on Oct, 8 2013 @ 05:26 PM
link
More circumstantial evidence of nefarious purposes of chemtrails can be found by looking at the assignee listed on this U.S. patent. www.patentgenius.com...

"Evergreen is part of the US Civil Reserve Air Fleet and the International Peace Operations Association. It has been known to do work for the United States government, including fire suppression for the U.S. Forest Service, troop transportation in the Gulf War of 1991, as well as helicopter transportation for oil rig firefighters at the end of hostilities. The company has done some work for the Central Intelligence Agency as well, including transporting the Shah of Iran from Panama to the United States in 1980.[3]"
en.wikipedia.org...