posted on May, 31 2009 @ 11:59 PM
link
reply to post by jkrog08
Great work again. I'm beginning to think your threads should begin with the lights dimming and red velvet curtains opening...ta dah!! Epic and full of detail.

This incident is one that, to me, represents the difficulty of trying to understand the UFO phenomena. The early 20th Century featured a few sightings of the silver fuselage style of UFO. Mid-20th and onwards we see discs and from the late 1970s we have the boomerangs/ triangles.

The silver fuselage type (with bright port holes) reflected the tech of the time and sci-fi imagery. Nevertheless, it seems certain that the incident occurred and the UFO fitted the description. It's difficult to be clear here...it makes me wonder if some UFOs are reflective of our technology? The parallels are there, but who can say if they mean anything? Think of the vast black triangles (600m wing span according to witnesses) and then think of our smaller black stealth planes. Silver 1940s airplanes and silver wingless fuselages...

The whole subject is full of mischief and paradox. Bloody infuriating


Thanks, I too have pondered that question about why the change in shape and design. I think a lot of UFO sightings today are really secret government craft. But then again we still have the saucer and cigar shaped craft reports also. I don't know, now that you brought it up I am going to have to research it and see the statistics on type of UFO seen over the years. Maybe there is more types of ETs visiting us now then before? I think really it is likely a mix of reverse engineered human craft (majority of triangle sightings) and ET craft (all others). I'll have to get back to you on this one,lol. Thanks for bringing it up though!

posted on Jun, 1 2009 @ 06:02 AM
link
The ship seen seems to fit the design parameters of a type that uses a flame jet generator at the rear to ionize the airstream aft of the ship. This in turn created a net positive charge towards the front of the ship. The blue glow under the craft seems to support this, but I dunno why it would only be seen under the ship; not forward or aft

Maybe the field was biased towards the bottom (to provide lift?)


Thanks for your reply and words. I wanted to conclude the series of threads I have done on the main cases that broke the UFO phenomina wide open in the late 40's. It is a lot of research but I hope it is well worth it for everyone who doesn't know about these cases.

On to the excellent post, have you ever wondered why so many sigthnings right after world war 2 and why mostly in the US and latin america ? My hunch is that these are truly real alien craft and they are following their first contactees (german scientists, nazis and esoteric knowledgeable) as they fled Germany at the end of the war. The US officially had operation paperclip going and some of the worse nazi criminals most probably left for latin america, allegedly bringing high tech stuff with them (superior submarines loaded with cargo went missing). Its just a thought but the sightings might indicate that some of the material ended up in the hands of the US military complex which helped them build very sophisticated prototypes on secret installations and bases throughout the country. The latin america trail is probably war criminals that brought classified projects and documentation with them so they had some leverage if they ever needed to bargain with foreign nations i.e for their own security.

P.S. May i ask if you use some sort of knowledge management software, ive been searching the web for some time now but havent found exactly what i am looking for, it should be a mix of a mindmap, wiki and maybe also be able to search deep link material (you collect urls and the KMS gather information from the supplied links using keywords).

You have done a great job. I also agree that our newer military crafts could be mistaken for ufo's but even with knowing this I don't believe our crafts can accomplish the movements of which ufo's can do.

If our discussions of that warp engine are still fresh in your mind, I believe that's where you'll find your answer. This indeed is quite an ideal item for something like that engine system. The colors the ship were emitting are my personal interest. Allow me to explain:

This would also explain the general blue glowing of the ship itself, as it's a Doppler affect of the gravity wave. Light is coming out of the field more than going in (from windows or the fuel, whatever) Light is bouncing everywhere, but filling up more in the field then not. And if the front was black, it would simply be an affect of gravity being more destructive ahead, creating an odd affect. of being dragged ahead but that. Maybe, I don't know. Could just be light not existing there yet.

It also explains the intelligent and radical moves. it's simply at a higher speed of relativity of time.

I'll try to digest this some more later.


Fantastic information and Thanks for posting this. I admit...I have been quite a bit of a UFO skeptic even after being on ATS (only for 3 months now but it has been great) ...but threads like this have me so interested now I am hooked!

jkrog08, great OP and thread! Starred & Flagged...and to think that I got the hook with a simple jellyfish!


Cool, I am glad I can help you and others in understanding the very real UFO phenomina. This is one of the better cases IMO.

posted on Jun, 21 2009 @ 04:11 AM
link
I have to say, this is a damn good write up on the Chiles / Whitted incident. So much so that I took a goodly chunk of it and imported it in to my wiki. The only modifications I made were to make it a bit more neutral and to remove any extraneous POV in the spirit of making it encyclopedia friendly.

posted on Nov, 29 2016 @ 04:35 PM
link
Old thread obviously but just a few corrections. One, Robins AFB is spelled with one "r" obviously now and two, the base is located in the city of Warner Robins, GA, where I live, not Macon which is a neighboring city. Thanks

posted on Jul, 21 2020 @ 10:53 PM
link
This is the longest "necrobump" I've ever made of about 11 years, but some other research led me back to this event, so I'm placing my observations here for the record. I'm not sure if anybody will see this unless someone pulls up this old thread for research like I did.

originally posted by: Kandinsky
reply to post by jkrog08
The silver fuselage type (with bright port holes) reflected the tech of the time and sci-fi imagery.


That much is true.

Nevertheless, it seems certain that the incident occurred and the UFO fitted the description.

I know we are inclined to make judgements like that, and maybe in 2009 I would have been inclined to think a multiple witness sighting like this is confirmation, though even back then I would probably not have used the word "certain" in this context, because while I'm certain the incident occurred, I'm never certain that the UFO fits the description. Even in 2009 I had some inking of witness misperceptions, and during the last 11 years of researching UFOs, I have come to place less and less confidence on the accuracy of witness descriptions based on the evidence available that such descriptions are often unreliable in many respects.

In 2014, about 5 years after this 2009 discussion, Jim Oberg presented some information about a UFO sighting over Kiev in 1963. On page 3 of his paper, he says "May constitute a 'Rosetta Stone' for world Studies of human misperception" and indeed it may hold clues for this case in particular. Now, what may have seemed unthinkable in 2009, seems likely, that Hynek's "unlikely" suggestion for an explanation may have actually been correct.

Look at the two drawings in the middle of that 1963 UFO over Kiev, with the two rows of windows and long fiery exhaust! 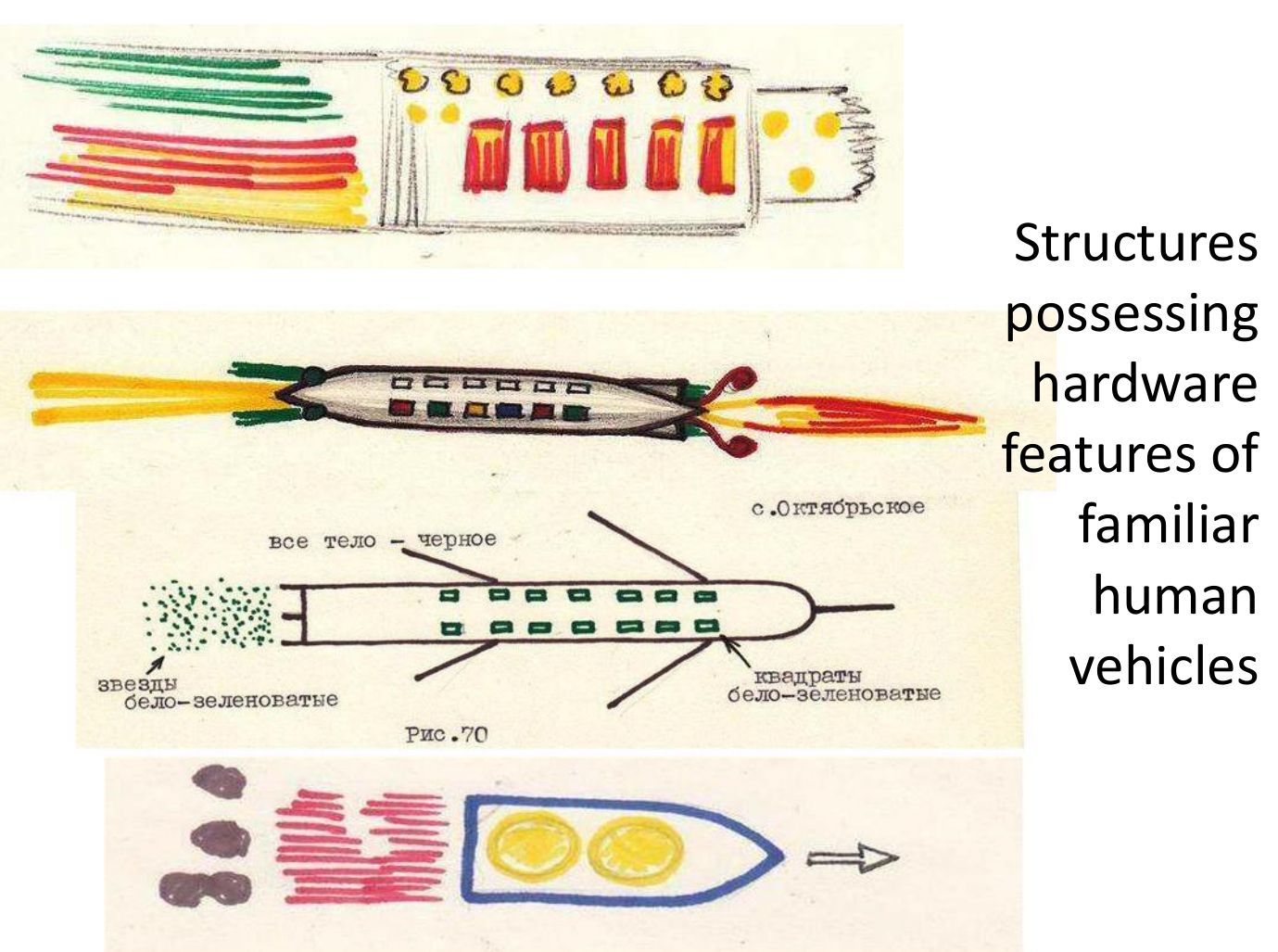 Did they see the same space ship? No! It was something burning up in Earth's atmosphere. So now we know that people can perceive things breaking up and burning up in Earth's atmosphere as structured spacecraft, and not just one witness, multiple witnesses. Many things seem to fit, like the long fiery exhaust. Compare that to First Officer Whitted's sketch of two rows of windows from the OP:

About the "pulling up" maneuver that Capt. Chiles mentioned: "After it passed it pulled up into some broken couds and was lost from view. There was no prop wash ot rough air felt as it passed."

One thing we know about bolide sightings (and also man-made objects burning up as they enter the atmosphere) is that almost all observers commonly are way off on estimating the distances to such objects, with the usual error being to assume the object is much closer than it really is. Given that knowledge, it seems quite possible that it was never as low and as close as the pilots thought. They would be very unusual observers indeed if they estimated the altitude and distance correctly when almost nobody else ever does. So this also casts serious doubt on the "pulling up" when in fact they may have just got a more accurate impression after it passed that it was really further away than they thought. I would also note that in every cockpit I've seen, pilots cannot see objects that have "passed" them in the manner these pilots described, that is, an object on a near collision course that was flying in the opposite direction. After it passed, it would be behind them, so it doesn't make any sense for them to be describing the maneuvers of an object that passed them which they can no longer see.

So in summary, in 2009 I probably would have thought Hynek's meteor explanation was very unlikely. After looking at the 2014 report on the 1963 Kiev UFO, as well as what happened with the 1996 Yukon UFO where witnesses also saw a structured craft where there was none, I no longer think Hynek's explanation is unlikely, in fact, I now think it is quite likely. I know there are those who refuse to believe that human perception can work this way, but see the evidence that it can work this way, with multiple witnesses seeing "familiar-looking" structured craft when the looked at a fireball swarm, bringing us back this this statement of "The silver fuselage type (with bright port holes) reflected the tech of the time..." which is what the human mind can imprint on observations that confuse us like a fireball swarm.

edit on 2020721 by Arbitrageur because: clarification