Bacteria Could Live on Mars

Building on a tradition of ground based simulation that extends back to 1958, a new series of experiments, conducted by an interdisciplinary research team from the Faculty of Natural Sciences of the University of Aarhus, Denmark, suggests that indeed bacteria could survive beneath the martian soil.

Im glad Im not the only one who thinks so.
There is so many places on mars were life could be hiding away! posted on Dec, 9 2008 @ 01:15 AM
link
Its possible with the recent findings by the probe Phoenix. Samples of the water ice have been seen to go from being ice, to melting then evaporating.

The Odyssey IR images have confirmed some internal heat going on up there. That means that there could be some pockets of life.

When the rovers move around, their tracks left by the wheels seem to appear to be like how tracks would look if the surface was mud or moist. Again pointing to the possibility of life in various areas inlcuding on or just underneath the surface.

Im glad Im not the only one who thinks so.

Really? You were the ONLY one?

What must I have been thinking all this time?

Seriously though, It appears the only people who have historically had a problem with this concept is NASA and it's affiliated scientific hitmen. There's a strong possibility that microbial life still exists whether it be under the ground, in caves, aquifers.. under rocks or in large crevices.. no one really knows for sure, at least not here at this forum but it's impossible to rule it out.

The discovery of more and more extremophiles suggests that life finds a way. So long as the microbes aren't in direct contact with the cosmic rays and solar radiation, there's a chance for life.

posted on Dec, 9 2008 @ 01:27 AM
link
It is possible that the life there could have adapted to any radiations getting through the thin atmosphere, in effect developing a sort of imunity to it.


We do know that life can adapt to many environmental conditions based on what has been discovered here on Earth. There isnt any reason why life on Mars would not have this ability as well.

Any life up there would have evolved and thrived for the conditions there.


It's possible but not likely. Radiation tends to be a universal killer. If the microbe contains water, which all life does to exist, then it can be affected adversely such as mutations at the cellular level for instance. This would not bode well for a life form with such few cells and hence, continuation of the species.

Stop trying to push the envelope and lets just concentrate on whats probable at this stage instead of trying to muddy the waters with incredulous statements that cannot be proven. Lets take it a step at a time RFBurns.

posted on Dec, 9 2008 @ 01:37 AM
link
Mars would be paradise for bacteria. Lots of places to hide.
I hope there is more then bacteria up there but bacteria is a good start.

Originally posted by SuperSlovak
Mars would be paradise for bacteria. Lots of places to hide.
I hope there is more then bacteria up there but bacteria is a good start.

Yup agreed! All you need is one bacteria to be found on Mars and it will totally redefine the Drake Equation, which in essence opens up a whole new can of worms in regards to the viability of life throughout the Solar System, Galaxy and ultimately the Universe. It would certainly give more weight to the Panspermia theory too.

What interests me about Panspermia is that if it eventually proves to be true/viable, where did all the dormant 'bacteria'/microbes originally come from? An ancient planet for instance?


I love your siggy by the way SuperSlovak. Dark Helmet has to be one of my all time favorite villains! The mere sight of him cracks me up!

The atmosphere is thin on Mars, but considering the level of radiations given the distance from the Sun, and even cosmic radiations would not be at such a level that would not allow for mutations and adaptations for life over a time span.

If the radiations were that significant, wouldnt NASA build them rovers so that there wouldnt be exposed wireing?

Some wire on top of the Phoenix probe.

Now if there were considerable radiation concerns, then why does the major manufacturer of the wire assemblies for these probes do not use materials that also provide insulation for radiations? According to this manufacturer, the insulation is to allow for the wire to sustain the temperature extremes. No where does it mention anything about the insualtion also designed to block out radiations.

So if there is that much radiation that would prevent life from doing its thing up there, that radiation would affect the operation of these rovers considerably. Things like data aquisition, control, image aquisition, motion, command functions etc.

A study on how life on Mars could adapt to radiations.

Life with Radiation on Mars


More studies on how microbial life can adapt to radiations

posted on Dec, 9 2008 @ 01:57 AM
link
I feel that bacteria and virus should be seeded on Mars. What will come out of multiple evolution cycles is uncertain. May be new unimagined life forms may come to evolve there. I agree that Panspermia theory sounds good and that we have also been seeded here on earth.


Earthly microbes may survive on Mars according to NASA.


Another NASA study on the infamous Deinococcus Radiodurans


Resistance does not equal immunity. Take us for instance, we have a small resistance to UV but give us too much and it's lethal.

From Your Link: X-Treme Microbial Adaptations


Tullis Onstott of Princeton University, Lisa Pratt of Indiana University and colleagues think the microbes may have first trickled down there between three and 25 million years ago. The microbes were forced to survive on the leftovers that result when radioactivity from uranium, thorium and potassium in the native rock breaks down molecules of water, prompting a sequence of chemical reactions that produce hydrogen peroxide, break down pyrite, and form sulfates.
Source

What they are saying is that Microbes live off the byproducts (sulphates). They don't actually live around the Uranium, Thorium etc.

You are also confusing cosmic radiation with solar. It doesn't matter where you are in the solar system, the cosmic rays have the same frequency and potency. Cosmic rays DO NOT come from the sun... hence the term 'cosmic'.
A thinner atmosphere such as Mars' will only let more in making it more dangerous than it is here on Earth.

posted on Dec, 9 2008 @ 02:17 AM
link
Ok so if there is sufficient evidence through these studies that some microbes left on the rovers and crashed probes could survive in Mars, does that rule out that any already existing microbes up there could not have adapted to the environment on Mars already?


I think that they could, and have. I am hoping that when MSL is there with its new instruments to truely look for these microbial little buggers, that we get alot more verification on life in them there Martian deserts.

Perhaps the MAHLI camera will zoom in on some of them and we get some very clean, crisp imagry of the natives there.


Indeed, the radiation on the surface would be less from the Sun at that distance. The cosmic radiations certianly do not equate to the levels of which they bombarded these microbes that are 3,000 times the level that would wipe you and me out for sure.

But were not talking about our life structure, were talking about microbes that seem to have this icredible adaptability and survivability to all kinds of high level stuff, radiations, acids, temperatures, the works.

We just dont know for sure to rule out any possible scenario for exsisting microbial life up there. If evolution is to be followed in this example, then the life would have adapted to this cosmic radiation levels.

But then of course, that radiation is on the surface, not below the surface, say a few inches or so, or in some cavern, or within the frozen permafrost.

Either way, it would not surprise me one bit that we find microbes or worm like life that has adapted to those environmental conditions.

Originally posted by RFBurns
Earthly microbes may survive on Mars according to NASA.

I don't think the Martians are to happy about that 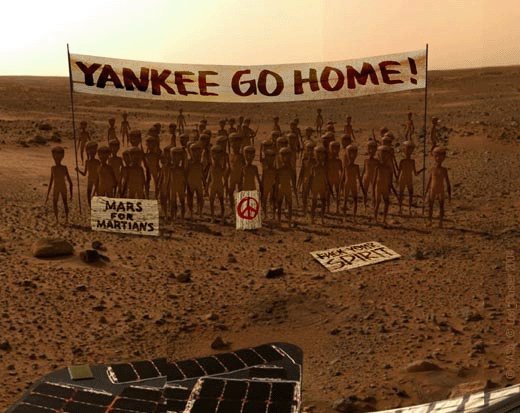 They say this Martian Meteorite was found in Antarctica...

Can someone explain to me how this Martian Meteorite got orbital velocity from the surface of Mars (it would have had to been HUGE to survive the descent to Earth and still leave a chunk as large as it did) then achieve escape velocity from Mar's gravity, aim itself at Earth... land in the Antarctic where we could find it... just lying around on the ice

Does anyone else see anything wrong with this picture?

posted on Dec, 9 2008 @ 03:32 AM
link
If the meteorite crashed onto earth! There could of been a reaction within the atmosphere or as it crashed.

Did you hear about how we came around?

We are all here by accident!

posted on Dec, 9 2008 @ 03:34 AM
link
As far as the velocity, could have been from a large meteor impact on Mars and with the low gravity, thrown out into space, eventually to make its way here to Earth.

From what I remember reading about that rock, elements were found that matched up to data taken from the Viking probes which would suggest the rock was from Mars.

Often meteor debris is found even after burning up in the atmosphere. Thus remains left on the bits and pieces found.

Isnt it curious that a uniform mission patch in prestine condition was found by a FOX news crew from one of the astronauts after the Columbia burned up too?


I guess it would depend on the size of the cataclysm. If it was a massive collision for instance that flipped Mars onto it's side instead of a pole shift, it could have spewed enough matter out into space, some of which eventually hit Earth. I'm not saying that's what happened but there is the possibility.

Haven't seen you in a while Zorgon.. Good to see you're in fine form!


Hmm but NASA seems to have been very open to the possibility of bacterial life. Afterall, when the meteorite ALH840001 crashed to Earth NASA had no problem proclaiming that the remains of bacterial life forms may have been in the meteor, even making the cover of time magazine, and astronomy publications and news across the world.