posted on Oct, 22 2008 @ 11:14 PM
link
In exclusive, never-before-seen footage, former CIA operative E. Howard Hunt discusses his knowledge of and participation in the plot to kill Kennedy in a video testimony he gave shortly before his death. Alex Jones’ upcoming film will fully analyze the CIA-shadow government coup that occurred inside the United States 45 years ago.

Rolling Stone and a few other publications have covered Hunt’s audio confession (released in April 2007), but no one has yet seen the information the infamous White House ‘plumber’ left behind to shed light on the figures involved in the plot. Here, Howard Hunt discusses LBJ, who saw Kennedy as an ‘obstacle’ to the presidency. According to Hunt, LBJ consorted with top CIA officials Cord Meyer and William K. Harvey to carry out the plot.

You've become one of my favorite posters the last week. I'm going to go over the story and videos now. Thanks a million for the post!

By the way, that's Jim Marrs on the left in the hat, in the first video I'm now watching.

I've explained some of this in my following post ...
JUST FINISHED watching the first video and its 100% wrong ... it wasn't Johnson, Johnson was put into position by Brown & Root and Brown Brothers-Harriman (the Bush/Thyssen/Nazi/neo-Nazi/Rockefellor syndicate) -- that was the WO then the NWO and now is the CNWO.

IT WAS THE BROWN BROS-HARRIMAN group that killed Kennedy, they are co-owners of the Fed and City of London and brought us WWI, WWII, Vietnam (Johnson was their 'front') and WTC/911 and Iran/Iran wars and coups for the last 60 SIXTY years.

Why should anyone give any creedence to the words of the man on the grassy gnoll who shot JFK?

If he was a part of the conspiracy, who's to say he isn't trying to protect someone? Hunt probably didn't know the real reasons for JFK's assassination.

Correct me if I'm wrong, but is Hunt saying that LBJ was the mastermind behind the assassination? I don't doubt he was involved, but there are much higher powers responsible.


It wasn't a shot from the grassy knoll that got him ... it apparently was a shot from the storm drain about 15 feet away ... its discussed somewhere in Jim Marr's forum in one of the threads. I'm going back to watching the videos in the Opening Post. Bye for now.

By the way -- Oswald and Barry Seal and David Ferrie were both in the same Civil Air Patrol group in Florida. Barry Seal was the biggest CIA narco dealer in the U.S., until Ollie North allegedly had Seal killed and Ollie start trading heroin and weapons with Monsour Al Kassar, co-owner w/the Syrian King of the opium fields in Syria.

AND Mohammad Atta was 'training' in a neighboring small airport in Florida THAT WAS BUSTED for heroin trafficking.

Making Southern Florida a CIA/Heroin trafficking mecca AND one of the planes used for trafficking heroin recently crashed with a Voting Machine Company owner, onboard.

What this means, is: both JFK and WTC/911 were involved with heroin traffiking on a geo-scale SINCE the income from drug trafficking is supposed to be the same as the income from legitimate geo-business ... about 50 trillion dollars a year, each. And all the money is laundered in City of London/Fed/Bundesbank banks that are privately owned ...

AND GUESS WHO THE BANKERS ARE THAT ARE CURRENTLY doing the geo-financial destabilization ... the same ones that were behind JFK and WTC/911.

When Johnson got in, the Browns & friends got 90% of all the military-industrial contracts for 30 years ... JUST like Halliburton (again, owned by the same interlocking Fed/City of London bankers) to today.

The same interlocking central bank directorate are directly connected to the following:

They were part of the Fabian society of the City of London that financed the Bolshevik Communist Revolution and Nazi Germany along with Rockefeller/Harriman whom the Bush dynastic were/are nazis and neo-nazis were:

They created the Iraq, Afghanistan and to be Iran messes to protect Kissinger/Cheney/City of London oil pipelines ... the same folks that killed Kennedy and did WTC/911 ... over their pipelines and prospective pipelines

and the same dynastic killer banking family dynasties in City of London/Fed currently fight these conflicts in the world, many that were going on BEFORE Kennedy and still rage today

the same banking families that killed kennedy, including their German branches, are the leading heroin traffikers since WWII, Kennedy, and WTC, such as the von Schroeders and Schacts and Thiessens

Barry Seal and the Hunt milieu of CIA spooks and assassins work for the City of London and Fed and Bundesbank, I believe Stugis and Hunt are in this picture with Seal, they're all narco-terrorists AND NOTE THE OSWALD LOOK-ALIKE in the lower front right.

the Vatican bankers were also involved

and so are the Knights of Malta, and the popes

here is the interlocking family dynasty banking directorate of the City of London, the folks AT THE top were most directly involved with killing JFK, note Brown ... and note the banks responsible for todays current financial crises, the same families that killed kennedy also orcestrated the Great Depression and both World Wars

and this is the City of London/Rockefeller family dynasty group MOST DIRECTLY RESPONSIBLE for killing Kennedy that own the banks that own the oil companies that VIRTUALLY ALL OF THE WARS AND CONFLICTS before, during and after Kennedy's time were orchestrated for: Kennedy reactivated the U.S. Treasury to print silver-backed publicly owned money, the fed that issues their own private money, killed him. 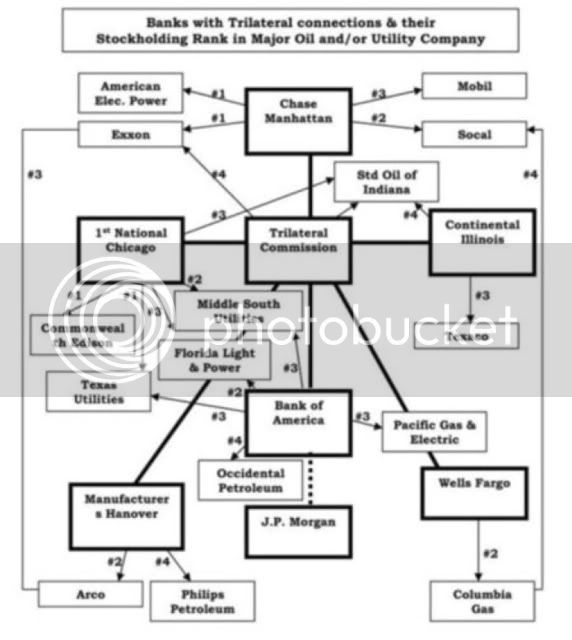 Originally posted by freakyty
Correct me if I'm wrong, but is Hunt saying that LBJ was the mastermind behind the assassination? I don't doubt he was involved, but there are much higher powers responsible.

Right on! Johnson was a mask for the Browns & Harrimans & Rockefellor & Thyseen & Bush & Schroder & Warburg City of London financial dynasties who put him into office and who brought us corrupt communism, corrupt socialism and corrupt capitalism. It was Brown Brothers-Harriman, and their cohorts own privately own the Fed/City of London. The Browns worked through Hoover and corrupted got big dam building projects AND Johnson was about to be indicted for fraud the day Kennedy was shot. Johnson took bribes up the kazoo. Don't mess with Texas. Or Florida (the corrupt nazi Bush states)

I agree that this revelation by Hunt is not the whole story. It is interesting to hear him say some of this stuff though.

Wasn't an old mistress of JFK's found dead in a park a few years ago of a drug overdose (or was she shot)? I remember at the time that her death seemed highly suspicious. I was wondering if the dead woman was Cord Meyer's wife. Does anybody remember what I am talking about?


You have certainly done your research. I just have one question: Where do the Jesuits fit into all of this? Wasn't it the BLACK POPE at the time who ultimately made the decision to kill Kennedy?

Originally posted by freakyty
reply to post by counterterrorist


You have certainly done your research. I just have one question: Where do the Jesuits fit into all of this? Wasn't it the BLACK POPE at the time who ultimately made the decision to kill Kennedy?


I've researched the Black Pope until I'm blue in the face. but haven't given up yet. There seems to be only one source of all that Black Pope stuff, and he's not objective and too emotional and "wanting to get even" and his credibility suffers as a result. I think that at the level at which you and I are at, the "Black Pope" is a 'process', not an individual ... by that I mean a 'collective' individual. For example, if you put a Rockefellor, a Harriman, a Rothschild, a Thyssen, and a Shroder, and a Pope-of-the-day ... and, the fascist Black Pope (I saw his name a couple months ago but now have to revisit it) all in the same room THEN you'd have a real Black Pope. In other words, I don't know the answer to your question.

suffice it to say the founder of the Illuminati was the Jesuit, Weisenhaupt.

Therefore, perhaps the Black Pope aka the Jesuit General ALSO heads the Illuminati.

What do you think about that premise? (Or, is that what you were trying to tell me.)

(I've got to sign off, I've been at this 15 hours today.) Will check back tomorrow for your reply.

Cord Meyer left the CIA in 1977. In his autobiography Facing Reality: From World Federalism to the CIA he wrote, "I was satisfied by the conclusions of the police investigation that Mary had been the victim of a sexually motivated assault by a single individual and that she had been killed in her struggle to escape." However his former personal assistant Carol Delaney later claimed, "Mr. Meyer didn't for a minute think that Ray Crump had murdered his wife or that it had been an attempted rape. But, being an Agency man, he couldn't very well accuse the CIA of the crime, although the murder had all the markings of an in-house rubout."

In February 2001 writer C. David Heymann asked Cord Meyer about Mary Pinchot Meyer's murder and he replied, "My father died of a heart attack the same year Mary was killed. It was a bad time." When asked who had murdered Mary Pinchot Meyer the retired CIA official, six weeks before his own death from lymphoma, reportedly "hissed" back, "The same sons of bitches that killed John F. Kennedy."[2]

Makes one wonder if Hunt was telling the truth about Cord Meyer, or whether Hunt was trying to help other old friends by putting out a fire.


I don't know anything about this, you might ask Jim Marrs in the ATS Jim Marrs forum.