posted on Aug, 31 2008 @ 07:42 AM
link
For those who are unaware of the term "clout", here in the UK it has a couple of meanings, one of them being, how much influence do you have in certain situations.

Example: I want to go have a look around a place, say somewhere like the Gilliland ranch. I do not know too much about the workings of the place, but i'm guessing you pay your fee and go on up to look at the skies?

So thats what i get, the basics, or maybe not even allowed in at all in some places.

However, someone like Springer, along with Johnny and Crakeur go up there, and are maybe privvy to a bit more info and "one-to-one" time with the owner of the ranch. Reason being they are maybe more professional, hold a bit more status in that that own ATS and are businessmen.....you get my drift right?

Thats clout. Being able to get more than the average Joe because of who you are, what you do or what you have.

Anyway, back to my question. I am really directing this towards any of the 3 Amigo's.

Have you ever tried, or would you be willing to try, to get more info from certain establishments regarding the kind of subjects discussed on ATS? (The more secretive places more so).

I ask this because (and i know many will laugh at this, but hey, laughings good for the soul so fill ya boots ), i have just finished watching yet another Area 51 video where someone drives as far as they can, only to get turned away, scared by the cammo dudes or you get grainy footage from miles away!

I never thought i'd say this but i'm bored of them now. Bored of people making crap videos where they look like the nutjobs many of ATS are portrayed as by the media. Even a little bored of Area 51.

Now heres the laughable bit, and probably totaly unrealistic, but whilst watching the video i thought to myself, "Has anyone actualy asked for a tour of the place?" Written a professional, polite, unnacusing letter asking for info on the place. Speaking on the phone to someone higher up in the base to see if you could get a visit, a chat no matter how brief or what the content maybe......in order to feedback to the many people in the conspiracy world and put a few myths to rest.

Ok i realise that sounds silly, Area 51 won't just take you on a guided tour, but many highly private establishments do have a "public tour" type of thing. Maybe even another kind of tour for the more professional member of public?

Thats why i ask the question to people like the 3 Amigo's. ATS is pretty huge now and i wondered if the owners would be granted more access to places/info than us members.

Thanks for any replies. I am expecting a few laughs from this, but there are many places that people think are inaccessable but you can visit if you ask. You may not get to see everything of course, but how cool would it be if we had a report back from an ATS investigation team from INSIDE Area 51! Even if it they reported back info we pretty much knew, or were being fed already, and whether we believed it or not.

That would be a first on the net without a doubt.

Although I doubt 'secret installation' tours are available to ANY public website, I know the Pentagon has a 'media outreach' office. Through that, they (for example), work with movie studios to ensure that, in movies, US military activities are accurately portrayed. Oh, and positively portrayed as well.

I wonder, along with the OP, if ATS has ever tried to coordinate with them? Perhaps they would be more receptive than one would anticipate. After all, they have a vested interest in showing that 'secret' activities are for the public good... that would be a heck of an 'ATS Premium' video!

As an aside, I believe the term 'clout' has the same meaning in American as you describe.

Ah thats interesting, the other use for it is what my kids are going to get in a minute if they don't stop argueing over bugs in the garden!

Presidents routinely ask their opinions and I have it on good authority that all the Amigos have a "Hot Phone" direct line to the Pope for emergencies.

**I also believe that the last Illuminati meeting was held at Springers place** (We are not supposed to talk about that, I'm probably in trouble)

I doubt they can do anything really.

Originally posted by CX
Ah thats interesting, the other use for it is what my kids are going to get in a minute if they don't stop argueing over bugs in the garden!

Ah. In America, I believe that's called 'a skite across the lug'.

Originally posted by Hamlin
Owners of websites don't get VIP passes to Area 51.

I doubt they can do anything really.

Thanks for the reply, although i'd have to disagree with you there.

Some website owners maybe, but there are owners of very well run websites, very large websites.....and very importantly, very professional websites with the expertise that comes with that, that will get more invites or possiblilities than others.

Ok, like i said in my post, Area 51 is just an example, and maybe an unlikely one at that, but to say they can't do anything really is a bit ignorant if you ask me. (Don't mean ignorant in a nasty way, maybe it's my use of the word but you get what i mean? It almost sounds like you mean the 3 Amigos can't achieve much at all with what they have, but i'd say that just has to be wrong.)

I for one know that if i undertook some of the tasks, business meetings, major events that ATS has been to, i would not be as well received as the likes of the owners here. So they CAN do something that maybe i could'nt.

If i approached a celeb and just said, "Hi, my names **** and i'm into UFO's, come and endorse my website, i have a feeling i'd get more of a cold shoulder than if ATS management approached them.

At the end of the day, i was only asking out of curiosity and i respect your opinion.

While I agree Area 51 is a highly unlikely candidate (not necessarily impossible though), I do see what you mean and I can say that we have had an advantage or two along these lines already. Certainly not with any government but with the media.

I will think about this and make a phone call or two and see what, if anything, is out there that is worthy of our membership's interest and our time.

I know you guys are busy and would'nt have the time to investigate every request, but knowing that you'll even consider it is great.

Maybe the members here could throw a few suggestions/requests in the pot for future thought?

Like you say, maybe not anything to ambitious or unrealistic, but other interesting places worthy of an investigation, that maybe the average member would find hard to undertake.

posted on Aug, 31 2008 @ 12:49 PM
link
As we all know the amigos have carte blanche to enter and exit Area 51 and other secret facilities at will. SimonGray even has his own room at Buckingham Palace next to the Queen's Private Quarters.

It is even roumored that SkepticOverlord has complete and total run of the White House, and Springer has his own apartment at the Playboy Mansion.

Originally posted by CX
Maybe the members here could throw a few suggestions/requests in the pot for future thought?

A few years before they opened Camp Hero in Montauk to the public, I applied for and recieved a pass from the county to do historical research at the base. It was well I did, because we were stopped by the police when we were there and they wanted to see the pass. I know this isn't the same as getting a guided tour of a secret military base, but I thought I would throw it out there as food for thought. However I did not say that I was looking for evidence of reptoids and time travelers. I think I said I was doing it as a school project or something. But at any rate we had full run of the base for a day, without the worry of being arrested for tresspassing.

Originally posted by William One Sac
I did not say that I was looking for evidence of reptoids and time travelers.

Soooo did you find any?

Anyone who saw the Indiana Jones new movie... remember the scene with the town of plastic people? Well that is really there...

Take a walk through "Doom Town", realistic sets constructed by the Atomic Energy Commission to measure effects of atomic weapons on animals and various types of buildings.

The site is only open to the public once a quarter, with the exact day picked a few months in advance. The site is closed on Friday through Sunday, so the public tours will always fall on a Monday through Thursday. To find out the day of the next tour call the Office of Public Affairs at Phone (702) 295-0944. You meet at the Department of Energy Nevada Operations Office in North Las Vegas at 7:00am, and a bus takes you there and returns you by 4:30pm. You need to call several weeks in advance and give them your full name, your date of birth, your Social Security number and your place of birth. Radiation badges are no longer necessary when visiting.


Well its CLOSE to Area 51... And you will have a glowing experience 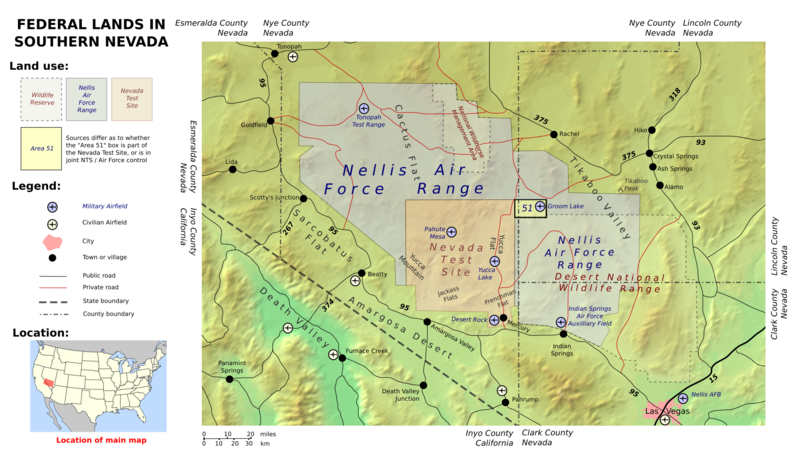