We knew that history would be made during this 7-seasons-long election season. We just weren't sure which history it would be.

Would former Massachusetts governor Mitt Romney be the first Mormon to lead a major party's ticket? Would Arizona governor Bill Richardson be the first Hispanic to do the same? Could former New York City mayor Rudy Guiliani become only the 2nd Catholic to become President? Fred Thompson the 2nd actor? Dennis Kucinich the first dwarf?

But as the state campaigns sallied forth, and the number of contenders on the primary slates dwindled, there was only one question of any real interest left. Could it be that Senator Hillary Rodham Clinton -- wife of the first black President of the United States -- would be the first woman to top a major party's ticket? Or, would it be that Senator John McCain would become the oldest man ever to top a major party's ticket? Okay, that's two questions.


Black? White? I think he's beige. That's the way the world is going anyways. Why fight it? This is the 21st century.

Originally posted by Daniem
reply to post by Tuning Spork

Obama does. Maybe to most whites' eyes he looks wholey ("typically") black. But, to blacks' eyes, what does he look like?

The old joke is "you all look alike to us", but there are so many variations in Africans -- variations that make the differences between Nordics and, say, Japanese, look downright superficial.

But moreover: What is the reason for Obama being refered to in the media as a "black" or "African-American" man? Is it that it's a more interesting story? Or do the media consider it to be a better "selling point"?

Or: Is his being called "black" when he can just as legitimately be called "white" a sign of media's racism? An "if-you're-part-black-then-you're-black" kinda thing? Discuss...

Yeah, lots and lots of people of mixed ethnicity look mixed. Some fall closer to one ethnic group then the other but it's usually apparent they're not fully one race.
A great example is people of mixed Caucasian and Asian background. To white people they often look very Asian. To Asians they often look very white. It's all a matter of perspective. Who's the appointed person to determine which race a person is based on appearance?
Even better...why is it important???

But, then again, there goes the media again.... 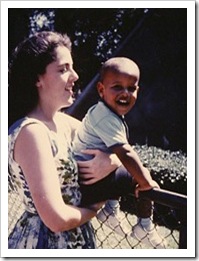 A young Barack with his mother Ann.


i wonder if she also had a "short vagina"
www.abovetopsecret.com...

Thinking further about how to respond....

There's animals and there's peoples. Animals don't care about what we say but peoples do.

To wonder aloud about the depth of Barack Obama's mother's person is just a tad undignified.

People can post any anti-Obama info they want and even a Super Moderator posts a reply without noticing the title was all in caps. The information presented in the opening post was not put in external quotes nor the source given and no one complains?

I see that DontTreadOnMe just fixed the title. I guess someone is still moderating this board. Thanks.

And Mr. Tuning Spork, Dennis Kucinich is not a dwarf. He is just small boned.


I realize that Mr. Kucinich is not a dwarf. It was a joke.

Originally posted by Tuning Spork
As for the all caps... I'll be back...


What I would like to see is your source, or did you just make all that up?

I hereby site myself.

Just consider that Barack Obama maybe just what what this country needs right now. I remember reading about when John F. Kennedy was elected that it was also a time when America was divided. He was able to bring the country back together in a way that no one else could. He paid the ultimate price, and I fear we may be seeing history repeat itself. I find it hard to believe that there are other Americans out there that can't see this and are perpetuating this scenario.

What role would you like to play in history? Are you someone that wants things to stay the same? If not then why start a discussion like this? Do you think it's funny? I for one don't find this humorous, and I always like a good joke.

posted on Jun, 8 2008 @ 12:12 AM
link
I thought this thread was funny as heck! And the OP's satire actually brings up important issues. While the media accuses everyone that is not voting Obama as being a racist... while they only focus on Clinton as being supported by women......... the media has proven itself to be very racist and sexist.

And I swear... if I hear one more black person say, "Finally, I can vote for someone who looks like me!"...... I'm gonna... I'm gunna... well I dunno... not buy a digital converter box and not have to hear the media kissing Obama butt anymore. No he doesn't look like you! Unless you're a black soap opera star. Get real people.

So this thread is what made you begin to post... why? Maybe you should read what you type and ask your self your motivation.

And the media did what?

Didn't they constantly show Reverend Wright enough for you? For someone who would like to see the media tear him a new one, I guess I would also be disappointed.

What is really funny is that people can click on stars, but they can't find the courage to say something.