In the first debate since Feb. 26, on stage at Philadelphia's National Constitution Center and moderated by ABC's Charles Gibson and George Stephanopoulos, Clinton said, "I am going to do everything I possibly can to make sure one of us takes the oath of office next January."

Through surrogates and spin, the two Democratic challengers have highlighted each other's misstatements and missteps this week, each trying to seize the momentum in these final contests...

...and place doubts in the minds of voters and superdelegates about their opponent's potential strength against McCain, the Arizona senator who is the Republicans' presumptive nominee.


First Hillary says she'll do everything in her power to make sure a democrat is elected, then she begins her attack on Obama. What a hypocrite.

The topic quickly turned to the latest political firestorm dominating the Democratic race: Obama's remarks at a San Francisco fundraiser in which he characterized small town voters as "bitter," saying they "cling to guns or religion or antipathy to people who aren't like them or anti-immigrant sentiment or anti-trade sentiment as a way to explain their frustrations."

Obama sought to clarify his comments by saying "that, when people feel like Washington's not listening to them ... then, politically, they end up focusing on those things that are constant, like religion.

"They end up being much more concerned about votes around things like guns, where traditions have been passed on from generation to generation," Obama said.


Obama this was a very stupid comment to make, but it seems once again you've managed to control the damage pretty well. I can't say the same for your opponents...

Obama's relationship with his former pastor Rev. Jeremiah Wright also came into question, specifically Obama's understanding of Wright's full range of controversial remarks, more than a year ago, when he disinvited his longtime pastor from a campaign event.

Wednesday, Obama once again denounced Wright's sermons which included, among other things, the charge that the United States brought on the 9/11 attacks with its own "terrorism."


Who actually thinks we're not at least partially responsible for the 911 attacks? I mean come on. We stick our noses in the middle east, support Israel (which was the main reason the 911 Commission found as a motive for the 911 attacks), and expect the world to love us.


Obama also defended the church and his longtime pastor's 30-year career, citing his work "in ministries, on HIV/AIDS, prison ministries, providing people with the kind of comfort that we expect in churches."

Clinton reiterated her criticism of the Wright relationship, saying that, based on his sermons, Wright would not have been her pastor and that she would have left his church if she had heard them.


Thanks Clinton, but no one really cares what you say these days. You've been lying through your teeth the entire time and the American public is sick of untrustworthy politicians.


Clinton had her turn in the hot seat during the debate as well, responding to her widely criticized embellishment of the details of a trip she took to Bosnia as first lady in 1996, where she described landing "in an evasive maneuver" "under sniper fire." Video footage later revealed Clinton participating in a greeting ceremony with school children on the tarmac.

Responding to a video question submitted to ABCNews by Pittsburgh resident Tom Rooney, who said Clinton lost his vote over the Bosnia flap, Clinton said "I'm embarrassed by it, I've apologized for it, and I've said it was a mistake."

Be honest and you won't have to worry about that.

I would really love to see Ron Paul and Dennis Kucinich step their game up now... 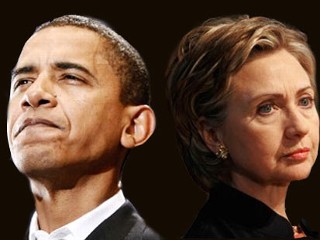 abcnews.go.com
(visit the link for the full news article)

posted on Apr, 17 2008 @ 08:48 AM
link
I watched the whole debate and can say I was horrified at how badly it was moderated. ABC should be ashamed of its self. Not only was it biased in my opinion, they hardly even asked questions about REAL issues

I'm not the only one that feels this way, there are over 12,000 comments on abcnews.com read the comments and see for yourselves. It was a complete laugh at the american peoples intelligances to air such a shame of journalism.


I agree with ya. It was all about them personally. Well what about America and the people? Can they tell us what they are gonna do for their country? It's all about change, but what's gonna change? For one the debate was a big change. It reminded me of a Saturday Night Live skit. Where's the real question? What happen to people like Washington, Paine, Adams, Jefferson, real people who cared about the people and their country? It's all about power and money now and like Clinton said. She'll do anything to get that power and money. We need some one who's not afraid to stand up and put America back in it's place. Back in the hands of the people. Clinton and Obama work for us, but I don't see it that way anymore.

posted on Apr, 17 2008 @ 09:23 AM
link
I saw it. There was no 'brotherly love'. The two of them want the other to fail. The question about picking up the non-winner as VP was great.
It definately wouldn't work.

I'm sure that which ever one doesn't win - he or she will vote for McCain - no matter what they say publically about voting democrat.

posted on Apr, 17 2008 @ 11:11 AM
link
IMO there was neither "love" nor "hate' expressed. Clinton and Obama are two candidates who want the Democratic nomination. Each one thinks they are more qualified than the other. Of course they are going to criticize each other. I don't know why this is cause for either condemnation or praise.

I agree that the debate questions should have focused more on the issues and less on the personal mistakes and allegations, but the sad truth is these are what many people vote on.

I thought each one explained and defended themselves well on the controversial matters and overall they were respectful toward each other.

posted on Apr, 17 2008 @ 10:28 PM
link
Keith Olbermann played a clip on his show today, it was Hannity doing an phone interview with George Steph... and basicly Hannity gave George the question about the Weather Gate thing. George literally read it word for word during the debate. I know its almost to blantant to believe right!! I thought so to, but here is the clip so you can see and hear for your selves.