posted on Feb, 3 2008 @ 11:10 AM
link
As part of an introductory article about 9/11 resources I'm writing at the moment (see here), I thought I'd ask what other discussion forums members of ATS consult when looking into 9/11 issues.

I haven't come across any single forum/List which is the equivalent of "UFO Updates" in relation to UFOs - i.e. a long-running email discussion List the archives of which contain the views of the top names within the field, whether "believers" or "skeptics".

So, which 9/11 forums/List do you find useful? letsrollforums? 911movement forum? James Randi JREF forum? Others?

you may want to add this site to your list....it is still in progress but already has quite a bit of information:

It is set up like Wikipedia and very user friendly.

There is another conspiracy forum called Jref. forums.randi.org...

This is a skeptics forum, so truthers beware!! (they can bite!)

There is a "TAGS" feature that will take you to the thousands of discussions regarding almost all 911 conspiracies.

you may want to add this site to your list....it is still in progress but already has quite a bit of information:


I noticed that site you were recommending were listing all of the 19 hijackers according to the 'official story', yet at least 7 of them are still alive.

I wouldn't trust such a site.


Not to derail....but please provide evidence to back up your post.


Not to derail....but please provide evidence to back up your post.


Capt you know how to surf the internet, the information you request is one click away. Google "Hijackers still alive" 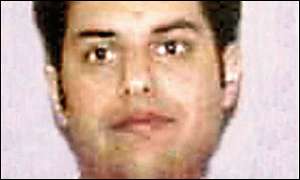 Another of the men named by the FBI as a hijacker in the suicide attacks on Washington and New York has turned up alive and well.

The identities of four of the 19 suspects accused of having carried out the attacks are now in doubt.

Saudi Arabian pilot Waleed Al Shehri was one of five men that the FBI said had deliberately crashed American Airlines flight 11 into the World Trade Centre on 11 September.

His photograph was released, and has since appeared in newspapers and on television around the world.

Now he is protesting his innocence from Casablanca, Morocco

Here's another source incase you think BBC is not a source.

Resurrected Hijackers
Suicide Hijackers Identified by the FBI Proclaim Their Innocence
Of the 19 identities assigned by the FBI to the alleged suicide hijackers of the four commandeered jetliners, at least six have been disputed. The FBI's September 14, 2001 press release identifying the suspects included names and, in some cases, other personal details. 1 The FBI's September 27, 2001 press release included color photographs for each of the 19 suspects. 2

Reports
A handful of reports, most from one to two weeks after the attack, identified at least six men living in the middle east whose names -- and in some cases other identifying details -- matched those on the FBI's list.


This has yet to be dunked, because it cant...

Back to the topic then, please. And sorry for this derail, but I can't stand bad sources No offense, capt.


then you my friend would have been wrong too....

please look at the date:
From the link Ivan Posted:

Once again an outdated statement that was later explained:

I doubt you will read it, but this disproves what Ivan posted...(or what you would have)


then you my friend would have been wrong too....

please look at the date:
From the link Ivan Posted:

Once again an outdated statement that was later explained:

I doubt you will read it, but this disproves what Ivan posted...(or what you would have)

READ THE DATE ON YOUR "SOURCE"


So you provided one poorly researched article written 5 years after by the same BBC that pushed the "FACT" that IRAQ has Nooklar weapons.

Now here is another source, i have over 25.

ISLAMABAD, Pakistan (AP) — Saudi dissident Osama bin Laden congratulated the people who carried out the deadly terrorist strikes in the United States, but denied Wednesday that he was involved, a Palestinian journalist said. "Osama bin Laden thanked Almighty Allah and bowed before him when he heard this news," Jamal Ismail, Abu Dhabi Television's bureau chief in Islamabad, said, quoting a close aide of bin Laden's. Ismail said the aide, whom he wouldn't identify by name, called him early Wednesday on a satellite telephone from a hide-out in Afghanistan. Bin Laden praised the people who carried out the attacks in Washington and New York,


Thanks IvanZana, for this important peace of evidence and more.
Watch your steps, I don’t want to see you banned.

posted on Feb, 4 2008 @ 01:10 PM
link
My thanks to those that posted suggestions and links in this thread before it was moved from the 9/11 Forum to the "Interesting Websites" section of BTS.

I'll carry on working on the "Free 9/11 Researcher Starter Park", including a section relating to 9/11 discussion forums, akin to the "Free UFO Researcher Starter Pack" which I've previously posted in the Aliens & UFOs forum - which seems to have been fairly popular judging from the number of flags given to it by ATS members (103 and counting...).

Lots of good information there, I am kind of surprised that no one else seems to use it around here.


Most recently, Osama bin Laden stated, in an audiotape released on May 23, 2006, "I was responsible for entrusting the 19 brothers - Allah have mercy upon them - with those raids ...." Bin Laden added, "the participants in September 11th were two groups: pilots and support teams for each pilot in order to control the aircraft."

Earlier, in a videotape broadcast on October 30, 2004, Osama bin Laden unequivocally admitted that he and al Qaeda had planned and directed the September 11 attacks. He stated, "I shall talk to you about the story behind those events (the September 11 attacks) and shall tell you truthfully about the moments in which the decision was taken ...." He confirmed his direction of the details of operational planning, stating, "for the record, we had agreed with the Commander-General Muhammad Atta ... that all operations should be carried out within twenty minutes, before Bush and his administration notice."

Plenty more on that if you need it.

I copied it from the website I linked, you may want to check it out yourself.

I am surprised a mod did not move this to the 9/11 forum itself.

Originally posted by COOL HAND
I have found this to be the best source of credible information on 9/11.
9/11 links
Lots of good information there, I am kind of surprised that no one else seems to use it around here.

Many thanks for that link - I had overlooked it so far and that's precisely the type of resource I want to highlight in the "Free 9/11 Researcher Starter Pack" I'm working on.

I hope by hightlighting such resources, and some of the more interesting discussion forums on which relevant material has been discussed, it may reduce the amount of reinvention of the wheel that goes on in relation to this subject.


Originally posted by COOL HAND
I am surprised a mod did not move this to the 9/11 forum itself.

I started this thread in the 9/11 forum and it was moved by a mod to this forum (i.e. the "Interesting Websites" forum).

Since then, you are the only person to have posted. I'd be more than happy to have it moved back to the 9/11 forum itself...