posted on Oct, 30 2007 @ 05:36 PM
link
Below are pictures of what people call the "airport terminal" on Mars, taken in the 1970's my a Mariner satellite. I've never seen any newer satellite pictures of the thing. Why not? It's by far one of the more convincing structures on Mars and the Moon. Anybody ever searched newer NASA photos to try to find the region and locate the thing?

posted on Oct, 30 2007 @ 07:27 PM
link
Have to say I've never seen/heard of this "anamoly" before. Having said that, it looks much less sensational on the mars news page as it does in your photobucket image. I'd wager the photobucket image has been edited, as it contains a 3D feel to it that is not present in the original Nasa aerial views.

Not a photo expert by any means, but that's my three cents.

posted on Oct, 30 2007 @ 07:54 PM
link
You know, I have a really dumb, or not, question. Every time a photo comes up, I hear how it was "manipulated" in some way by either the poster or the source. The first things out are how it doesn't "look" right. So exactly what picture of the unknown could possibly look right?

First, it would seem we need to decide just exactly what "right" is, in the context of planetary photos. And then we need to decide who can say which photos are manipulated and which are not. We need a base reference.

I'm NOT an "Living/Dead Mars/Ruins" person, just someone that sees the one-sided-ness of many of these arguments. I want to learn, not have people tell me how they would wager a bet, or how it feels, but something a bit more concrete than their gut.

I can understand explanations, even when they are far-fetched. And that goes for both sides. But when you base it on nothing but hot air, you lose points in my book.

Just look at what is brought out and don't let what you want to believe be a factor in what you say about what is there. Everybody. Both sides. Let evidence speak for itself.

It's fair enough to say what you see, or don't see. But don't bring in wagers and feelings as evidence. Show your evidence, and let everyone decide for themselves.


I would also love to see some real, hard evidence. Proof absolutely speaks for itself, but before it does, it will be scrutinized by everyone who sees it. Look before you leap sort of ideal.

Personally, the original images on the linked page didn't look like anything amazing. The third party image from imagebucket (origin unknown?) did however. But that's where the scrutiny comes from. If the third party image is so spectacular and "alien," why isn't it on the aforementioned page, as proof of the theory?

posted on Oct, 31 2007 @ 01:33 AM
link
I'm not completely sure what NGC2736 was trying to say, and I hope he didn't think I was suggesting it was an airport terminal. That's just the identification name people have given it because that's what it resembles, not that's what it actually is.

The picture on my Photobucket page is was found on another site and is the same one used in a book I have. It was contrast enhanced to better see the image. On the webpage, the one on the left is the original but it's very small and hard to see. It resembles quite well the contrast enhanced version though. It just does not look like a regular natural formation. That's why I'm specifically asking for newer photos than these old 1970's ones so we can finally either put the thing to rest as nothing, or confirm that it's artificial. It's a far better candidate than a lot of things people are reading into some of these moon and mars images, so I would have thought people would be trying to find the area on newer satellite images.

The structures that are artificial for sure are the ones NASA has been smudging out, so we are left trying to find things that have passed over unnoticed by them. I just happen to have on of the NASA hidden structures in the picture below. They sloppily left just enough showing that you can tell there is something not natural there which is why they smudged it out in the first place.

posted on Oct, 31 2007 @ 01:42 AM
link
I should also add that an Australian author who was interviewed on Coast to Coast just happened to mention that he and most of Australia heard Apollo 11 astronaut Collins say he saw what looked like a building several stories tall on the moon as he was orbiting around it. That part of the transmission was later edited out. It would be interesting to see if somebody ever made a recording of that and still has it.

Originally posted by Elhardt It's a far better candidate than a lot of things people are reading into some of these moon and mars images, so I would have thought people would be trying to find the area on newer satellite images.

A better candidate? Ummmm no I think not...

Here is the are from the original "contrast enhanced" It clearly shows it to be a depression not a raised structure, and the lines are rounded not angular...

You say...
'we should look in the same area in newer pictures..."

Which area would that be? there are co-ordinates(1.9°S 186.4°W) but no recognizable features... Also the mapping of Mars is only about 10% so how do you propose we ask for that area to be taken?

Really? Better than THIS? 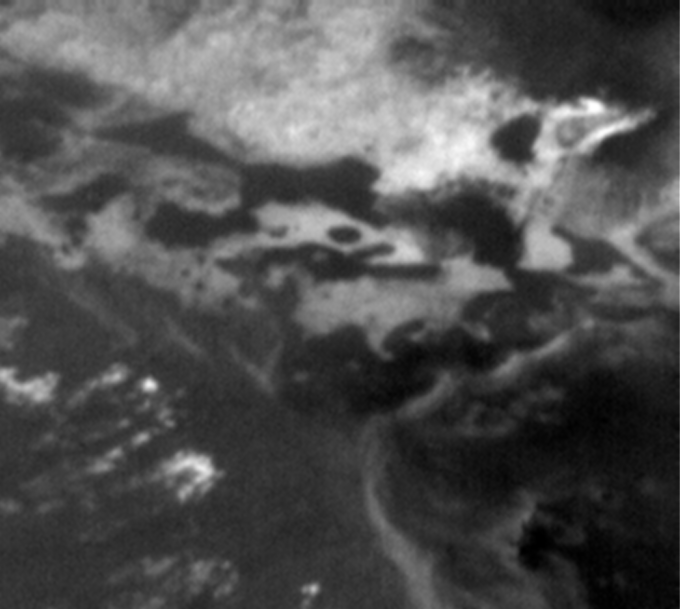 Or my Herd of Martian "Whatchamacallems"

No that old Mariner one can 'rest in peace'. The 'enhanced' version has been adjusted to look like a structure...

posted on Nov, 2 2007 @ 05:32 PM
link
Thanks Zorgon for the additional pictures. I should point out I didn't say is was a better candidate than ALL other pictures, just most. I'm seeing way too many people picking out things that look almost like nothing to start off with, and as always happens the closer one gets, the less artificial they look, the "Mars Head" being a perfect example.

The close up picture you posted of the "Mars Terminal" still looks raised rather than a depression, though finally seeing it closer it does look a lot less impressive.

I've seen the next picture down before. That's a good one.

The last one looks weird and unexplainable, much like the "Mars Trees" and stuff like that. But it looks natural (maybe not natural for Mars but), not artificially made by some other intelligence.

Originally posted by zorgon
Or my Herd of Martian "Whatchamacallems"

Zorgon, this is an inverted image. I just did this -- un-invereted it, lowered contrast and rotated 90 degrees CW. All of a sudden this looks like a bunch of normal craters. Big deal.