I would have to agree with this article. I remember the Pacer and Gremlin really well they were so damn ugly.


Does anyone else remember these cars? Or maybe you have one to add to their list.

the yugo was pretty fugly too

posted on Sep, 10 2007 @ 12:06 PM
link
these cars have no aliby they UGLY XD
my renault 11 is not a gallardo but still looks a little decent
theres one mazda with a high roof liek its a car for really TALL people.thats my take for ugly

I had a 81 La Baron convertible, and I always thought it was a decent looking car. It was a K car, but a good one. It had the 2.6 Mitsu 3 valve engine, and that was before they started putting the bad Mitsu trannys in ‘em. I had a 90 La Baron Conv. Too, and I always preferred the K car for some reason. Must have been the rich Corinthian leather.

U call that a chevy?

Think you can top that?

The AMC "Pacer".....God! What an ugly car. The thing that really gets me about the "Pacer" was that, at the time, it was actually touted as being a car that designed for people. For example, the driver side door was four inches shorter than the passenger door. This would allow for easier entry and egress for passengers while allowing for the fact that the drivers door would have lower "street side" profile.

This certainly did sound good at the time. What those AMC engineers didn't account for was that the driver side door kept hitting the curb or sidewalk.

A friend of mine had a pacer during the period when this car was new and it was, indeed, a lemon. My buddy's Pacer had fabric seats -- the color of the seats would actually bleed through to one's clothes! Whoa to anyone wearing white !

Think you can top that?


That doesnt count that car wasnt born that way some horrible person did that to him, no not a person a monster! A monster!

posted on Jan, 3 2013 @ 03:08 PM
link
No no no, you are all wrong, I give you the world's TRULY ugliest car (although that Pontiac Aztec thing gives it a good run for ugly money)

Behold, the Ssangyong Stavic, AKA Rodius, a car that proves that even soccer mom's have to wear paper bags sometimes

posted on Jan, 3 2013 @ 04:51 PM
link
Nissan Juke. I think a lot of cars that are ugly have a certain character that makes them charming, the Juke is an abomination and has no redeeming qualities aesthetically to my mind.

Originally posted by Domo1
Nissan Juke. I think a lot of cars that are ugly have a certain character that makes them charming, the Juke is an abomination and has no redeeming qualities aesthetically to my mind.

Is that Nissan Juke or is it Nissan's JOKE? I did a web image search of that abomination and I swear, my eyes bled lol.

I take everything back, Ssangyong is no longer the producer of the World's ugliest car. Nissan got jealous and have stole the accolade for themselves 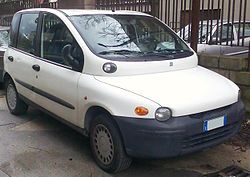 
I've always been kinda fond of AMC's myself, the Gremlin and Pacer (the ones with the AMC engines, not the awful Audi 2.0 inline four) were tough as nails, and those little cars had a lot of personality.

One of the Ugliest cars to me would have to be the Bugatti Veynron, it's fast as hell, but also ugly as hell (flame on).

Also, Pontiac Aztec (of course), the Ford Mustang II, any Chrysler K car, The Fiat Multipla, the Nissan Cube, and the Scion xb (the toaster).

It's funny, people talk about how ugly AMC Gremlins were, but they were popular, they're the only reason AMC lasted as long as they did, really.

posted on Apr, 5 2013 @ 03:08 PM
link
bmw isetta, just for the reason it has one door located at the front of the car, and it where in a accident would would half to get out through the roof.