page: 1
206
<<   2  3  4 >>
log in
join
share:
mikesingh
+108 more
posted on Sep, 8 2007 @ 05:54 AM
link
At the outset, I would like to mention that the clearest photographs yet of gigantic alien spacecrafts published in the French newspaper L’actualite insolite had been posted earlier last year in my thread Alien Objects Orbiting Saturn's Rings? by balonO.

Unfortunately, balonO’s post had been lost in the deep caverns of the thread and out of sight. Considering its importance, I thought it needed to be exhumed and discussed in a different thread as it deserves more attention than it has.

That said, this particular photograph is corroborated by another taken in the infra red spectrum by the Hubble Space Telescope of the gigantic object near Saturn, and posted on another thread of mine here. This pic is reproduced below:

Now for the photograph in the French news paper which is similar to the one above, purportedly taken by Cassini near Saturn….. 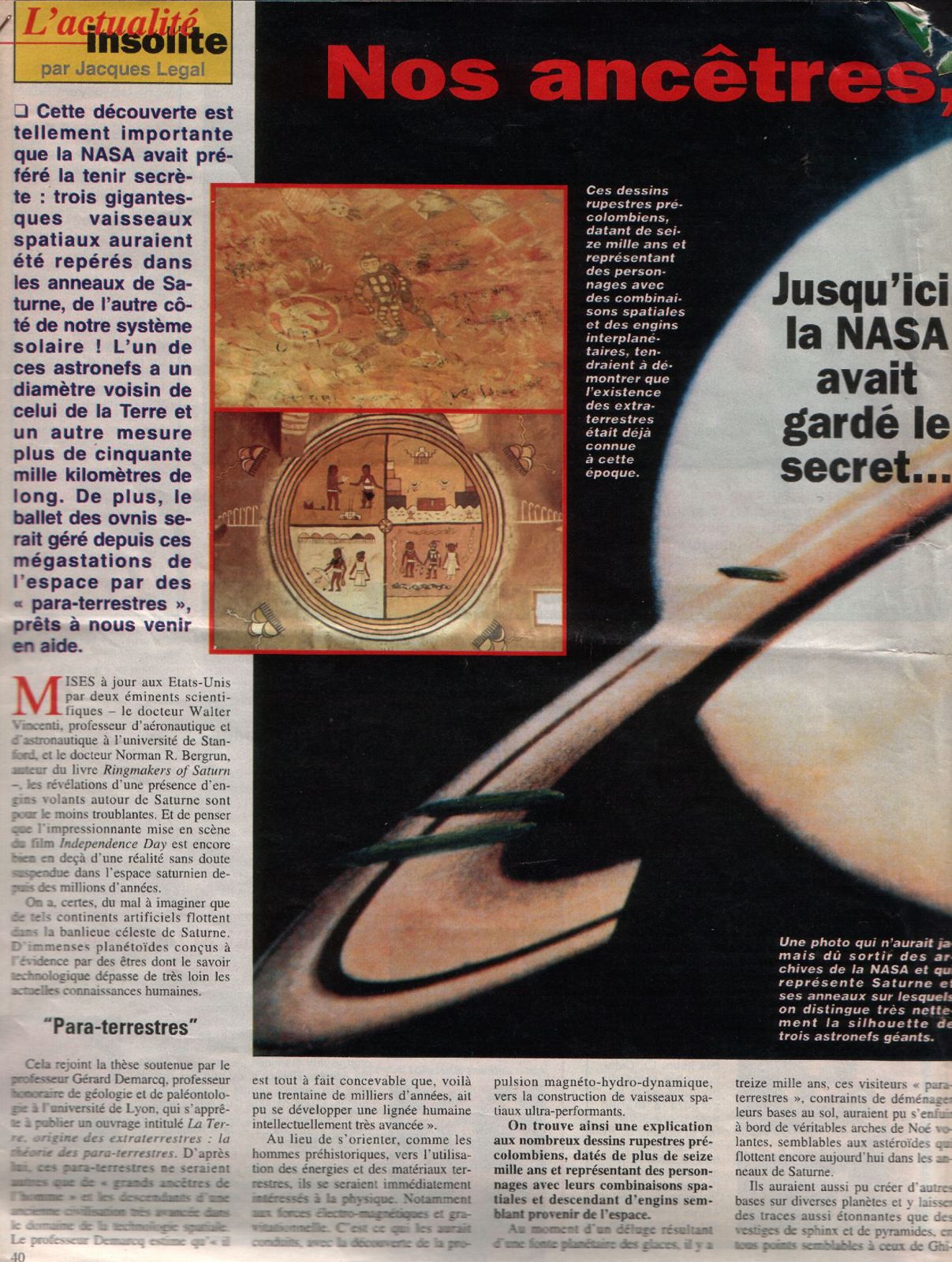 It is in French, so what it basically says is that those objects are massive OVNIS (UFOs) photographed by Cassini near Saturn, and put under wraps by NASA. One of the objects is Earth sized and one over 50,000 Km in length (Four times Earth’s diameter!)

How did this French news paper get its hands on this photograph? Unfortunately, we don’t have more info on its authenticity. Can the photo experts here try and interpret it?

Keeping in mind the similarity with the HST’s infra red image shown above, it may be an actual photograph taken by Cassini. If genuine, the implications are mind boggling! Are we then seeing incontrovertible evidence of an alien presence in our Solar System?

And another thing. Small moonlets/asteroids even a couple of hundred miles long have been mapped and named. These objects are Earth size and some more than 50,000 Km long. Then why have these objects not been named? After all, they’ve shown up in the official photographs taken by the HST. But then, that’s probably top secret! You can’t go around naming huge alien objects, can you? Smells of a cover-up, what?

Whatever, the truth is out there in the rings of Saturn!

I certainly cant see that big an object in the photo. But i might be wrong!

posted on Sep, 8 2007 @ 06:26 AM
link
Very interesting pictures; they remind me of a similar object allegedly photographed by a Russian probe in the vicinity of one of the Marsian moons. Whatever it is, it must be truly massive!

I fear it is a little hopeful to say "NASAs cover-up blown" however, at least as far as the mainstream media/population are concerned. No doubt this will be (correctly or not) given a mundane explanation and quietly forgotten.

An abundance of leaks and disclosures pertaining to UFO reality are occurring this year. The following examples are but a sample of recent developments.

1. On January 30, WRFX-FM, Charlotte, North Carolina featured an interview with a NASA scientist, Dr. Norman Bergrun. His book, The Ring-Makers of Saturn, reveals that NASA's Voyager I (1980) and II space-probes of Saturn's rings took photographs of an estimated 7000-mile-long elliptical (cigar-shaped) craft orbiting in the rings. ......

(i don't know if already posted somewhere else)

I didn't know that NASA's Voyager I and II took photographs of an estimated 7000-mile-long cigar shaped craft orbiting Saturn's rings! I wonder whether we'll ever get to see the photographs?

It really is at the stage when any NASA picture you now see contains more airbrushing than actual image.

I am thinking there is like an intergalactic freeway passing right through our solar system it is so busy up there. We do not have long to go until all this is exposed.

Originally posted by sonicology
Very interesting pictures; they remind me of a similar object allegedly photographed by a Russian probe in the vicinity of one of the Marsian moons. Whatever it is, it must be truly massive!

That's right! It was the Russian probe Phobos II that took the pic, immediately after which it stopped all transmissions. Was it destroyed by the alien object? Here's the pic...The similarity is striking!

Originally posted by mikesingh
It was the Russian probe Phobos II that took the pic, immediately after which it stopped all transmissions. The similarity is striking!

Yes! That was exactly the picture I was thinking of, thanks for digging it up

I have no idea what that is, but I know for sure what it isn't i.e. swamp gas or a weather balloon...

The sheer size is what boggles my mind. I would of thought that there would have been a great deal of amateur observations of these objects.

Originally posted by Cyber_Wasp
Awesome stuff you guys have posted.

And the preview of one of the objects near the sun:

Great story. Any links to Nasa pictures of the same?

All I know is that our world keeps getting stranger every day.

posted on Sep, 8 2007 @ 11:39 AM
link
I'm a little confused. Is the french article claiming that the photo with those three cigar shapes is real, or is that an illustration for their article?

posted on Sep, 8 2007 @ 11:44 AM
link
Those objects look very much like the "Apollo 20" object being "recorded". I find the authenticity of that video to be extremely sketchy.

Same color, same texture, same object. Same hoaxer? Also, if that image was taken by Cassini, it is completely unlike the other images it has taken.

Here are some examples of the Cassini's photographic quality:

It also took this image of Hyperion:

Something smells fishy to me.

Originally posted by BlackProjects
Since Saturn a gas giant is so large this "ship" would be immense..
Anybody know roughly how large that would be.

Originally posted by sonicology
No doubt this will be (correctly or not) given a mundane explanation and quietly forgotten.

Chances are you are correct. Though with an object this size it's kinda hard to explain this one away as a blurred pic of the ISS (a favourite around this parts), a meteor, comet or small moon (a square object 10 times larger than the earth?)... and, next door's wedding releasing some chinese lanterns will most definitely NOT fly on this occasion.

I supposed it can be explained away as a gigantic shadow(s) on saturn's rings... but that still leaves the problem of WHAT is making them.


The ship's length is about 1/3 the diameter of Jupiter. Massive. The damn thing must have a gravitational pull of it's own.

posted on Sep, 8 2007 @ 12:13 PM
link
Awesome find guys, I believe its just a matter of time.....we know they're there...the Gov. knows we know...the Aliens know we know.... for the last decade we have been delicately desensitized, not only to the FACT there are extraterrestrials other species, but that some of them are malevolent. The fact that all these other Gov.'s are coming forward and pushing or forcing disclosure lead me to believe that the reports and sightings to come shall be truly wondrous....


2. Three days before the U.S. Fourth of July, 1996, the Japanese were scheduled to declare Independence Day from the U.S. Government's UFO cover-up, and release the facts of UFO reality and extraterrestrial visitation to their people. On July 1, Japan's Hakui City Municipal Government was scheduled to open a multi-million-dollar Cosmos UFO Museum, created with federal government funds. NATO/SHAPE Command Sgt.-Major Bob Dean was invited to address the opening ceremonies crowd. Dean was convinced to come when the Japanese officials implied that the Museum contains, among other evidence, physical artifacts from UFO crash retrievals, and proof of extraterrestrial corpses found. But in mid-June Dean learned that the Japanese were not going to put the UFO artifacts and evidence of ET corpses on display. In an apparent quid pro quo, the Japanese Government was granted generous trade concessions by the U.S.

Great find mike and internos... starz for both flagged.

People who don't believe in UFO's or Aliens are always saying that Earth is the only habitable planet. It is certainly possible that millions of years ago there were planets that E.T's left, and now they can move around space on their own "artificial planet". I think Earth being the only habitable planet that we know of is not justification to deny the existence of aliens in one more way now.

posted on Sep, 8 2007 @ 12:21 PM
link
If there is indeed a cylindrical object that is as big as mentioned orbiting Saturn then what other explanation is there other then its our own "top secret" UFO or its an alien UFO? To my knowledge of space and our history of recording/exploring it such an object would have been recorded and named as soon as it entered our solar system?

This tells me a few things I already highly suspected, NASA is indeed heavy into the "cover up" of whatever is going on and there is indeed something going on beyond probably my greatest imaginations! I really hope these are real objects because if so there is no denying a truth that big!