posted on Jun, 13 2007 @ 02:31 AM
link
I received the following picture in my email inbox, and recognized it as one of those emails. You know an odd photograph but with a very inaccurate description. And the mails are just forwarded from one person to the next; so finding the source is pretty tricky... I receive hundreds of these. This one caught my eye, because I’ve never seen it before, and couldn’t find any information on it.

The following description accompanied the photograph:

A scientist, Jan Sundberg, on an expedition in Antarctica, took this photograph. The ship passed the melting iceberg, and Sunderberg, busy taking photographs of the icy landscapes, spotted the skeleton in the ice and quickly snapped the following photograph. About 2,4 meters of the skeleton was visible, but Sunderberg says the iceberg were huge, there's no saying how long the skeleton may have been. Back in civilization scientists are baffled. There are no limbs on the skeleton, suggesting that it's a snake's skeleton. While snakes of well over 2,4 meters are not uncommon, the circumference of the snake indicates that the snake was well over 14 meters long. Is this proof that there are real-life monster snakes roaming the Artic circle? Have you seen the movie Anaconda?

I can spot at least 3 problems with the description:
1. Sunderberg (if it's the same on) is the founder of the GUST organization that researches/searches for legendary lake serpents and sea creatures... He would represent himself all over the Internet with such a photograph. I can't find a single reference of this photograph on the Internet.
2. The lack of detail. Dates. Ship's name. What expedition? Etc.
3. Snakes are reptiles. Reptiles are cold blooded. Cold-blooded animals won't survive in the Artic.

So I have no reason to believe the description is accurate.

Anyway, here's the photograph. If anyone know where it's from, or what it is, now's your chance to impress us. 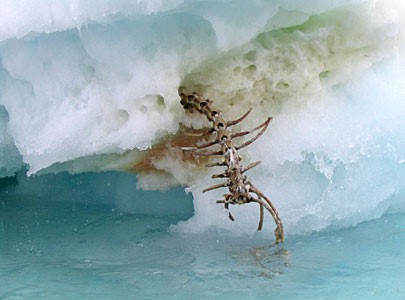 Could be a whale or seal carcass that got trapped in an iceberg. All the colouration in the ice suggests it is recent.

The suggestion that the animal has no limbs is a bit of a reach by the original snippet. They could have fallen off, got eaten by scavengers etc.

In short, if anyone hoped to discover anything by releasing this photo, they would have been better off actually bring back the skeleton itself.

As it stands, we're just speculating and don't even know if the photo is real.

Originally posted by stumason
For starters, the original snippet can't seem to decide if it is the Arctic or Antarctic..


Well spotted, I missed that one! This tells us that the description is definitely BS, seeing the Arctic means North Pole, and Antarctica South pole. Duh!

Originally posted by stumason
Could be a whale or seal carcass that got trapped in an iceberg. All the colouration in the ice suggests it is recent.


Well, there is quite a thick layer of ice on top of it, and ice preserves pretty well, so for something to decay like that could take a very long time.

Still, the origin of the photo would help shed some light.

Which has a link to an article here

That iceburg gets around as the newspaper article says it floated past Newfoundland. Could just be a really good pic that forces reporters to do their own 1000 words...happens too often in today's media.

And a couple of news stories linked from that thread. As usual, the story in an email is completely wrong.
Shocking

Skeleton in ice stirs scientists
The photos were taken near Newtown, in Bonavista Bay, by Eli and Donna Norris on the weekend of May 26, said Ruth Knee, a friend who forwarded them to the Fisheries Department in hopes of identifying the bones.

posted on Jun, 13 2007 @ 03:51 AM
link
Seems there is a theory of the Antarctica holding secrets of the past, as far as for well perserved fossils.


A massive volcanic explosion may have killed and preserved the baby, in a far warmer Ocean than today. The fossil represents one of the most-complete plesiosaur skeletons ever found and the best-articulated fossil skeleton ever recovered from Antarctica, even if the skull has eroded away from the body.

The world has changed in many ways since that time, just turn's out to be a very good preservatory, for lack of a better word.

Didn't find a whole lot on the topic at hand, but it does support the possibility of it actually occurring.

Well, that solves that then. Well, at least the origin of the photograph.

reptiles, being ectotherms, can't normall survive freezing. one exception are painted turtles, whose hatchlings freeze in their nest after hatching then defrost and emerge when spring comes.

posted on Jul, 22 2007 @ 10:34 AM
link
i believe it has been identified as a plesiosaur. read the thread before showing off you massive sherlockian skills...

A massive volcanic explosion may have killed and preserved the baby, in a far warmer Ocean than today. The fossil represents one of the most-complete plesiosaur skeletons ever found and the best-articulated fossil skeleton ever recovered from Antarctica, even if the skull has eroded away from the body.

posted on Jul, 23 2007 @ 06:04 AM
link
Although an exlplanation has been given, It still doesn't explain the discoloration in the ice.

I wouldn't think there would be that much 'mess' left after thawing out.

With more and more ice melts occuring, It could possilbly solve some long time mysteries... or create new ones.

Sepreate from the debate to what it is. My question is how does it get in the ice like that? did it die inbetween an underwater crevase in one of the icebergs and get strapped like that.

I also think that freezing a pleisiosaur wouldn't prevent it from decomposing entirely after a few million some odd years. Somethings going to eat it bones and all after that amount of time.

posted on Jul, 25 2007 @ 04:10 PM
link
remember the russian scientists that ate mastadon meat? they found a frozen mastadon, so well preserved, they were able to eat it.

posted on Jul, 25 2007 @ 04:13 PM
link
Ive never heard that before. Is a mastadon a woolly mammath? Thats the story I heard. I heard they ate one of those hairy elephants(isnt that a woolly mammoth)lol

posted on Jul, 25 2007 @ 04:21 PM
link
I don't buy the story of the russian scientist who ate the mastadon meat. Just don't. Besides weren't mastadons around much later than pliesiosaurs.

Originally posted by BASSPLYR
I don't buy the story of the russian scientist who ate the mastadon meat. Just don't. Besides weren't mastadons around much later than pliesiosaurs.

truth by instinct, eh? okay. whatever floats your iceberg.

Give us a link. Its not that I dont believe you its just ive been lied to before.