posted on Jun, 8 2007 @ 02:16 AM
link
While browsing the always entertaining galleries at Cryptozoology.com I stumbled upon some very interesting pictures of what looks like a common pigeon (feral rock pigeon) covered in paint.

Closer inspection shows that it may not be paint as the colours are "evenly" distributed, as it would be naturally. The feathers aren't sticky as paint would cause the feathers (and barb) to stick together. The second picture especially illustrates the colouring in the plumage.

The following description accompanies the pictures:


A colleage took this photos last summer when we worked in Barcelona/Spain. As there is a free flying population of little green parrots, she is convinced this is a pigeon/parrot hybrit. I can not immagine this is possible, but the animal was there. Beside the coloration it looked like any other pigeon in Barcelona. Who has an idea what happened?

Now as we all know, pigeon/parrot cross-breeding would be up there with "impossible", seeing that Pigeons are from the order Columbiformes, and parrots from the order Psittaciformes. (They have to be at least from the same Genus to interbreed.) 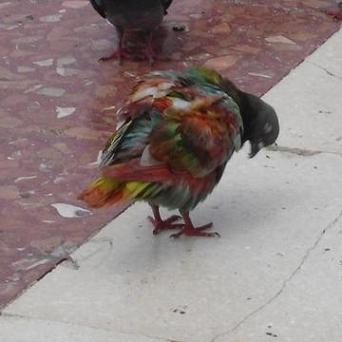 Take note of the coloration on the tail feathers: 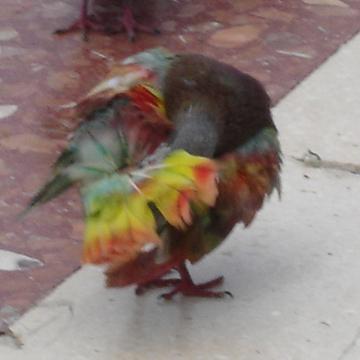 Any suggestions as to what's going on here?

posted on Jun, 8 2007 @ 07:04 AM
link
Ha ha, that is a funny looking bird. Looks like a hippy pigeon. But, I can see a pigeon/parrot mix in that. I guess the one arguement that I can make is to say that in New York city there are probably millions of pigeons, and I have seen a lot of parrots there too. You would think that in a city that large someone would have spotted some cross-breeding birds at some point.

posted on Jun, 8 2007 @ 07:18 AM
link
OK,this qualifies as a UFO, in the strictest sense of the phrase. And being an old hippy myself, I feel there are certain things I should point out.

This critter has no beads. Any self respecting hippy has beads, so this is in fact not really a hippy.

Since we have only photos of the object, and not the 'bird in hand', it is reasonable that Occam's Razor falls on the side of this being skillful use of cgi.

There, now I've put another myth to bed.

[Actually, that's freaky. And thanks for the post to my profile Gem, it brought me over to see this.]

Originally posted by NGC2736
[Actually, that's freaky. And thanks for the post to my profile Gem, it brought me over to see this.]

As the new Crypto FSME I thought I'd do some marketing. Looks like it's working. (And don't be a stranger now! )

posted on Jun, 8 2007 @ 08:08 AM
link
I strongly contend that this is not a parrot-pigeon combo as the alleged 'hippy' pigeon doesn't seem to have parked his painted VW van anywhere - and as any intelligent person knows, hippies don't like to walk if they can help it.

Can it be that it is the extinct BLUE pigeon - which although not as colourful as your hippie parrot/pigeon, is equally beautifully colourful.

Or perhaps it is a Pompadour Green pigeon?

Originally posted by Gemwolf
As the new Crypto FSME I thought I'd do some marketing.


Congrats Gemwolf
As for the pigeon/parrot could it have been exposed to something or did it eat some color dye?

I don't know why the pigeon would be dyed, but that's what appears to have happened.

I am reading "The Trouble With Physics: The Rise of String Theory, the Fall of a Science, and What Comes Next" by Lee Smolin, and it was his wonderful anecdote that sparked this realization. He said that a philosopher once told him, you think all swans as being white, so when you see a red swan, you go to look for the person who painted it.

posted on Jun, 8 2007 @ 07:09 PM
link
Ah, I get to join that elite group who have spotted a hoax and called it right. It was my error to think cgi, but this was my first debunking.

I hope I didn't *cough* ruffle any feathers. But my gut instincts told me it couldn't be a true crossbreed, so it had to be a *cough* flight of fancy.

The patterns don't really look like they are artificially applied.

I'm not saying that it is natural, but it seems to me that the variagation is such that air brushing seems unlikely, unless the bird was anesthetized, which is possible, and the "artist" went to a heck of a lot of trouble to paint this bird.

I don't think there's any cross breeding going on either or this would be more widespread, as most cities seem to have at least a small population of wild parrots and way more pigeons (not to mention the cross-species issue).

Mutations do occur, you know.

posted on Jun, 9 2007 @ 06:42 AM
link
It would seem that if the pigeon in question was dyed, it was for protection against hawks and other predators, according to Byrd's link - Dyeing live pigeons.

Without data, I would have guessed that any bright color might be a risk, and that the goal would be to dye the pigeons a darker color that would be more difficult to pick out against their background, ideally one with splotches or bars to break up their outline.

Considering the vivid bright hues of the hippy pigeon/parrot, seems a bit OTT though. Wouldn't it make its predators more likely to focus on it?

Pigeon keeping isn't something that's commonly done here in the US, but it's quite common in Europe. It is very likely to be a bird from a coop (easily handled by the owner) and perhaps a fairly valuable racing bird that's being let out for exercise or training.

Originally posted by nikelbeeConsidering the vivid bright hues of the hippy pigeon/parrot, seems a bit OTT though. Wouldn't it make its predators more likely to focus on it?

Perhaps not. The predator might not recognize it as edible prey.

We don't know if the method works, but there was some purpose (amusement, identification, protection) behind the color change.

Originally posted by Byrd
Pigeon keeping isn't something that's commonly done here in the US, but it's quite common in Europe. It is very likely to be a bird from a coop (easily handled by the owner) and perhaps a fairly valuable racing bird that's being let out for exercise or training.

You'd be unlikely to find one of these in, say, NYC.

Beter had a number of homing and racing pigeons, including expensive "fantail" show-offs, that he had entered in a number of interisland competitions. As a volunteer for the city Recreation Department at Easter events, Beter had temporarily dyed ducks and chicks. Would the same work on pigeons?

The result is Beter's "trade secret," but involves food coloring, a special diet and vitamins. We're talking pink, yellow, orange, green, purple, red, white and blue pigeons, and the colors are as bright as a fast-food wrapper.


Beter has homing pigeons that he dyes with food coloring and lets people borow them for special occasions like marriages, birthday parties, etc and charges them according to the number of birds they borrow.

If he can dye the birds to look convincingly alien and send them flying, there's got to be another person who does something similar, sends it flying to the public to baffle other people.

My opinion is that it's just food coloring done by a bored but exceptionally talented person.

posted on Jun, 11 2007 @ 12:57 AM
link
I did some additional searching on the topic of pigeon dyeing, and judging from the results (or rather lack thereof), it's not very common.

I did however find the following on a blog, in relation to Spain, where the mystery pigeon is from:


Around this time of year [November] in the Costa Blanca, you will see flocks of brightly coloured pigeons circling round, this is not just the whim of the owners to tart them up a bit, but they are painted in individual owners colour schemes to participate in a sport, not racing, but the sport of being amorous.
...


Source
(Visit the link to see an example of such a pigeon.)

I have two problems with this:
1. Our mystery pigeon's colours are so "random". Does each of this flock have exactly the same colorization to identify it to an owner?
2. Why not use the usual rings that is used to mark and identify birds?


A hand-painted pigeon is going to enjoy the flight for couple of hours. People here in Pakistan keep pigeons in cages as "domistictaed birds" and color their feathers. They free-up these pigeons for couple of hours twice every day and then they return to their cages by themselves.

Source
(With photograph of example pigeon...)

posted on Jun, 11 2007 @ 10:11 AM
link
Judging by the original picture, it must be a trying task to dye these birds. I note that the colored feathers are interlaced, which would seem to require putting the birds in some rather odd positions to accomplish. And would mean that you had to hold them in that position long enough for the dye to become dry and not rub off onto adjacent feathers.

No, I'm still not convinced enough to switch sides yet, I think 'fakery' is still involved. I just wonder at how this would be accomplished.

posted on Mar, 10 2014 @ 08:24 PM
link
The body shape and size look like the average feral pigeon. My immediate thought seeing the picture was dyed. The part I find interesting is that someone must be catching birds, or at least one, then applying dye and releasing them again. Maybe trying to 'beautify' the group a wild pigeons.

Samuala25
This is a Rose Crowned Fruit Dove

The birds are different. Now it would be cool if a parrot and a dove can mate and make rare cool doves :3

But since you brought that link up, it is also possible a normal pigon to mate with fruit pigeon, resulting a half breed.

Actuall who cares what kind of mix it is. If its real bird, it will sell a fortune. If i someone can make coloured doves, They will be used allot and worth lot of money.