Ontario Children Are Being Told To Flick Off

posted on Apr, 27 2007 @ 02:03 PM
link
A new campaign being launched in Canada to save energy is drawing criticism due to an intentional logo that looks a bit too suggestive.

Here you can see the Environment Minister standing in front of the new logo. 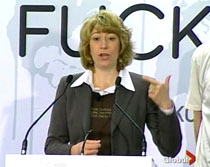 Opposition parties are blasting the Ontario government for supporting a campaign aimed at getting young people to cut energy use and suggestively titled "Flick Off."

Launched Wednesday by Environment Minister Laurel Broten and British billionaire Richard Branson, the tongue-in-cheek campaign alludes to a four-letter word and the logo uses a typeface that makes the capital letters "L" and "I" look like a "U."
www.cbc.ca...

I can understand that they're trying to reach out to young people, but I think they could have chosen a logo that wouldn't draw as much ire.
That may have been the intention though, it's certainly giving the new campaign a lot of free publicity.

Here's a link to the Flick Off main page.
flickoff.org...

What do you think of the new logo ???

Anything for the cause ?

posted on Apr, 27 2007 @ 02:13 PM
link
Looks like they knew exactly what they were doing right down to the camera angle used in the press conference. I think it will be popular.

posted on Apr, 27 2007 @ 02:18 PM
link
Hey, the provincial Liberals have been tellin us that ever since they were first elected. We call them the "Fiberals". The Tories may be evil, but the Ontario Liberals are merely bums. Flick them!

posted on Apr, 27 2007 @ 04:10 PM
link
Thanks Anxiety Disorder for the "Icing on the cake of my day". LMFAO.Really was this intentional or are they just that brainless?Totally hilarious.

Originally posted by AccessDenied
Really was this intentional or are they just that brainless?Totally hilarious.

The Logo and campaign is very intentional, just look at the first thing that shows up when the flash loads at this link.
flickoff.org...

We Only Have 10 Years To Dramatically Reduce Our Emissions
Or We're Screwed.......

There is no mistaking the intent.


Good idea though, people will look at it and show others saying "Hey, look at this logo" and it will get spread. Hopefully it makes a difference.

Originally posted by JohnnyCanuck
Hey, the provincial Liberals have been tellin us that ever since they were first elected. We call them the "Fiberals" The Tories may be evil, but the Ontario Liberals are merely bums. Flick them!

Don't forget Dalton McSTINTy! The Toronto sun had fun with him regarding the - over 250? campaign promises - that he failed (each and every one miserably) to reconcile with?

To FLICK or not to Flick...THAT is the question!

How do I insert an "UP YOUR's emoticon in this line, regarding the fiberals?"

posted on Apr, 27 2007 @ 05:51 PM
link
You are correct there is no mistaking the context of their site.Unfortunately, and I know I'm gonna get shot down over this but I believe we are scr**ed anyway. Not to get off the topic of this thread but I don't subscribe to the Al Gore theory.It's Ok to conserve energy but I believe Global warming is occuring as a natural phenomenon and has little if anything to do with modern man.That is just my opinion.

Originally posted by AccessDenied
I don't subscribe to the Al Gore theory.It's Ok to conserve energy but I believe Global warming is occuring as a natural phenomenon and has little if anything to do with modern man.

Yeah, I'm not jumping on Al Gore's bandwagon either, I think he's just found a cause to hang on to that will keep him in the public eye.
I do think humanity has some responsibility for the current condition of the planet, but not to the extent Gore likes to promote.

This new campaign may make a small difference in our energy usage if it doesn't get trashed before it gets going, but turning off my kitchen light really won't make much of a difference.

The thing that gets me is that "Flick Off" is aimed at children.
Is this the only way we can get their attention

posted on Apr, 27 2007 @ 06:37 PM
link
One of Dalton's great ideas is to equip homes with 'smart meters', that will charge you for your electricity based upon the time of day, and draw upon the grid...etc, etc. However, figures I've read say that consumer usage amounts to a mere 10% of total power consumed. The other 90% is industrial.

Basically, he's creating a dog and pony show that will only affect one/tenth of the issue, and the big boys don't have to play with the rest of us. And it's too darn expensive to put scrubbers on the coal plants he promised to close, anyway. I swear, there are days I regret my visceral hatred of the Conservative party.

But all in a polite Canadian manner, of course. What do they say one province over? Tabernouche? Indeed!

Ontario students at Scarborough school went to great lengths to divert more than 12,000 toxic batteries from entering a land-fill site.

The city told them to "Flick Off", they wouldn't recycle or properly dispose of the batteries.

They wanted to help save the environment "one battery at a time."

But about 500 Grade 7 and 8 students in Scarborough who collected more than 12,000 batteries had their enthusiasm drained after the City of Toronto refused to pick them up.

"I was pretty disappointed because I thought they'd be very impressed that we collected so many and try to help us out," said Wardah Anwer, 12, part of the environmental club at Bliss Carman Senior Public School, in the Kingston and Markham Rds. area.
www.thestar.com...

Anyone wanna bet they'll get some action now that the story made the paper ?

When alerted to the students' predicament, Councillor Glenn De Baeremaeker, chair of the public works committee, said he would go to the school to personally thank them. The mistake won't happen again, he added.

"I will be talking with staff first thing in the morning about how can we incorporate this into our Toxics Taxi program," said De Baeremaeker (Ward 38, Scarborough Centre). "I feel terrible for these kids. They're trying to do the right thing and we adults are letting them down a little bit."

It seems our political servants only serve us when something makes them look bad, or it's convenient. :shk:

posted on Apr, 27 2007 @ 07:01 PM
link
Truth is, De Baeremaeker plainly said that some staffer was following the rules a little too closely. The City, in turn, is offering the class $250 towards their club. This is just a story of a civil servant that didn't have the smarts or the gumption, or both, to run this one upstairs.

Toronto, in turn, is trying to exceed Kyoto standards, while the Feds can't even be shamed into meeting them. Damn...more Tories...

posted on Apr, 27 2007 @ 07:16 PM
link
I'm putting $10.00 into an envelope right now to send to their Environmental Club. It may not be much, but if a few more people help them out, who knows what they might accomplish.
At the very least, we should be able to match the measly $250 that the Province is giving them.

Our children are our future, the least we can do is support them when they need it.

I'm putting $10.00 into an envelope right now to send to their Environmental Club. It may not be much, but if a few more people help them out, who knows what they might accomplish.

That's a damn fine idea, and I'll do the same. My suggestion? Add ATS to the memo line of the cheque. Maybe they can track how many of us tin-hatters contribute. Good show, anxietydisorder!

Originally posted by JohnnyCanuck
Add ATS to the memo line of the cheque. Maybe they can track how many of us tin-hatters contribute. Good show, anxietydisorder!

Good idea, I'll write "From a member of abovetopsecret.com" in the memo line.
I'm sure they'll appreciate the support, and it's a great plug for a site I consider a great resource for students interested in environmental topics.


I've enclosed a letter with my cheque:

To The Environmental Club At Bliss Carman,

I read your story about the batteries your school had collected and wanted to applaud your effort.

Every little bit helps, and I'm surprised you didn't receive more support for the effort the students made. Our Children Are Our Future.

I'm promoting this in my own small way, but I want the club to have this $10.00 to help you in your effort to save the planet.

Put the money to use as you best see fit.

Congratulations to all of you.


My letter and cheque will be in the mail first thing in the morning.

posted on Apr, 27 2007 @ 08:31 PM
link
Well, I appreciate the humor that might have been intended - but all and all I think that telling children to # off in a subliminal way that is condoned by authority is just another insult to their dignity, intelligence and the respect they deserve.

Just because they are young and society likes to think that perhaps because of that they are more freely able to express themselves with vulgarity - doesn't mean that the government and those in authority have to demonstrate the rather insipid suggestion that it is the best or only way to reach them.


Johnny Canuck said -
consumer usage amounts to a mere 10% of total power consumed. The other 90% is industrial.

So I would imagine it's the sentiment kids have towards these hypocritical and demeaning presentations. Not surprised at all that it's financed by a man who has coined the label 'virgin' and used very glamorous subliminal suggestions in his own ads suggesting that what is really desirable for children are empty headed images based on the appearance of wealth and possessions......

So all in all - I find it's a demeaning seduction, co-opting and preempting the very sentiments most concerned conservationists among the young feel about those who subsidize industrial waste with our tax money. Which makes it not only insulting, but diversionary, diverting their own responsibility and projecting their own degradation.

Originally posted by JohnnyCanuck
One of Dalton's great ideas is to equip homes with 'smart meters', that will charge you for your electricity based upon the time of day, and draw upon the grid...etc, etc. However, figures I've read say that consumer usage amounts to a mere 10% of total power consumed.

"Dalton can kiss me arse and like it" (Sorry...I appologize... favorite saying of mine)

This man has proven that he is a great fisherman.

He put all the right baits on his hook, and the general population snagged at it.