Savvy politics only lasts so long.

The Hawks, the politicans and the curropt leaders are starting to believe their own hype.

They are getting gready, they are getting sloppy, and the much needed investigations and critiques they managed to avoid through savy politics is starting to come undone.

World Bank president Paul Wolfowitz has confessed to errors over a pay scandal surrounding his girlfriend, and left his fate up to the global lender's national governors.

The former deputy US defence secretary, one of the architects of the war in Iraq, refused to say if he might have to resign as the bank's 24-member executive board investigates the controversy.

The controversy is a deep embarrassment for Mr Wolfowitz just as he battles to overcome scepticism about a campaign that he is waging against corruption in the 185-member World Bank's multi-billion-dollar lending.


Then, Gonzales fired those attorneys, against current laws, and now, he's be subpoenad

The subpoena, issued a week before Gonzales was scheduled to testify before Congress about the dismissals, seeks hundreds of documents either withheld or heavily blacked out by his department. The subpoena sets a Monday deadline for Gonzales to produce the documents.

"We have been patient in allowing the department to work through its concerns regarding the sensitive nature of some of these materials," House Judiciary Committee Chairman John Conyers, D-Mich., wrote Gonzales in a letter accompanying the subpoena. "Unfortunately, the department has not indicated any meaningful willingness to find a way to meet our legitimate needs."

WASHINGTON -- President Bush, his trip to Latin America disrupted by a firestorm over the dismissal of eight federal prosecutors, said Wednesday he is "not happy" with the Justice Department's public explanation of the firings and added that Atty. Gen. Alberto Gonzales has "got work to do" to repair relations with Capitol Hill.

Sorry George, who's in control of your house of white?
www.chicagotribune.com...

Then there's the external email accounts.
This is a hum dinger,
If you dont want things kept on public record about crimes your break purposley, you use means which they wouldnt be recorded. ITs basic 'break the law 101'

WASHINGTON (CNN) -- The White House is being accused of improperly trying to hide e-mails about government business by using unofficial e-mail accounts.

Congressional investigators say they found communications on one account from top White House aides about official matters, like the December firings of eight U.S. attorneys.

Those e-mails were discovered on a Republican National Committee e-mail domain called gwb43.com. That domain is not part of the official White House communication system.

The Presidential Records Act, passed during the Nixon administration, requires the preservation of all official records of and about the president.


The whitehouse claims, all emails have been lost, thats convenient...

The White House's claim that e-mails sent on a Republican Party account might have been lost was challenged Thursday by Senate Judiciary Committee Chairman Patrick Leahy, who quipped that even his teenage neighbor could find them.

"They say they have not been preserved. I don't believe that!" Leahy shouted from the Senate floor as the dispute over the firing of federal prosecutors continued at a high pitch.

"You can't erase e-mails, not today. They've gone through too many servers," said Leahy, D-Vt. "Those e-mails are there, they just don't want to produce them. We'll subpoena them if necessary."

I, being an IT professional, agree. Nowadays in IT, its hard for information / emails to be lost. Why is it the CIA Can track and record everything, but these emails just happen to be untrackable. 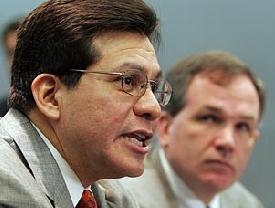 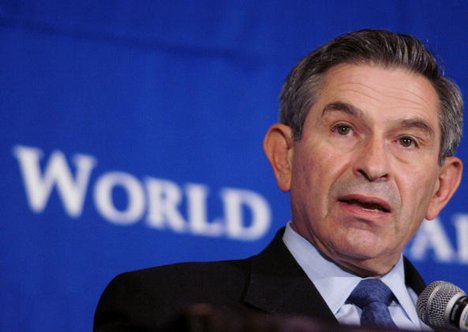 TAKE A look at the above, thes two men are the beginings of the end.

The emails were sent outside of whitehouse channels, simply because they werent 'requests, desires or orders' that the whitehouse wanted on record.
Deniability is the word.

The Attorneys were fired because it was known how they would vote/act in regards to something specific this administration wanted, even though they knew it wasnt nessecary or legal.

and as for Wolfowitz, well the Neocons havent changed a beat.
He got plain greedy, and now The key man on the world bank organistaion might of thrown a spanner in the works, simply for his own personal greed.


Evil never triumphs, Good always prevails. And this administration is starting to fall apart at the seems

posted on Apr, 12 2007 @ 10:12 PM
link
Soooo the E-mail were lost, it seems that in each and every administration either secret documents get lost or E-mails disappear.

So much for Clinton and the missing documents.

People needs to give a gooood loook to who govern our nation . . . nothing than corrupted elite that careless about the people of this nation but rather making corrupted money for their benefits.

I always knew that corrupted governments rob their nation and the people blind, but that was only in third word countries with dictatorships.

Lets see the new face of corrupted politicians with greedy hands in democratic nations like ours.

And people still worship this politicians . . .

The entire time to the public we've heard 'stay the course' 'evidence was legit ' all that crap.. but behind the closed doors they could of been saying the complete opposite.

Regardless of wether this government HAS or HASNT directly manupulated the public.

I feel that being there is the 'possibility' they have, with all the strange happenings, it should warrent and investigate to either prove or dissprove the claims.

The have had the opportunity, and they have had the motivation. Unfortunately, when your tempted with such abilities, your word saying you havent, isnt good enough in my opinion.

And that goes for EVERYONE and EVERYTHING, not jsut this admin.

If I had the opportunity to manipulate my workpayroll system, and somehow major mistakes 'occured' which happened to give me increased pay cheques, simply because I have the 'ability' too means id be investigated....

Imus is gone and we are still in a war and still our economy is hanging on a thread.

Washington is still spinning and is a lot of more stuff coming out into the light about the corruption in this government.

But as usual a good scandal is more important.

While Gonzales is still been questioned in congress.