NY Times (and Scientists) tell Gore to Cool the Hype

posted on Mar, 13 2007 @ 02:45 AM
link
None other than that most liberal of U.S. newspapers, the New York Times, has printed an editorial in their science section. This article quotes leading scientists in a call for Gore to cut the hype and correct the inaccuracies in the global warming story he has been preaching. Remember tha the NY Times has rarely found a liberal or liberal cause that it couldn't support, so this is damning criticism for them to call Gore on the carpet like this.

Hollywood has a thing for Al Gore and his three-alarm film on global warming, “An Inconvenient Truth,” which won an Academy Award for best documentary. So do many environmentalists, who praise him as a visionary, and many scientists, who laud him for raising public awareness of climate change.

But part of his scientific audience is uneasy. In talks, articles and blog entries that have appeared since his film and accompanying book came out last year, these scientists argue that some of Mr. Gore’s central points are exaggerated and erroneous. They are alarmed, some say, at what they call his alarmism

Now, this is exactly what many of us against the global warming hype here on ATS have been saying as well. Yes, it may be getting warmer. But where's the real proof that mankind is the sole cause?

Turns out that more and more scientists - and now even the New York Times - are saying that Gore has fabricated the data and the hype.

Too bad that so many have been duped into helping Gore support his still lavish lifestyle, while he tells the rest of us to severely conserve.

The picture in the article showing Gore standing in front of what is supposedly a picture of Hurricane Katrina ... 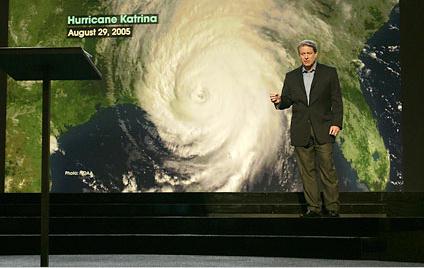 I think that is really satellite photo of the whirlpool created by all the money, food, energy and other natural resources being sucked into Gore's personal residence in the southeastern U.S.

Gore's version of Jerry Falwell's old PTL (as in "pass the loot") Club.

pollution is manmade that does not equal global warming

the ash from the volcano lingerd in the atmosphere for years. now you could look at this from a few perspectives. most notably the ash in the atmosphere prevented the cooling to take place when all heat is supposed to escape back out to space, causing it to be warmer at nite. or that the ash didnot allow as much sunlight to penetrate the earth's surface causing temperatures to cool. well what happened? the net result was a period when the temperature cooled 1.2 degrees globally.

what is my point? well did anyone stop to think that pollution (which is bad for the enviornment of course) is actually slowing down global warming (or our solar sytems warning) and that without the added crap in the air we would have been a degree or two warmer actually then we have? is this a fact? or course not/ but then again the whole idea is to make people feel responsible and then to lay the ground work for people believing that our food and water supply are in jeporady (and give an elite few an opp. to take over and profit off of issues of national security) and it will need to be rationed out, see maybe the ptb figured not enough people cared enough about the enviornment to gain the socially popular idea to change legislature in the future just based on damage to ecosystems so maybe we can get them to believe there million dollar homes may be flooded, and that awful diseases will be created from this "global warming" and this will be enough for our legislation.

the incoveniant truth may be that the PTB latched on to enviornmentalist fighting a just cause over pollution and knew they (the enviornmentalists) would take the bait on global warming) and these emotionally driven people would help them back an idea that could get more people's attention and past legistlation that would help them gain power and control in the future.

could gore just be a smart manipulative schmuck playing on the emotions of those with good intentions. of course not he is a politician. and he's a victim of the most unfair election in history, this must make him very trustworthy

posted on Mar, 13 2007 @ 10:44 PM
link
Sure he's alarmist, but its in direct proportion to all that faulty data the oil companies have compiled that there is no warming what so ever.

So there you go, you have one side saying there is no problem and another side playing it up for all its worth.

So I call it relatively even. This is Gore taking a swipe at Bush's oil friends.

If there is global warming, it could all be due to orbital changes of the earth, and there isn't a thing we can do about that, period.


A panel of scientists has presented the United Nations a detailed plan for combating climate change. VOA's correspondent at the U.N. Peter Heinlein reports the strategy involves reaching a global agreement on a temperature ceiling.

Well, if Gore doesn't at least stop "global warming", he might just be succeeding in getting a UN Global Tax.

The NYT isn't telling Gore to do anything. The article is merely highlighting some of the opposing views on the subject.