In short, my platform is simple:
a circuler goverment that isnt binded by religon when it comes to the rights of the people. people shouldnt be oppressed by what others believe is moraly right or wronge

To expand:
a new goverment for the people by the people

sort out the countries homeless

sort out the corruption


As a candidate for this office, running on this website, I promise the following:

I will uphold the Terms & Conditions of AboveTopSecret.com at all times

I will conduct a campaign that focuses on issues

I will not, through my actions, communicate libelous or slanderous statements or advertising messages directed toward other candidates in the primaries or general election

I will not, through my inaction, allow libelous or slanderous statements or advertising messages directed toward other candidates to be made on my behalf

If selected in a primary election, I will accept the nomination to run for my party for The President of The United States and select a capable running mate for my Vice President

I understand that if I fail to live up to the higher standards described herein, I may voluntarily or forcibly be required to end my candidacy or Presidency if elected.

Israel and Palestine have been at it for decades with Israel caging in the Palestine with a berlins wall.

If a two state solution isn’t plausible we take the proposal by the Arabs and recognise Palestine as a country and have Israel back to the 1967 boarders where Israel is fully recognised by all Muslim countries and has a security pact with its neighbours.

proposal made by king Abdullah

China is a growing superpower and it has billions of US dollars in reserve.
It’s a sleeping dragon waiting to be woken so we will have to work closely with china and make sure they are reliant on exports from us as we are on them.

When it comes to Taiwan only 20% want to separate from china, I say we offer china Taiwan in return they step down their support for North Korea. And be more open when it comes to their market.

The US and Iran were close in mending relations before bush declared them a terrorist state.
I propose we open full dialect with Iran and let bygones be bygones and work out our differences.

By befriending Iran we can truly make a good foe a friend. And secure some natural resources and get help with Iraq

Iraq is a mess and we need its neighbours more then ever
By getting them to help out not only will it help us but them as it will ensure that their boarders are secure.
And a full Iraq meltdown isn’t in the best interest of none of its neighbours. 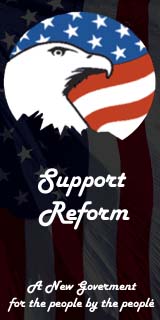 So what about the special relationship with the UK?

How to repair relationships with Europe. Who is giving the US most support in Iraq. The UK, yet you seem to forget to address the most important country supporting the US today.

I am asking most of the candidates this, and I look forward to what you have to say. Very simple, yet very efficient.

In one sentence, Why should I vote for you?

one of the only countries that can truely be said to be a friend and ally to the US always ready to help.
i propose strengthen ties further in diffrent fields (even so its very strong already)


chissler the reason you would vote for me is because i am good looking
and if thats not enough because i will say things as they are and what truely needs to be done.
no BS straight to the point

to show i am back

Religion in Schools and public Places


My stance on the Legal system

SHOW YOUR SUPPORT
use one of these avatars

Do you support scarping the Electoral College and the US becoming a representative democracy ?


My first Podcast on be being a candidate


this is a opening podcast for my political campaign on ATS


Great stuff - really enjoyed the podcast, although I had to d/l quicktime, which I don't like lol

You're really on the ball mate - fair play to you