Birds, bees, frogs, and fish. All dying. Anyone else worried?


Birds in the thousands falling dead from the sky?


Is anyone else worried?

I had been keeping tabs on the frogs, that was worrysome, but the birds, bees, and fish, this is not a good thing. I think it's for the most part going
unknowtised. It needs to come together as a whole. They are the start of the food chain, when something starts to hurt nature at that level, we can not be far behind.

I personally am with the pole shifting theory. I think that is what is starting to happen.

I think changes like this probably do affect nature on a cellular level that we can only begin to imagine. Have any studies been done on how a pole shift would affect animals?

I am some what concerned, I noticed this for many years now.

posted on Apr, 25 2007 @ 04:57 PM
link
i personally understand that the electon density of the air is being increased by the unique action of the chemtrails (barium and aluminum) combining with the sun light (uv light) which causes electronization of the particles which makes the AIR more CONDUCTIVE to energy manipulation. the air becomes so electon dense the air (which is a gas) becomes a plasma gas (when the electon density reaches a certain level) and then the frequency's pumped out by things like HAARP and GWEN get around much better cause of the increased conductivity. i'm not sure whta the half life is of the chemtrails aluminum and calcium but they spary the air daily and they are IMO messing with the ways animals naivage using the earth's natural energy's and this messing/experimenting/manipulating is reaching a critical level in the last year

Notice not only the birds and the bees seem a little lost, confused, wacky, outta touch with reality?

I am pretty certain all these cases are related with what has been happening to bees. It is also a fact that what is happening comes and goes as in the case of the bees in Idaho increasing their population and their production this year while last year there was a loss of bees and production.

posted on Apr, 25 2007 @ 10:00 PM
link
I followed your google link to this image of the millions of fish that turned up dead in the Colorado River and it is awe-inspiring. I'd just be waiting for the river of blood to appear next tbh. 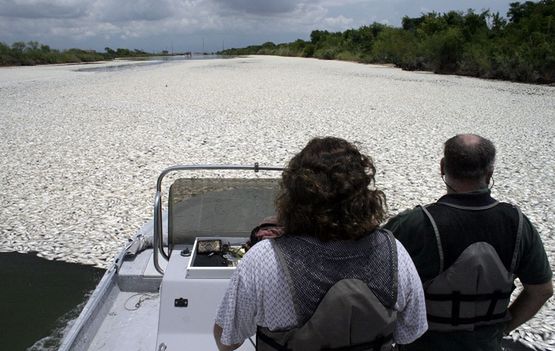 Originally posted by Stormdancer777
>I personally am with the pole shifting theory.

I am some what concerned, I noticed this for many years now.

I am pretty much in line with you, that a shifting or weakening magnetic field is to blame. That's my scientific excuse.

My spiritual excuse is that the planet is shaking all things off, in another mass exstinction, humans included, for a re-birth in a new age.. 6th mass extinction I believe. Though.. there still has to be a scientific explanation because all things abide the laws of nature.

posted on Apr, 25 2007 @ 10:16 PM
link
not only are all of these animals dying off but something is happening to our food supply as well. i think weve all heard the news talking about everything from our spinach to corn to peanut butter. i believe something this world is not ready for is about to happen. i have made my peace.

The entire solar system goes through these changes every once in a while, and there are other major changes that also have happened and left us a signature in the geological record which says these major extinctions happen every 62 million years. The last major extinction was 65 million years ago, so we are overdue for the next one.

We have been seeing that there are also climatic changes in other planets in the solar system and even in our sun. These changes are affecting our sun, and the Earth's magnetic field, which in turn is causing the problems with the frogs, the birds, the fish the bees ect.

As i said before, these events do not happen overnight, andyou can be certain that it will get worse before it gets better.

Anyways, the world is not going to end because this has happened many times in the past, but things will continue to change and a lot of people, the flora and also animals will be affected by these changes.

I also see that you are using a computer, hence using electricity 50% which is provided power through coal plants...

If you "feel so ashamed" of humans, I see that you are not ashamed to "use a computer" and do many things that other humans do, many of which are not good for the environment...

The problems that have been happening with the birds, frogs fish, bees ect all started happening at the same time... which points to a common cause...and it is not "humanity"...

These changes are not constant, sometimes the weakening is more pronounced than at other times.

Mankind has been around for less than 0.00000000001% of the time the Earth has existed. The Earth has survived and gone through hundreds of changes which have almost caused the extinctions of all animals and plant life on Earth several times.

There have been other changes within those major extinctions which have cause also many major changes on Earth...

Mankind will not destroy Earth, it is always good to try to help the environment, but the Earth is far more resilient than most environmentalists give it credit for...

For some reason there are people who want to dismiss these natural changes, which are happening not only on Earth and want to blame mankind... The Universe and Earth itself are controlled by powers which mankind can never even dream of controlling....end of story

Originally posted by Revelmonk
I followed your google link to this image of the millions of fish that turned up dead in the Colorado River and it is awe-inspiring. I'd just be waiting for the river of blood to appear next tbh.

Wow, that is an awesome picture,if it is real. Things are getting serious, people.

Wormwood, A third of the waters turned bitter.

The picture is something else, what's the date on it?

Anyways, the world is not going to end because this has happened many times in the past, but things will continue to change and a lot of people, the flora and also animals will be affected by these changes.


Well, technically, even if religious scripture is read correctly, one finds that your statement is true. For example, the bible is pretty clear that the world will be "forever." This whole "end of the world" theology is actually based on "the end of the age." The end of an age, and the end of a world are to diametrically different things.

The bible describes a big change in the world, not the end of it.

Wormwood, A third of the waters turned bitter.

The picture is something else, what's the date on it?


Stormdancer, most people say that wormwood was probably the Chernobyl explosion in the 1980s. It seems that some events in the bible have been written out of sequence. I don't know if it was done that way to purposefully confuse or not, but it certainly seems that has happened.

in which the heavens will pass away with a roar and the elements will be destroyed with intense heat, and the earth and its works will be burned up

A day is equal to an age.

This make me wonder
www.space.com...

Also, the increase in the activity of the sun may also play a major factor in all of this:

posted on Apr, 26 2007 @ 09:45 AM
link
I agree these events are worrisome. Is the end of the world or the age near that I don't know. What I do know is even if the end is nearing I will still plant my trees and flowers. I will still take care of my backyard and I will still enjoy the sun and the rain. I will still recycle and conserve as much as I can. I will still love God and my family. There really isn't much else I can do.