Unwrapping the US SSGN

While "Shock and Awe" and embedded reporters covering battles on live TV took all the headlines, a small detachment of US, UK, and Australian naval explosive experts deployed a new weapon unseen in Umm Qasr. Operation planners knew that in the first week of the conflict, the most important aspect of the strategy for taking Basra would be the ability to get the Sir Galahad into port to unload. Without the Sir Galahad, troops would be unable to support food, water, and other emergency logistical needs to the British military. The problem was the minefield in Umm Qasr, and the solution was the Remote Environmental Measurement Units Support (REMUS).

REMUS was the first in a line of unmanned underwater weapons being developed for the US Navy. The success of the REMUS has reshaped the US Navy, from the conversions of DDG-91 through DDG-96 to support UUVs, to the development of an entire new class of ships in the LCS, to the conversion of ballistic missile submarines into nuclear power guided missile and special operations submarines.

When the SSGN was first announced, a lot of noise was made about the amount of weapons that could potentially be carried. The Ohio SSBNs have 24 missile silo's. The two most forward SLBM tubes (i.e., those closest to the sail), also known as tubes 1 and 2, have been modified to hold a 5-man swimmer lock-in/lock out chamber. Missile silos 3-24 would be converted to utilize All-Up Round Canisters (MACs), which would replace 1 ballistic missile with 7 independently launch capable tomahawks.

The lock-out chambors were originally designed to carry Dry-Dock Shelters (DDS) or the Advanced Seal Delivery System (ASDS). The former can carry a single Swimmer Delivery Vehicle, capable of covertly delivering eight SEALs close to a beach; the latter is a small 55-ton submarine capable of delivering up to 16 SEALs close to shore. With the recent cancellation of the ASDS, it is almost a certainty that all SSGNs will deploy with Dry Dock Shelters to support the four, 8 man SOF units designed for standard SSGN deployments.

The DDS raises issues though. The DDS is a big add-on, so big in fact it covers tubes 1, 3, and 5 or tubes 2, 4, and 6. This means if 2 Dry Dock Shelters are deployed to a SSGN, tubes 3-6 will not be able to deploy weapons. To account for this, the Navy decided early on that tubes 3-10 will be given special attention to allow other storage besides MACs. With this in mind, it is slowly becoming clear that tubes 2-10 will have special storage, while 11 through 24 will carry weapons.

There is an old saying in the submarine community, "There are submarines, and there are targets."

During the cold war, the US Navy submarine fleet was expected to take out the submarine threat of the former Soviet Union, and was also the platform of choice for deep patrol into enemy waters to sink surface ships. This second role was actually the primary role of the submarine during WWII, with the silent service being the quiet reason why the US broke the back of Japan in the Pacific (the German U-Boats nearly did the same to the allies in the Atlantic). Since WWII however, only 2 submarines have engaged and sank surface ships, the Pakistani submarine PNS Hangor sank the INS Khukri, and the HMS Conqueror sank the Argentine cruiser General Belgrano.

What is often unspoken is the critical role of submarines during peacetime. The C4ISR capabilities of a modern submarine are unique in a large, stealthy, manned platform. SIGINT technology requires a lot of power, which has made the nuclear submarine ideal for C4ISR during peacetime. When the Navy started thinking about net-centric warfare with the SSGN, the concept of a system of systems networked to extend C4ISR reach and develop a larger spectrum of capabilities became a requirement. The SSGN has become the next evolution, or more accurately, a small revolution towards that theory.

General Dynamics realized early on that in order for a submarine to deploy and recover unmanned systems, a standard module would need to be designed to provide guidence to unmanned systems developers. The project led to the Universal Launch and Recovery Module (ULRM). The ULRM comes in two versions, one for torpedo tubes for deploying small UAVs on SSNs, and a larger version for deploying unmanned systems from the silos of a SSGN. 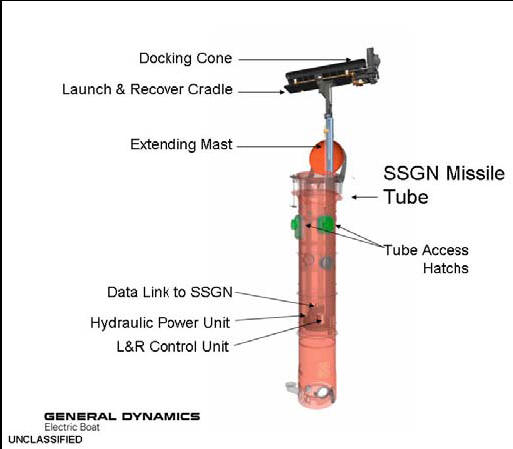 The concept is a docking cone that would extend out of the silo, pivot, and allow for horizonal deployment and recovery of unmanned systems.

The Net-centric concepts being developed by the US Navy involves a system of systems which would consist of large UUVs, small UUVs, and gliders. Large UUVs, like the Seahorse UUV would allow for large payloads in ASW, MIW, or ISR capability including towed sonar arrays. Smaller UUVs like the Bluefin would allow for autonomous UUV patrols for anything from underwater mapping of minefields to remote mobile sensor systems for detecting hostile forces. Additionally, gliders would be used for coordinating underwater communications between deployed UUVs and the SSGN. The SSGN will also carry stationary sensor systems roughly the size of 55 gallon shipping drums. 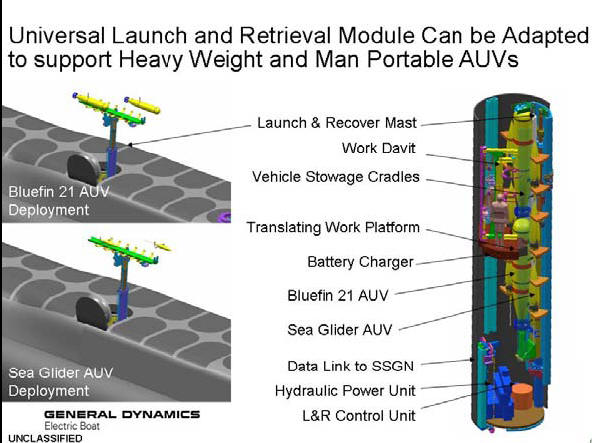 1 Silo can support either 1 SeaHorse UUVs, 6 Bluefin UUVs, 18 Seagliders, 1 X-Ray glider, up to 18 fixed position sensors, additional ammunition modules for SOF, additional SOF provisions and personal, or a MAC supporting the 7 Tomahawk arrangement. Additionally, with the development of the Littoral Warfare Weapon (LWW), AIM-9X Sidewinder or SM-6 variants can be deployed using SACS. 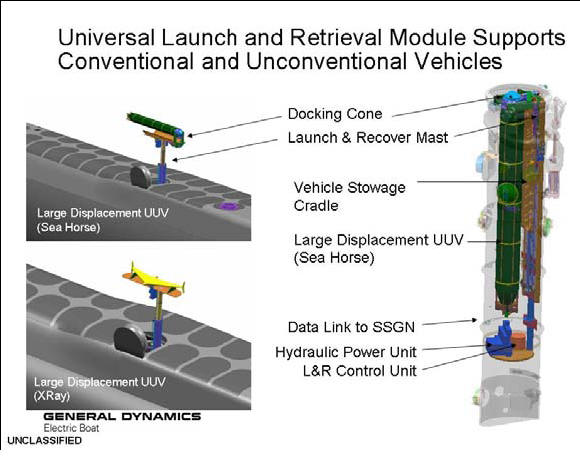 The UUV is changing underwater warfare. It has been said that unmanned vehicles will ultimately render the AIP submarine obsolete just as it becomes fielded in large numbers. While that is yet to be seen, the US Navy is betting on the mothership concept, and other countries are as well. The French SMX-22 concept is another example of underwater mothership theory in development.

posted on Sep, 26 2006 @ 12:01 AM
link
Intresting concept. Looks like the hydraulic power plant for working the translating machine ...is independent in the bottom of each tube. IT would have to be pressure sealed/hermetically sealed.

Each tube would have a system of valves for flooding and then draining too.

SSGN as Ballistic Defense Weapon. This project is fully funded through the MDA. The idea is to hit ballistic missiles while in stage 1 and stage 2, before they reach top speeds, and closer to the launch zone as opposed to the target zone.

SSGN Transformation Concept
One of the original articles from Fall 2001 of the SSGN concept.

Joint Forces Testing on the USS Alabama
While people assume the Navy SEALS will be the SOCOM unit of choice for the SSGN, Army Rangers, Delta Force, and Air Force SOF have all partisipated in exercises developing the Special Forces capabilities of the SSGN.

Electric Boat / General Dynamics Unclassified SSGN Data
As presented by the Applied Physics Laboratory, University of Washington, the whitepaper goes into detail of operational concepts including the underwater battle force, specific engineering regarding SSGN modifications, and UUV concepts including the PLUSNet concept.

CDR Robert Aronson, USN review of SSGN Operational Concept
One of the most concise and detailed analysis of future operational doctrine for the SSGN. This is a good read for anyone interested in underwater warfare.

Costs Revealed for the SSGN
Anyone who knows anything about the US Navy knows who Bob Work is. Bob quotes Eric Labs who recently reviewed US Navy shipbuilding costs for the congressional budget office, citing the cost of the first 4 SSGN converstions at 700 million per SSGN, 300 million of which is for nuclear refueling. Cost does not include new weapon systems, but does include modular payload systems. By far this makes the SSGN the most cost effective submarine project by the US Navy in decades.