The white buffalo is very important in many of the native American prophecies, and beliefs. It is said that when the brotherhood of man comes together this sign will be seen and the buffalo will change colours from white, to brown/black, to red then yellow then back to white again. This is meant to signify the four races that in ancient American Indian Philosophy were given by the creator four powers and colours, who were then scattered across the world, to reunite one day in the future.If however the "circle of man" is not completed then the creator will destroy all of the earth except the "Children of the Earth" who will repopulate the land after this event.


MILWAUKEE (AP) - September 16, 2006 - A farm in Wisconsin is quickly becoming hallowed ground for American Indians with the birth of its third white buffalo, an animal considered sacred by many tribes for its potential to bring good fortune and peace.

Thousands of people stopped by Heider's Janesville farm after the birth of the first white buffalo, a female named Miracle who died in 2004 at the age of 10. The second was born in 1996 but died after three days.

I think this one may signify due to recent events, and the last such buffalo having close links to sept 11th (see thread below) that we have to take in the west the traditional wisdom within and as believed by the Indians see this as time to

The birth of a white male buffalo means men need to take responsibility for their families and the future of the tribe, Hand said. 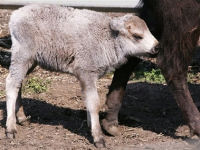 I find this intriguing and will be watching closely.

posted on Sep, 20 2006 @ 08:58 AM
link
The lakota people have an anciant story about 2000 years old that amongst other things the white buffalo of their time:


I believe this calf is very special for another reason, it was born just prior to the recent eclipse of the full moon in pisces and there is another eclipse on the solstice coming up, which is rare within itself.

this is interesting....i have heard about this story for a few years now. but there are other stories out there that are just as old. and if you bring those stories up there are people that say its all just a bunch of nonsense. and i belive you know which ones im talking about. they all connect tho...thats the interesting part of it. thanks for the linkage.

posted on Sep, 23 2006 @ 12:55 PM
link
Interesting... There seems to be alot of truth coming out lately... Is this a significant sign? .... With all the stuff with atlantis, all the new investigations about aliens... Maybe this is a sign to sa y we are movinng forward to something huge. I ve been feeling something strong coming for a couple months now... and now with this white buff... it makes it all more interested after readin about the native americans and what they have to say. Nice find

see a report at www.heraldstandard.com...

Lenape Indians, indigenous to the Fayette County area, from the Standing Stone Village, have offered three names to the zoo for the sacred animal.

(since i wasn't aware of any Lenape trib, here's a link: woodlandzoo.net...
that has a click link for a 'directions' map to the ZOO thats between Uniontown
and Farmington, Pa location)