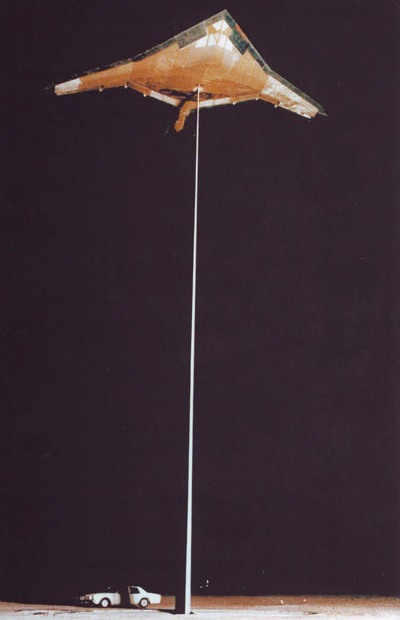 The above photo, as well as a plan view, can be seen in Mailes and Landis's "F-117 Nighthawk Stealth Fighter Photo Scrapbook", as well as some of the SENIOR PROM photos (and a whole mess of dead-cool HAVE BLUE inflight-breakup shots).

That image unveiled a while back that can currently be found on the web at Dreamland Resort? I'm thinking it was the ATA-B, and not in fact SENIOR PEG, as it is clearly a different, and smaller, aircraft. ATA-B was likely a jumping-off point for SENIOR PEG, but ultimately SENIOR PEG turned out to be quite different from what that particular image shows.

posted on Sep, 14 2006 @ 03:28 AM
link
This is quite coincidental. Just last week I was reading the chapter in Skunkworks by Ben Rich called "The Two Billion Dollar Bomber" about the B-2 program.

Throughout the book Rich doesnt really describe any of the craft he talks about. If I didnt already know what the Hopeless Diamond looked like I still wouldnt know. Yet Rich does describe Senior Peg (even though he doesnt mention that name for it). He says:


Northrop's design team and mine worked in total ignorance of what the other side was doing. But following basic laws of physics, they came up with strikingly similar designs -- a flying wing shape.

Now when I read this I remembered the DR Senior Peg picture and thought that it didnt really fit the bill. Yet it seems that the Senior Peg and B-2 designs were incredibly similar, Rich goes on to say.


I had absolutely no idea that we and Northrop were designing the same basic airplane shape until Gene Fubini, head of the Defense Science Board, came to visit me at the dek and gasped "How in hell did you get a model of the Northrop stealth bomber?"

Rich continues to describe how Lockheed weer actually designing a smaller plane than Northrop which resulted in some differences.


...it also created a few significant structural differences in the two models. Because [Lockheeds] airplane was designed to be smaller, the control surfaces on the wings were smaller, too, which meant [Lockheed] needed a small tail for added aerodynamic stability. Northrop had larger control surfaces and needed no tail at all.

I agree with you and I too think that the image on DR isnt accurate and infact Senior Peg was a much less faceted and more flying wing style aircraft. If you look at this thread on Senior Peg, you can see that apparently AWST released a photo of Senior peg yet I cant find it on the website anymore, it seems to have moved to a subscriber only area.

Very interesting design they had there, and it looks very very similar to that big UCAV they are trying out at the minute - minus the tails and the diamond wingtips (Good idea though, and I bet it looked good when made into its wind tunnel model!)

Any way, I do agree that they look very different to each other as you said SOC- one has a straight leading edge, the other a kinked leading edge. So which picture is the bomber project and which ones the recce aircraft?

Someone must have photos of the Senior Peg RCS model, Im betting Ben Rich has a couple, but either they are not giving them up or they are still classified for one reason or another.

posted on Sep, 14 2006 @ 10:55 AM
link
Just suprises me that its wing plan all bar the wing tips is almost identical to that big UCAV that they are working on.

All those years ago and it gets to fly in the 20th century as a ucav...cool.

posted on Sep, 14 2006 @ 05:36 PM
link
The photo I posted is SENIOR PEG; the photo at Dreamland Resort and published in AW&ST is more likely the ATA-B. That second photo looks a lot more like the F-117A, but larger. Well, that was precisely what the ATA-B was: a larger derivative of HAVE BLUE, designed for more range with a larger payload. The USAF went for the less risky ATA-A, which became the SENIOR TREND F-117A.

Is the book a good read? 'cause im off on a long haul flight soon and want a good book to settle into -

Any how, cheers again for the pic and info

posted on Sep, 14 2006 @ 06:05 PM
link
There's not much in the way of text to the book. There's a brief history of the XST and SENIOR TREND programs, but the majority of the book is photographs. It's worth a look though, there's a lot of great stuff in there that I've never seen released before. Most of it is full color, there's even full color versions of some photos I'd only seen in black and white before (like the palm readers at Tonopah). Now, Landis has been involved with some of these photo scrapbooks before, they're kinda like a companion series to the big hardcovers on the B-36 Peacemaker and the X-15. I'm hoping this means two things: one, a photo scrapbook on the XB-70 is coming (the gigantoid book is AWESOME), and a gigantoid book on the F-117 is also in the pipe!

Now, if you want an actual, serious reading experience, and you don't mind some tech speak, check out Aronstein and Picirillo's "HAVE BLUE and the F-117A". That's an outstanding history of the entire program (although SENIOR PROM and SENIOR PEG are not mentioned). They cover a whole lot of ground, and even mention an F-117A/AIM-9 study. Has to be the most intricate look at the program I've found yet, and I have an asinine library (the majority of which is on Russian systems or high-tech stuff coming from Lockheed). That one will run you around $60 (if you can find it), the photo book should run around $11 if you buy it on the interweb (got mine via Borders/Amazon).

posted on Sep, 15 2006 @ 03:22 AM
link
My only problem with calling this image the ATA-B is that it was slated to have four engines, then in preliminary research it was determined that it would need six to have the range and payload requested by the AF.

Now the DR image doesnt seem to have any engines, never mind four or six. If you look at this photo of an F-117A you can see very visible bulges for the engines which are not shown on the DR resort image.

Does anyone actually know the source of the DR picture?