Welcome to the S.B.O.M.R Project (Secret Bases On Moon Research) Project.
First of all would like to welcome the team:
SemperFortis
AnxietyDisorder, ADVISOR selected Acting TL
Dgtempe

I apologise for keeping you guys waiting but now the project is launched officially!!

Secondly I would like to just remind you all how important being a scholar is, it requires commitment and team work.
You must read everything in the thread and take it all in as well as participate on a constant basis.
Most importantly though it requires as I said before Commitment

Ok I would just like to see if my team are here so if you could just post that you are here and ready to participate and then we will get started on this interesting and verr fascinating research project.

posted on Jun, 19 2006 @ 07:59 AM
link
I'm ready to start if you lay out a purpose and some goals as to the direction you want this to go. This should be an interesting project.

I've been attempting to get good satelite images of the Apollo landing sites but they are all very dark and poor quality. Thanks NASA........

So let's get started and see where this takes us.

Its good to see you all.
and welcome.

Okay well , Basicly i want to find out if there up there or what the probability is of them being up there , i think that is the goal .
If any of u would like to throw something in at anytime like suggestions or comments then i strongly encourage you to do so

Ok i think thats it has anyone got anything to add or comment on??

posted on Jun, 19 2006 @ 02:18 PM
link
I figured that was where you were going, so i have started collecting as many higher quality pictures of the moon as I can find.

I'm just guessing that we can always go through the history, but any chance of actual "Proof" is going to come from either pictures or valid interviews.

Am I at least on track as to what your after?

If so, where do we post the pictures? I have been working pretty hard on eliminating any that look photoshopped.

Also, If I do not answer for a day or so, My particular position takes me away at times. So please forgive me in advance.

Yup, No worries Semperfortis, i understand .
Um post the pics here in this forum ,
they would be good in here so everyone can have a look at them and cross reference them with found data.

You are on the right track semperfortis,
I thank you for being prepared for this research project.

OK, I should have a short day tomorrow, so I'll begin putting them up without edit of any kind. That way we will all be looking at the raw photos.

I am also trying to get in touch with a college friend that has ties to the observatory at WVU, maybe I can get some REALLY good shots. Wish me luck.


That would be awsome!!!
LOL semper, your not the only one thats excited. lol.
We only await the other team members responses about what they think about the goal i have set .

But if u r ready to post your more then welcome to mate
That would be an awsome intoduction for the project.
So your more then welcome as i said man .
cant wait to see what you have found !
I recently just got some cool software for these things so they would be awsome to .
I will post my findings in here aswell.
Oh and by the way Good Luck mate ! his thoughts would be interesting.

There are what appears to be many different sections in these pictures that warrant closer inspection.

Semperfortis those are great pics mate
Did u notice the strange track like marks in the first picture??
If so do u have any idea as to what they might be?
They seem to be going through the crater and when i think about it , if there was impact in that spot then there shouldnt be any marks in the crater what soever.
It is strange though how the tracks seem to travell through the crater like that.
This is just an observation.
What do u think about this??

Does anyone else have any thoughts on these pictures???

posted on Jun, 20 2006 @ 01:52 PM
link
I've started looking at what others claim to be pyramid structures on the Lunar surface.
This image from NASA is near the crater Pythagoras. 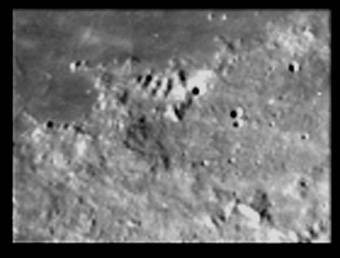 A claim made at holloworbs.com states.


Below is a picture of pyramids on the border of the lunar crater Pythagoras. There is a certain order to their arrangement. There is a similar grouping of pyramids, also exhibiting arrangement, in the crater Aristillus. A lone mount, called Monte Pico, exists in northern Mare Imbrium; Monte Pico is interesting because it is 2 miles high and as much as 18 miles long, also because of its pyramidal shape.

I've pulled up more recent views of the area from the Clementine mission. 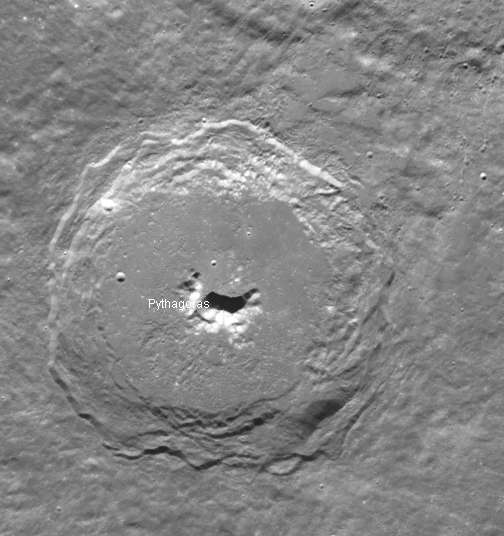 And though I've examined the crater at high resolution and from every angle, I don't see this feature that is claimed to be pyramids.

I looked up the original Apollo image from NASA (AS11-38-5564) and it really doesn't look like the same area that holloworbs claims to be Pythagoras. 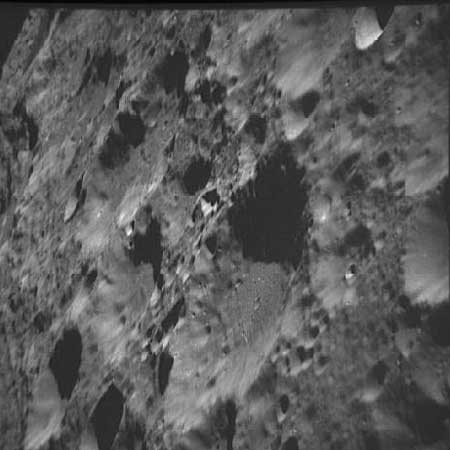 I'll let you guys look over the images and see if you can spot anything I'm missing.
And I'll continue to look up other areas that are supposed to have structures.

Edit: Is there some way that the large image of the entire moon could be resized to better fit the page ? It's made the page too wide.........

Please make him feel welcome as i am confident that he will be very usefull to us and our cause.

posted on Jun, 20 2006 @ 02:59 PM
link
Greetings everyone,
I am pleased to be aboard this fine research team. I am very much looking forward to contributing all I can to further our research. I'm positive if we work hard enough we will have some major findings. Never hesitate to let me know if you need anything, and I'll do the same.

Now if there is no "real" atmosphere, there should be nothing to cause rocks, or other space debris to move around. Correct?
If they are impacts, how did they impact just in the crater and in the directions they are going?

There are some very fascinating images from Clementine. What is even more fascinating is that the one the author raves the most about, is longer available. HMMMMM

Being as these pictures reside on Military servers, this gets even more strange.

The author states that Clem took 1.8 Million images, 170,000 were released to the public, the rest were "CLASSIFIED". Now I will ask the same question the author asked.... Why are pictures of the moon classified???????

This is well worth the read and I have no reason to disbelieve the author.

I'm going to the book store and get what reference materials I can, so I will have more for later.

Semperfortis, they are both really good reads
I see you point about the tracks, they are really odd, allmost like some machine did them or something?

And i have looked at the site about the clementine missions and i found this picture to be very interesting indeed.


Does anyone notice that square structure?
It seems to be equallatarilly square, i dont know if this is possible on the moon by natureal occurance so if someone knows please feel free to point this out.
Also what are those lines that seem to be going down the moons surface at equall spaces?? intriguing.

PS. i wonder where all the other team members are???

posted on Jun, 20 2006 @ 10:21 PM
link
Omega,
The square spot is the part of the pic, that was "Blurred" by NASA, prior to being release. Or that is what is alleged. As to what they smudged out, at this point your guess is as good as mine. What could they possibly not want the public to see that is on the moon. This gets more curious as I dig deeper.

I believe the vertical lines are a result of the way that Clemantine took the photos. It was a layering type of camera, I believe.

As for the tracks, they definitely do not look like an kind of a natural occurrence to me. There are a couple of excellent reference books out there on the Clemmy mission. I will have a lot more in a day or so, after a trip to Barnes and Noble. (Love that place)

posted on Jun, 21 2006 @ 07:46 AM
link
Alright here we go. I don't have any images small enough to upload so I'll just post the links. Also, I looked over some of those other picures and can't really make a personal judgement on them. I'd like to think there is really something there but most of them just appear to be poor photoshop jobs. A few of them however I think we may be on to something. Heres the first one...

On the above picture there are several things to note. They are lettered and pointed to. The ones to especially note are labeled C, and down by D. The two at C appear to be some sort of structure (bunkers or housing?) Down by D is another that looks interesting. It's hard to tell if it's just some sort of crater or perhaps a larg tower of some kind. Interesting.

I'm not really sure what to make of this one. The arrow is pointing to something there. It's hard to tell what because it appears bright. For this reason I'm not sure if what we're seeing is some sort of structure or perhaps a comet, meteor, etc. Let me know what you think.

Thats all I've got for now, I do most of my work here during my work (job) so I keep up the best I can.