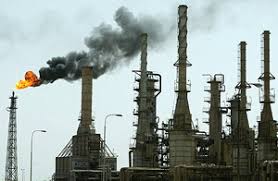 An environmental disaster is brewing in the heartland of Iraq's northern Sunni-led insurgency, where Iraqi officials say that in a desperate move to dispose of millions of barrels of an oil refinery byproduct called "black oil," the government pumped it into open mountain valleys and leaky reservoirs next to the Tigris River and set it on fire.

The resulting huge black bogs are threatening the river and the precious groundwater in the area. The suffocating plumes of smoke are carried as far as 65 kilometers, or 40 miles, downwind to Tikrit, the provincial capital that formed Saddam Hussein's base of power.

An Iraqi environmental engineer who has visited the area described it as a kind of black swampland consisting of oil-saturated terrain and large standing pools of oil stretching across several mountain valleys. The clouds of smoke, said the engineer, Ayad Younis, "were so heavy that they obstructed breathing and visibility in the area and represent a serious environmental danger."


If, and when, peace comes to Iraq, it appears the people will struggle still for generations to come. :shk: