Is It Raining Aliens? 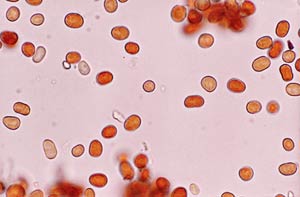 I can't find any previous posts on this "red rain of cells" anywhere on ATS.
Please have a look at the story and tell me what you think of this.

Apparently these cells contain no DNA but still reproduce.


Life as we know it must contain DNA, or it’s not life

Whatever it turns out to be we will need to reconceptualize the limits of life.

Home Page of Dr. Godfrey Louis
Mystery of the scarlet rains and other tales
The red rain phenomenon of Kerala and its possible extraterrestrial origin

posted on May, 28 2006 @ 07:13 PM
link
That is a fascinating article. I hadn't heard of this before. I wonder what those things can be... It would seem to me more likely that they are alien lifeforms rather than the leftovers of a flock of bats that got hit by a meteor! LOL I guess that explains the Kentucky Meat Shower.

posted on May, 28 2006 @ 07:16 PM
link
Amazing, this event happened 5 years ago, and scientists still haven't determined precisely the nature of the cells in the "Red Rain". (Let's hope they're not a Biohazard!)

It seems that latest news on this found here: From the 31 March 2006 issue of New Scientist: Red rain puzzle is still up in the air

It is looking increasingly unlikely that the red particles in rain that fell over southern India in 2001 are alien microbes, but their identity remains a mystery

Unfortunately, I don't have a subscription to New Scientist, so I can't get the full text of the article.

posted on May, 28 2006 @ 08:44 PM
link
I can't believe I have never heard about this before. To this day they still can't identify it? Pretty crazy. I'm guessing that whatever it is, it came from space...

posted on May, 28 2006 @ 09:05 PM
link
This is fascinating in that it seems so anomalous and its also the first time Scientific Community has been able to get samples and study this phenomena.

Charles Fort ( 1874- 1932 ) had documented occurrences of "Red Rain" as early as the mid to late 1800's in contemporary newspaper reports and accounts.

Here is a link to one of his books ( On-line) that documents newspaper accounts of this phenomena.

posted on May, 28 2006 @ 09:10 PM
link
Perhaps theres microbial life up in the atmosphere. Its comepletely possible, in fact if I recall thats one of the theories for how influenza appears.

posted on May, 29 2006 @ 09:44 AM
link
Scientists at Cardiff University say they can confirm that DNA, the genetic blueprint for life, did exist in the mysterious red rain which fell over India in 2001.This may be a key to learning about possible lifeforms in outer space.

But if no known DNA from Earth matches, the only remaining possibility would be that it is an alien life form from outer space.

Our genetic cousins are everywhere in the universe and all that happened on the Earth is that these bits and pieces of genes got together and made the entire spectrum of life that we see here on our planet.

Kerala’s red rain could yet provide conclusive evidence that the theory of panspermia is not only possible, but almost certainly was the way life started on Earth, 4 billion years ago.

posted on May, 29 2006 @ 11:33 AM
link
The article says that the particles/microbes have NO DNA, dosnt say anything about matching them. Also interesting si the fact that they still reproduce/multply in water tempratures at 600 F. Creepy and great thing, but reminds me a bit to much of the andrmoeda strain.

Originally posted by Xenophobe
It seems that latest news on this found here: From the 31 March 2006 issue of New Scientist: Red rain puzzle is still up in the air

posted on May, 29 2006 @ 11:59 AM
link
i wonder if they have tried any experiments on it... lets say introducing human blood or other DNA Samples, maybe even putting bacteria or other microbes to see how they react.


Originally posted by Xenophobe
It seems that latest news on this found here: From the 31 March 2006 issue of New Scientist: Red rain puzzle is still up in the air


Hehehe... Good thinking there, but New Scientist is a very reputable science magazine, I doubt that they would want to risk their reputation.


New Scientist is a very reputable science magazine, I doubt that they would want to risk their reputation.


It's a very reputable British magazine. April Fool jokes are an ancient Fleet Street tradition -- as shown by this piece in the Science & Technology section of the 30 April 2006 issue of The Economist, a magazine at least as reputable (it was founded in 1843) as the New Scientist. You'll need a subscription to view the whole article (which I read in the print version when it came out), but even non-subbers can see that the first two words of the piece, supposedly the name of a genetic researcher, are actually an anagram for April Fool.

In a gentle, straight-faced but unmistakably British way, you've been had.

posted on May, 29 2006 @ 10:04 PM
link
My guess would be that it is some sort of frozen unknow bacteria or origin that unthawed after being frozen of years in the glaciers that are now melting.. went into the water and then showed up as rain.

posted on May, 29 2006 @ 10:35 PM
link
The phenomenon was widely reported in 2001; apparently the rain itself really did happen. So, apparently, did various allied phenomena, such as leaves shrivelling on trees and wells drying up. All very strange. But India is a great land for wonders, from rope-climbing fakirs to levitating elephants, most of which turn out on closer inspection to be mythical or faked. And with no disrespect to Dr. Louis and Prof. Wickremasinghe, South Asian scientists have repeatedly shown themselves to be among the world's most credulous.

This Wikipedia article gives a more balanced account than the NS's 2006 piece, which was surely April Foolery.

posted on May, 29 2006 @ 10:48 PM
link
But, from what I could gather from the New Scientist abstract, they weren't making any extraordinary claims:


It sounds like an episode of The X-Files, but a down-to-Earth explanation is looking the more likely outcome.


Astronomer Chandra Wickramasinghe is studying the cells with microbiologists at Cardiff University. "As the days pass, I'm getting more and more convinced that these are exceedingly unusual biological cells," he says.

So, to me, it sounds more like a straightforward scientific article, rather than an April Fools joke.

Whatever this is, if it is replicating then it is an interesting lifeform.