Assuming this piece originated from the impact floors - which is hypothetical, though somewhat impartial for either creed, it would have fallen 290m (350m, height of 95th floor - 60 m, height of debris impact), which would imply it was travelling at about v_x = 20m/s horizontally (thus, 60 MJ KE x-wise). Bear in mind that the higher up the debris originated, the smaller the forces involved could've been - in turn, the lower it originated, the higher the forces must've been.

What's most interesting is not the KE itself, but the initial pressure it would've had to be exposed to. We'd have to do some major guesswork to arrive at concrete numerical values, however we know that F = ma or F = mv_x/t, respectively (t represents the effective time of acceleration here). Inserting m and v_x, this yields

How to continue from here? If we assumed 10m^2 (generous I think), p would be > 1.2 MN/m^2 = 1200 kPa. That's about 12 times "standard atmosphere". Considering that glass would probably give way to "ambient", i.e. floor encompassing overpressure earlier than steel columns and that the steel had to be structurally dislodged in the first place, I believe the pressure, which radially propagates proportional to 1/r^2, had to be greater by far, though it's impossible to quantify from my position. Also, the piece of debris is not just planar, therefore only complicated fluid mechanicical calculations could resolve the questions.

So, what force was necessary to dislodge the panel? In what way was it dislodged? At the welds? Why didn't the people responsible for the investigation explore these questions?

If someone could come up with yield strengths of the panel's welds (or whatever it was that failed), it should be possible to determine the yield of a specific, local detonation, say within the core, akin to General Partin's Report on OKC, which is recommended reading for anyone who hasn't, yet.

posted on Feb, 18 2006 @ 12:53 PM
link
I will be the first to admit i don't have the understanding of physics to understand the complex chain of events that caused the beam to become lodged in the side of that building.

However it would seem that the forces involved in that building falling would be more than sufficient to throw a 600,000 lb beam 150 meters.

I don't think their is any sort of conspiracy here.

posted on Feb, 18 2006 @ 07:33 PM
link
What are you trying to prove? That aliens used a tractor beam to propel the beam at an unusally high velocity intot he adjacant building?

Or are you trying to prove that explosives were used? Or maybe that the pictures are fake?

That would make each column segment about 1 ton each. That photo looks like a three column wall panel with the spandrel plates. I am too lazy to calculate it, But I seriously doubt that it weighs 300 tons.

posted on Feb, 19 2006 @ 04:38 AM
link
I don't really think it matters if this thing is 600,000lbs or 600lbs unless the poster tells us how this is a conspiracy. My best geuss is that he is trying to prove that some sort of explosives were used to bring the tower down.

posted on Feb, 19 2006 @ 06:10 AM
link
I'd like to gain insights about the pressure needed to dislodge and propel it there, yielding information about the pressure source. I do believe the buildings fell through controlled demolition, just looking for more smokig guns. There are several already: The molten metal, pyroclastic flow, squibs, pre-collapse detonations, WTC7, steel sulfidation, steel evaporation...

Imagine you have a yard stick.

Take it and stand it upright. Now push down on the top end quickly and forcibly so that the stick buckles and breaks.

Do all the pieces fall in a nice little pile at you feet or do pieces fly across the room when the stick breaks?

No imagine what kind of energies built up in the steel columns as they buckled, but before the bolted connections broke. 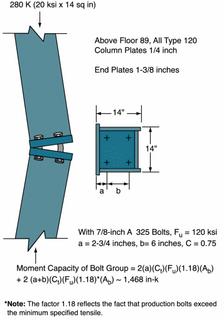 posted on Feb, 19 2006 @ 08:12 AM
link
Why would perimeter panels buckle when the floor slabs were supposed to be pancaking in the first place? There was no hammer on this nail.

It's hard to tell, but it appears the 3x3 panel is rather intact, not bent. So the yard stick analogy seems rather flawed.

Originally posted by Lumos
Why would perimeter panels buckle when the floor slabs were supposed to be pancaking in the first place? There was no hammer on this nail.

It's hard to tell, but it appears the 3x3 panel is rather intact, not bent. So the yard stick analogy seems rather flawed.

"It's hard to tell, but it appears the 3x3 panel is rather intact, not bent. So the yard stick analogy seems rather flawed."

The weakest point of the exterior wall panels was the bolted connections.

Instead of one yardstick, edge glue a bunch of yardsticks together. Since edges glued wood joints are notoriously weak, those will fail first. you would then wind up with a bunch of 3 foot sections.

Besides, you simply can't tell if the wall panel is perfectly straight or not. there could be severe distortions in it that are not visible from this angle. It doesn't have to be bent in a U shape. Remember that it wasn't just a single wall panel that buckled, it was the entire strucutral system.

However, if it makes you happy: 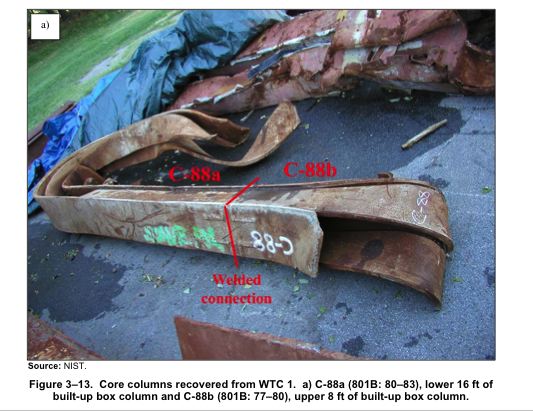 
I have seen many use a single set or a few selected forces to support their pet theories on wtc collapse.

Was it........
Aircraft impact obviously not enough.

All three together? My opinion is yes all three forces combined together are what brought the buildings to point of collapse.

A while back in another 9/11 post a member posted a photo (not from the usual direction showing the cooler side) that clearly showed color intensity trending to yellow/white indicating more heat than most acknowledge.

The aircraft impact swayed the buildings a substantial amount according to people that were inside at the time. We can all see the obvious damage to the structure in photos, what can't be seem is damage to welds, plates, connections due to the motion causing a weakening of the unitary whole.

The structural design intended the core to carry the majority of the gravitational load while the perimeter columns provided lateral support for windloads. All of the struture worked together as a unit spreading and transfering load as required. When the floor connections were severed the perimeter had lost most of its abilty to withstand any lateral load outwards.

I find this photo quite interesting. It is used to make case for explosives but if one looks close at details it shows what I've refered to above.
Photo

If you look at the base of debris cloud you can see a whole section of perimeter columns pushed laterally outwards almost as a unit on both faces but at slightly different elevations.

Further upwards one can see many large setions of perimeter columns separated and thrown by force of debris.

The photo has an arrow pointing to what is claimed is evidence of explosion, I believe what is being seen is either overpressure below collapsing floorplates or the actual interior position of the collapsed floor plates.

The one thing most "pulverized concrete can't hold air" people forget is the fact that there was metal decking under the concrete that would provide the "cap" long enough to develop the overpressure.

Yes this would give the appearence of an explosion however I believe that is a false and unrewarding road to go down when the dynamics all assembled together explain the collapse without impractical, dubious, and hoop jumping processes needed to conspire an explosive theory.

To me the conspiracy lies in the shutdown and purging of Able-Danger findings on the 9/11 conspirators because of politically uncomfortable Chinese proliferation data (LORAL?) that program developed. The Able Danger info presented the chance to find the plot out but the baby got thrown out with the bath water.

While the "glamour" factor is high with the explosive theory, I come to realize that its more likely mundane political CYA that is the root conspiracy.

I also wonder how many gov,mt disinformation agents feed the "explosives" theory so that lookers will not look in the right place for the right reasons.

(one ficticious agent to another) Pssst, lets keep-em hung up on the collapse rather than why they were hit with planes in the first place, that'll keep-em busy.