No post will be longer than 800 words and in the case of the closing statement no longer than 500 words. In the event of a debater posting more than the stated word limit then the excess words will be deleted by me from the bottom. Credits or references at the bottom do not count towards the word total.

Editing is Strictly forbidden. This means any editing, for any reason. Any edited posts will be completely deleted.

Responses should be made within 24 hours, with allowances for the holidays. Please don't press the time limit, as these are timely

Judging will be done by an anonymous panel of judges. Results will be posted by me as soon as a majority is reached.

This debate is now open, good luck to both of you.

There have been many people in the past who have attacked and tried to secularize Christmas. Attacking Christmas is nothing new, but the "War On Christmas" is. Most would think that groups like the ACLU, the AFA and the Americans United for Separation of Church and State would have started the WOC, but that's just not true.

None have had the impact and made the WOC what it is today like that of FOX News Channel. That's right, who would have thought that America's favorite right-winged dynamic duo Bill O'Reilly and Sean Hannity have produced more media coverage and publicized the WOT more than anyone else, and they also started it.

O'Reilly and Hannity first started to speak about the WOC back in 2004 and later reignited the issue in late 2005. Their own television shows, bickering and debates with the anti-Christmas crowd is the reason why there's a WOC. The WOC without them would simply be a few cases of liberal groups trying to ban CHRISTmas in the whitehouse and promote Seperation of Church and State, hardly a war at all. They transformed a few battles of attacking Christmas and escalated it to what we now as the "War on Christmas", which has no bounds. Wal-Mart, Target stores, schools and even mom and pop shops are all getting a piece of the action cause everyone and their mother is jumping on the band wagon that FOX News Built.

Now, as we all know, Christmas is a time for celebration, joy, love and happiness. There aren't many of us who would wish for anything else during this festive season.

However, more and more, people are deciding that this "good time", this "celebration", is outdated, is evil, or is being "tainted" by the hundreds of thousands of people forcing them to bow down to Jesus and acknowledge the Christmas tree as an ultimate symbol of Christian Domination.

But of course, we know this is wrong. Christians celebrate the birth of Jesus at Christmas, despite the lack of a real date, but the 25th is as good a day as any other for it, the fact is it is celebrated. Nobody is forcing the Christian side of it on anyone, just hoping for a little acceptance, rather than being told their "symbols" are offending people.

It is the time of year we should all be accepting of each others faiths and beliefs, not turning on one for having too much "air time".

However much you hate "The right wing", they are doing nothing wrong in defending their celebration or faith. The "War on Christmas" was started by people who feel insignificant and left out because their ego's won't allow them to completely indulge in, or even accept, another faiths celebration without feeling guilty and/or threatened.

I totally agree with chebob

The "right-side" is doing nothing wrong in defending Christmas and all that comes with....baby jesus, Sanata Claus, national holiday, Rudolph, holiday sales, etc..etc...

Also, there are many people every year that are dead set on ruining Christmas for everyone else, but that's not the issue of debate here.

The issue of debate is "The right started the war on Christmas" not wether or not the "right" is justified in defending Christmas or if there are people out there trying to bury Christmas.....which seems to be what chebob is debating.

As stated in my prevous post, FOX News, Bill O'Reilly to be more specific started the War On Christmas by bringing so much attention to what would be small issues that would probably never make the spotlight on the 7'o-clock news. With the exception of the gag declaration of war put out by Beyond Belief Media, the "left side" has not even acknowledged that there is a War On Christmas, that's all coming from the right wingers.

Congressman John D. Dingell summed it all up with his version of Twas the week before Christmas that he recited on the floor of the US House of Representatives during the voting of House Resolution 579.


A fabrication straight from the mouth of O’Reilly
We can pretend that Christmas is under attack
Hold a vote to save it--- then pat ourselves on the back;
www.house.gov

On Dec 6, 2005, 401 of Congress's 435 members voted in favor of House Resolution 579 which:
(1) recognizes the importance of the symbols and traditions of Christmas;
(2) strongly disapproves of attempts to ban references to Christmas; and
(3) expresses support for the use of these symbols and traditions.
thomas.loc.gov... [type "579" in the Search Bill Text block]

401 out of 435, HR-579 was passed. So why is Mr. O'Reilly continuing to escalate this War On Christmas any further than it has already gone. As previously stated in my earlier post, the "right side" started the War On Christmas due to their publicizing of every little anti-Christmas statement that some scrooge has to say. 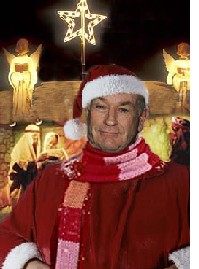 Mr. O'Reilly's show Factor and FOX News Channel have spread the idea to the anti-Christmas crowd that they can whine and cry everytime someone says Merry Christmas in a school or in city hall......The "right side" just can't let the issue drop, they drag it on and on and continue to bring attention to small cases and then next thing we know the ACLU is all over it...and then it's no longer a small, it's a pretty big deal. The "right" has created the very war they're trying to stop....the War On Christmas.

If the "scrooges" and misers that are actually taking part in the Anti-Christmas publicity stunts and and protests, are only doing it because Fox news reports it, then we must ask: Is this not extremely childish? Should we stop reporting about murders because people may see it and decide "You know, I may as well go kill someone too". No, if someone is actually trying to affect somebody elses Christmas, and is trying to take valuable parts of anothers Tradition, it should be reported and treated with much disdain.

Right wing "rags" like the Daily Express and the Daily Mail try to push the blame onto Immigrants, Muslims and any other minority you can think of. We know this is also a lie, something that only serves to create more tensions between divided ignoramuses. We must realise that the War on CHristmas was not in fact "started" by someone, but has evolved from a society that is constantly trying to throw off it's "links to the past" for fear of being trapped in some kind of neo-dark ages (or the middle east as some sad, sad people believe). It is the rejection of anything with religious undertones, anything remotely linked to Christ, that is at "War with Christmas", it is the Councils and "Governing Boards" that create the problems, the reporters just report it, and the people suffer.

And if anymore proof was needed that the Right are completely blame free, I submit to you a (shoddy) artists impression of the night the "War on Christmas" truly started:

*all views are from an imaginary debater, and do not reflect the views of chebob the ATS member*

posted on Dec, 29 2005 @ 07:48 AM
link
SportyMB has forfeited his reply, chebob may proceed with another statement.

posted on Dec, 29 2005 @ 11:17 AM
link
Okay, so we now know that John Kerry has been the culprit all along. But let's just carry on, and really prove that the right did not start the War on Christmas.

1) FOX News - Foxes....Foxes running around in snow....snow....christmas. So as you can see, FOX News loves Christmas.


2) The Right = Red, The Left = Blue. What kind of christmas colour is blue? The only thing blue is santas hands, after some devious lefty has chopped them off!

3) It is a known fact that the Left are lenient on criminals and are very vocal onhuman rights and such.

Liberals would never stand for such harsh treatment, but Santas no fool - he knows only good kids deserve toys. Try telling that to a Lefty....they want Santa going down the chimneys of Prisons!! So which side do you think Santas on, eh?

I believe no more proof is needed, and if it is, I don't know where to find it!