posted on Dec, 22 2005 @ 06:42 AM
link
In all the recent talk about the Saudi sale I noticed something, the sale is credited as a 'BAE sale' not a Eurofighter sale. On looking at it further I also notice that the deal with Austria was done by Germany and that the Turks are talking to Italy over a potential order for 100 Typhoons.

So why are sales not handled by Eurofighter as an single entity?

Also, if this is the arrangement are they running a sweepstake for the winner? Maybe the country with the most exports will be the first to get AMSAR and TVC into service?

If so then Spain needs to pull its finger out!

posted on Dec, 22 2005 @ 08:21 AM
link
If it is true, maybe consortium Eurofighter divided the world on "areas of interest". Germany has middle and east Europe, Italy has Greece and Turkey, BAe has the rest of close east and Spain has Latin America. But it is only my speculation.

posted on Dec, 22 2005 @ 10:02 AM
link
Actually you are almost spot on Matej, I think you are only out in terms of the specific areas covered but you are generally right. 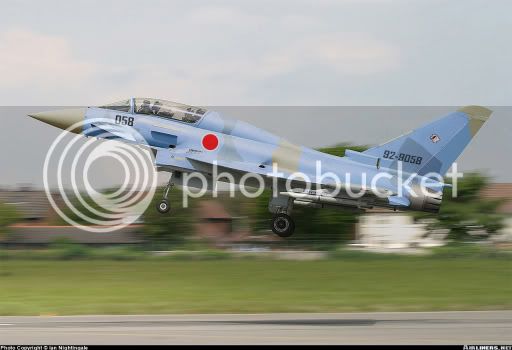 posted on Dec, 22 2005 @ 01:40 PM
link
Yup, Japan seems to be in the first stages of new procurement. The "Spheres of interest/respect" could be true; however it would also be possible that by making a deal directly with Eurofighter GmbH it has to be approved by all 4 participating countries; if lets say Suadi Arabia gives BAe the order to buy X amount of planes and then RESELL them to S-A I think the deal has only to be approved of by the british government.

I´d say its a legal trick to reduce the paperwork. Well, that, and maybe the Eurofighter GmbH simply doesnt have good own promotioners and lobbyists yet

posted on Dec, 22 2005 @ 03:25 PM
link
I think, think mind you that Japan may the first export customer for the F-22 instead of the EF. Just a guess on my part. At least for the Air Sup. role. The have the money and have the requirment between the North Koreans and the Chinese. I also think that Japan will go with whoever will give them more offsets as well.

posted on Dec, 22 2005 @ 04:00 PM
link
Its good to see that the Turkish AF is looking at the Eurofighter. I dont remember if they participate in the JSF programme but this is a better choice none the less.

Originally posted by tomcat ha
Its good to see that the Turkish AF is looking at the Eurofighter. I dont remember if they participate in the JSF programme but this is a better choice none the less.

It is a good fit for them both in a military sence and in a politcal sence in terms of joining the EU.

Does anyone have any more up to date information (later than Jan 2004) on the following possibilities?

All of the above were actual prospective sales where dialogue was ongoing at the time. The list also included Austria Singapore Saudi Arabia and Greece (subsquently lost 1 won 2 and with Greece in abeyance following an F-16 buy).

posted on Dec, 23 2005 @ 09:48 AM
link
I can say that number 36 next to Czech republic is VEEEEEEEERY unrealistic. The word "possibe" is very good, because Czech republic had a big problem to find money for 12 + 2 Gripens. They also suspended MiGs-29 because they have two engines and burn a lot of fuel. To buy and use Eurofighters is unreal.

Also Poland bought 40 F-16s, so there is no gap to sell Eurofighters.

I know about the Polish order for the F-16 (and also South Korea I think) but I am curious as to when these orders were placed, if after Jan 2004 then they would almost certainly kill off Eurofighters hopes there, but if after there might still be some scope for a later sale (as with Greece).

It might also be true that the cheaper Gripen was selected by the Czech Republic instead of Typhoon, this makes sense. I know they are getting Gripens - I have seen a photo of a Czech Gripen on test flight, I was just wondering about it in relation to this table.

posted on Dec, 23 2005 @ 10:14 AM
link
It is exactly what I am saying. I cant qualified describe the other states, but I have a lot of friends and some family in Czech republic, so I 100 % know that they are not going to buy any new fighters during next (at least) 10 years. But the hope of manufacturers is still a funny reading....

12 JAS-39C and 2 JAS-39D aircraft have been ordered for delivery starting 2005. There will be some adaption to Czech airforce requirements - they will also have the option to buy them (they are only leasing them) at teh end of the contract.

posted on Dec, 23 2005 @ 12:25 PM
link
Don't you just hate those all-grey low viz roundels that so many air forces use these days? No style. Thankfully the latest pictures of USN F/A-18E's show the full three colour original reinstated

I'm glad the RAF never followed this route but it has to be said that the 'pink and powder blue' version is less than macho.