(OP/ED) How the Communists Rule Germany (moved from ATSNN)

posted on Oct, 11 2005 @ 06:05 PM
link
Germany has no active public debate in regards to choices between freedom and statism, and libertarian ideology has zero public presence. After a decade and a half since the fall of Berlin Wall, a huge number of votes for the Communists will prevent the formation of an electoral coalition towards reform. This trend means Germany will plunge further into socialist-style welfare state, eventually ruled by the former Communists of East Germany.

www.mises.org
Before getting to the details of the most recent elections, consider the history. In the decades since World War II, Germany has turned into a welfare state of incredible dimensions: six weeks of paid vacation per year for every employee (guaranteed by law), myriad possibilities to shorten the working life (only a handful of German citizens over 60 still work), a working week of only 35 hours in many industries, and extensive social security and health insurance.

On September 18th Germany's conservatives won a narrow victory against the coalition of the Social Democrats and the Green Party but fell short of the majority needed to form a center-right government with their preferred partners, the free-market orientated and pro-business Free Democrats. The Communists were the reason.

The lower-than-expected number of seats makes it impossible for the conservative top candidate Mrs. Angela Merkel to form a center-right coalition. The preferred partner, the Free Democrats reached 10% of the votes, which is fantastic for this party. But it gives them only 61 seats in the Bundestag, which is not enough for a center-right coalition.

And so the tragedy is clear: the continuation of socialist-style policy is the means that the German political establishment will choose in order to avoid granting more power to the former Communists of East Germany. Communists controlled less of Germany 20 years ago than they do today. It does make one wonder who won the Cold War after all.

Why do people vote for Communists? Is it really much easier to live in a communist society, where everyone else is responsible for your actions. Are the German's giving up on a freedom, because they're too addicted to their 6 week vacations and lucrative benefits?

Now comes a time when we may ask,"Who are the real winners of the Cold War and the fall of the wall?" The trend is growing in Europe and "Soziale Marktwirtschaft" is dead.

Germany has sold out freedom for welfare.

posted on Oct, 11 2005 @ 11:01 PM
link
I'm sorry, but your only evidence for how "Communists rule Germany" is the fact that it's becoming a welfare state? Many welfare states are not communist. I think you are confusing socialism and state regulation of the economy with communism.

Originally posted by koji_KI'm sorry, but your only evidence for how "Communists rule Germany" is the fact that it's becoming a welfare state?

You might actually try to "read" the article, because you would have discovered that the author means the Communists hold a balance of power that prevents the formation of a reform coalition. But since you didn't read it, it makes me wonder why you responded at all.
__________________
Germany’s New Chancellor 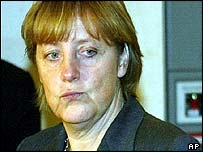 Merkel The 50-year-old divorced ex-communist daughter of a Protestant pastor spent her first 35 years in the hard-line communist state of East Germany.

i thought communism died when the wall came down.

(i shouldn't drink and post at the same time)

posted on Oct, 23 2005 @ 11:32 AM
link
Communists in Germany relate to socialism and an implemented socialist agenda, which then equates to the multiple social reforms that have been implemented over the years in Germany.