Today Rep. Henry A. Waxman and House Democratic Leader Nancy Pelosi introduced the Anti-Cronyism and Public Safety Act, which would prohibit the President from appointing unqualified individuals to critical public safety positions in the government.

"President Bush has handed out some of the country's most difficult and important jobs - leadership positions in public safety and emergency response - to politically well-connected individuals with no experience or qualifications," Rep. Waxman said. "This common sense legislation will end this practice and ensure that public safety is back in the hands of those who are trained and experienced in protecting the public."

While this legislation is intended to limit Executive Apointees, it's too bad they can't extend this legislation's provisions to Canidates for Senate or Congress as well, maybe we can get rid of some of these Fogies that are so old they have to nap through debates...

Strom Thurman was too old to be making laws, that's all there is to it.


Jesse Helms was too Old to be making Laws... 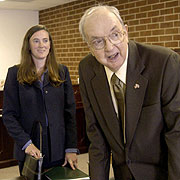 Former President Ronald Reagan suffered from Alzheimer's disease. Towards the end of his Administration he wasn't able to answer simple questions without refering to index cards he kept in his jacket pocket.


I mean come on, this guy making laws?

posted on Sep, 28 2005 @ 08:04 PM
link
I would rather have the old coot that has to use a walker to putz along to the red button that says "Destroy the World" than to have people like Michael Brown in charge of FEMA.

Originally posted by twitchy
I mean come on, this guy making laws?

Sorry for the applause tourettes, but I can't commend you enough for bringing this much needed legislation to our attention (not to mention a fellow North Carolinian for sharing the shame that is Jesse Helms).

I used to watch his filibusters on CSPAN just to get angry.

But yes, this should be considered for gravy appointments to sensitive positions, no bid contracts for golf buddies and everything else this misadministration has so effectively highlighted for us.

I hope the Anti-Cronyism bill passes too, but we've yet to hear from the Pro-Cronyism contingent. What you say cronies?

posted on Sep, 28 2005 @ 09:41 PM
link
The signifigance of this legislation cannot really be overstated, I view it as a much needed kick in arse to the delicate systems of Checks and Balances. The Privilidges extended to the Executive Branch of the Federal Government is entirely out of control, by way of Executive Order and Apointees, and Privilidged Secrecy the White House is empowered beyond what was meant by founding our fathers.
Cronyism, or dare we call it Neo-Feudalism, has some serious and dire effects upon the governed, and we have caught just a glimpse of it during the recent Hurricane Katrina Debacle.
The first man on the job was Bush's old Campaign Manager who was perhaps a bit more qualified than the next next man, Michael Brown, who's sole qualification was his status as an old college buddy to handle the largest disaster perhaps in American history, at a half a billions dollars a day no less. While people drowned in Chemicals and Feces, Buses and Truckloads of Aid were literally turned away from New Orleans, and Brown's FEMA showed up five days later without so much as a can a Beanie Weenies.

Funny, they responded well to 9-11, in fact FEMA was ordered into NY on 9-10, but that's another thread.

This Bill desperately needs public support.
Cronyism, also well known here in NC as the Good Ole Boy System, is ancient and anciently corrupt. With our system of Government we have a unique opportunity in our history to bring the Good Ole Boy System into legal question. This could be the American Magna Carta of sorts, and I have to hand a Big Thank you to Congressman Waxman for spearheading this Legislation. It probably has a snowflakes chance in hell of passing the Senate, but with Katrina fresh on the Legislative Minds, perhaps this could the beginning of a good thing for Democracy.

Today Rep. Henry A. Waxman and House Democratic Leader Nancy Pelosi introduced the Anti-Cronyism and Public Safety Act, which would prohibit the President from appointing unqualified individuals to critical public safety positions in the government.

"President Bush has handed out some of the country's most difficult and important jobs - leadership positions in public safety and emergency response - to politically well-connected individuals with no experience or qualifications," Rep. Waxman said. "This common sense legislation will end this practice and ensure that public safety is back in the hands of those who are trained and experienced in protecting the public."

Let me put on my asbestos underwear on here..

Ok.. Now.. Let me say what I was thinking when I after I read the above statement.. "Oh Horseshoes!"

I know this is reactionary legislation to the situation that happened in the wake of Katrinna. But to get to the meat of what I am considering is this..

WHO is to decide who is Qualified or Unqualified in presidential appointments of public safety? Congress? The Senate? The Supreme Court? The RNC Chairman?, the DNC Chairman?

Yes.. Its Easy in hindsight to go after the president after the dirt that was dug up against the former FEMA chief. AFTER the disaster had already happened. I agree Brown was not he best choice.

So why is the Senate not being held accountable for oversight in this matter.. and now a NEW legislation is being brought forth.. to essentially "fix" the problem? Why did the Senators not have "investigations into the FEMA's chief past when he took the post, instead of the mess we had after hurricane?

To me it was too convient to have the background on Brown after the mess in the Gulf Coast.. and NO one is questioning how this information is "comming to light" after his screw ups.

ok I will probably get banned of this board network.. but I had to reply to the message..

posted on Oct, 10 2005 @ 06:03 PM
link
I agree with Kitanis. I'm sure that the Senate assumes that our Presidential leadership to make fairly sound decisions on their selections to our most critical government positions. However there is no excuse on their part to not do some research on the people that they approve into these positions. It's just disgusting how the Congress wastes so much time and money bickering over nonsense and fail to accomplish anything productive.