posted on Aug, 6 2005 @ 06:12 AM
link
International air show MAKS-2005 will be held in Zhukovsky (the Moscow region) from August 16-21 displaying Russian military and civilian aircraft.

Aircraft on exhibit at the air show will include the Tu-204-300 and Il-96 passenger planes produced specially for Cuba, the Mi-38 helicopter, and the An-148 cargo plane, Igor Garivadsky, a deputy head of the Russian Federal Industry Agency (Rosprom) said at a news conference Tuesday. "The air show will also feature new aircraft that the Russian Air Force is being supplied with for the first time."

Over 40 countries are expected to take part in the air show. France and Germany will be widely represented. Russian corporations, such as Sukhoi and MiG, as well as the Russian Space Agency (Roskosmos) and the European Space Agency will have separate pavilions. In particular, the Tupolev corporation will present its program of dual-purpose aircraft that can be used for both civilian and military purposes.

"The United States will display its unique B-1 bomber, and we are negotiating the possibility of demonstrating its performance," he said.

A total of some 200 aircraft, including 50 foreign ones, will be on display at the air show.

According to a Saturn news release, the company will present two projects, including a new SaM 146 engine for regional civilian aircraft and an engine for the Sukhoi family of military planes. Engines for the latter are designed for both current models and future prototypes.

"Both are fifth-generation engines," Saturn's Director General Yury Lastochkin said in the release. "Saturn's exhibit will occupy a separate pavilion, where company's officials will hold news conferences on key aspects of future activities of the enterprise."

"Domestic aircraft manufacturers must use recent changes effectively to achieve results that benefit the country and the society," he said.

full article ...Credits to Hellmutt for this link

Russia also unveiled the Mig-35 (Mig-29 OVT) airplane that they are offering to India; CLICK FOR VIDEO >>


Zhukovsky, Aug 16. (PTI): India and Russia today signed a USD 350-million deal for the joint development, production and marketing of a new aircraft engine for use on the Indian indigenous Intermediate Jet Trainers (IJTs) HJT-36 and HJT-39 (CAT)

Putin, who arrived here onboard special helicopter, immediately after formally inaugurating the air show went straight to the Rosoboronexport Chalet to bless the signing of the Indo-Russian deal with his presence, signaling the importance attached by the Kremlin to defence cooperation with New Delhi.

Under the general contract signed today, HAL will initially produce 250 AL-55I jet engines and would have right to indigenously produce 1,000 more.

The inter-governmental agreement on licensed production of the engine is scheduled to be signed in New Delhi on August 18.

The Russian engine developed by NPO Saturn scientific-production enterprise is first of its kind to be serially produced in Russia and India, General Designer Alexander Sarkisov told PTI on the sideline of the air show.

"It would replace French Larsac engines in 2008, currently being used in HJT-36 proto-types," Sarkisov said.

"The Indian side has chosen our engine as the result of a convincing victory over European manufacturers in the tender for engine project for the prospective HJT-36 and latest HJT-39 trainer jets developed by HAL for the Indian Air Force," he said.

According to Sarkisov, his NPO Saturn, which has developed unique thrust vectoring engines for India's Su-30MKI and MiG-29 fighters, "has built the new engine from a scratch."

For the first time HAL has also opened its stall at the MAKS aerospace show displaying models of its Tejas LCA, HJT-36 and Dhruv advanced helicopter.

The Ilyushin Finance leasing company has signed contracts for the deliveries of 56 planes, whose total value is 1.6 billion dollars, during a business stage of the MAKS-2005 aerospace show, a representatives of the company’s press service told Itar-Tass on Friday.

According to the information of the press service, one of the biggest contracts is an agreement on the deliveries of 18 AN-148 planes, produced in Voronezh, to the Pulkovo Air Company. AN-148 planes will also be delivered to the Polyot Air Company. Five out of twenty planes will be cargo planes. Aside from it, Ilyushin Finance reached agreement on the deliveries of TU-204-100 and TU-204-300 planes to the Kavminvodavia Company and the Vladivostok Avia Company. The leasing time for every plane is 15 years.

The contracts signed on the deliveries of new Russian planes on leasing terms “permit to regard with optimism the future of the Russian civil aircraft building,” said the representative of the press service.

posted on Aug, 21 2005 @ 02:40 PM
link
Actually I had an idea of creating such a thread but was too busy with my internship as a doctor to find time
well here are some more links about MAKS 2005/Contemporary Russia

also "Mikhailov also said Russia was finishing state testing of the new Mi-28H Night Hunter helicopter, which could become the main combat helicopter of the Russian Army. Its serial production will start next year."
(link)

posted on Aug, 21 2005 @ 04:38 PM
link
I would like to add that wide range of new russian UAV's was presented, the one I like the most is the new stealth UAV with VTOL, it was created by Kvand. 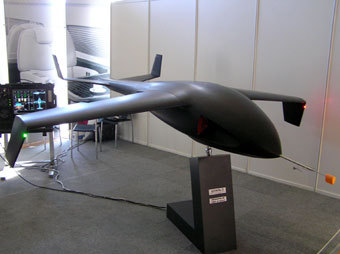 Some pictures from MAKS2005 can be found here:
www.aviasalon.com...

posted on Aug, 21 2005 @ 07:29 PM
link
cool pics stealth spy. Thats the first good picture i've seen the the Kliper, and the only one i've seen with it having mini wings.

ExD - Whats the name of that UAS? Its actually good looking, which isn't the russian norm.

More than 500,000 people have already visited the MAKS-2005 international aerospace show in Zhukovsky near Moscow since it opened on Tuesday, August 16, an official at the information and public relations center of the Moscow region’s police department told Itar-Tass on Sunday.

“Most of all visitors were registered at the annual air show on Saturday,” the official said. “About 300,000 visitors gathered at the airfield of the Gromov research institute that day alone.”

Millions of colored lights flashed in the sky above the airdrome to mark the closure of this year’s show, the biggest one over the twelve-years-long history of MAKS’s.

Officials at Moscow region’s Interior Department said about 150,000 guests visited the show Sunday, thus bringing the total number of visits since August 16, the opening day, to 650,000.

The OSA-AKM modernized antiaircraft missile system was presented at the MAKS-2005 aerospace show in Zhukovsky Tuesday.

"About 400 OSA systems have been adopted by different countries," Alexander Konopolov, chief designer at the Izhevsk Electromechanical Plant Kupol, said at the presentation ceremony. Various aspects of the antiaircraft missile system have been modernized - crew protection has been enhanced, combat control efficiency has been improved, the payload has been replaced, and microwave devices and units have been changed.

"Among the innovations introduced through the system's modification are a day-night electro-optical finder and 'traps', special devices to protect the vehicle from HARM missiles," Konopolov said. OSA-AKM has also been equipped with a radar locating system.

Konopolov specified that modernizing the payload of the 9M33M3 missile increased its target destruction effectiveness by 10-20 %.

View full sized pic of it

Originally posted by Murcielago
Whats the name of that UAS? Its actually good looking, which isn't the russian norm.

The specimen differs markedly from the already existing unmanned drones and bears no resemblance to them. This new project draws on the combined international experience of unmanned aircraft design. The aircraft is capable not only of ‘normal’ take-off and landing on a runway, but also of vertical operation. The drone also has a radio transparent body which makes its detection by radar extremely difficult.

The Shtil aircraft is flexible enough to be used for a multitude of applications. One of its major functions is surveillance, in commercial and municipal sectors, as well as in the military field. Geological surveys, oil and gas pipeline monitoring, jamming, aerial target application (the drone has a high flight speed of up to 780 km per hour), rescue mission assistance at emergencies both on land and at sea – this is just a small list of functions the new drone is able to perform.

KVAND’s Chairman Oleg Ponomarev commented: “Considering the latest trends in aviation technology development, and keen interest towards it on the part of emergency and military services, there is a huge market for unmanned drones of all classes and purposes opening up throughout the world, where Shtil-3 will surely find its place.”

posted on Oct, 29 2005 @ 04:31 PM
link
Man that UAV the Shtil is cool looking. It reminds me of the Hunter killer flying robots in the Terminator movie.

Its also always great to see more pictures of the Su-47 I just think that plane looks sweet.