posted on Jul, 30 2005 @ 01:14 PM
link
Uzbekistan has given the USA six months to leave the airbase at Karshi-Khanabad.The base is key to Operation Enduring Freedom in Afghanistan and for supporting the efforts in Iraq.

news.bbc.co.uk
The notice to leave Karshi-Khanabad air base, known as K2, was given to the US embassy in the Uzbek capital on Friday. A Pentagon spokesman said the US was "evaluating the note to see exactly what it means"

Earlier this month, Russia, China and four Central Asian states demanded a timetable for US troop withdrawal from the region, saying military operations in Afghanistan were coming to an end.

Washington's rivals for regional dominance, Russia and China, have made it clear they do not want to see US forces in the region on a permanent basis

The US is apparently witholding aid to the country, following recent cival unrest in the Central Asian country, where soldiers opened fire on civilians. I have heard rumours of this for a while, that other countries in the area were considering similair action, also that Russia and China are mobilizing troops on their borders in the area, to regain dominance in the region in the near future. This though is the first verifiable hint that this may be happening.

posted on Jul, 30 2005 @ 02:09 PM
link
Good.
Along with that base, the US needs to pull outfrom or close a number of others spread throughtout Europe and Central Asia.

posted on Jul, 30 2005 @ 02:13 PM
link
Holy smoke, that has come out of no where. If the United States knew this was coming up they should of played a blinder and said they are completely pulling out of Uzbekistan when the riots happend. That way they would of been seen to be taking an extremely tough line against murderous dictators.

This news is astounding!

posted on Jul, 30 2005 @ 02:43 PM
link
If you look at the strategic importance of the bases in the neighbouring countries of Afghanistan that the US is using, they are to be very reserved strategically massively important. Also of interest is the Shanghai Corporation (the local regional 'pact' between Russia, China and Uzbekistan etc) getting nervous or prepared for the openly talked about Iran Invasion possibility. This closure if followed by similair actions by the other Base Host Countries could be a way of making the US taking the Iran issue of the table. 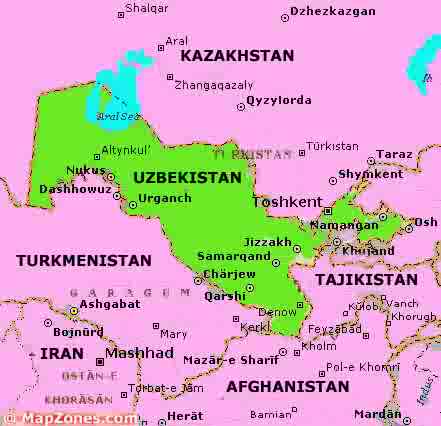 Think I will be watching this closely.

BBC Radio Four News just reported from the pentagon who have said the note given to them by the Diplomat stated:

The USA is to Terminate all Military operations in Uzbekistan

So in other words all military personal out not just the Airbase.

The pentagon official said they didnt know the reason for the request and found it puzzling, however the Secretary of Defense had previously said it would not affect the any US operations in the area.

Along with that base, the US needs to pull outfrom or close a number of others spread throughtout Europe and Central Asia.

Are other countries waiting to establish dominance the minute the US is out of the way? Is this any better?

Without an international agreement from all countries to do the same, stay out of these areas too, this makes me very nervous.

posted on Jul, 30 2005 @ 07:09 PM
link
What? You mean stop them from making bases on their own soil? China and Russia are a physical part of that region. With what grounds would you stop them from having bases there?

Would the United States accept restrictions on it putting bases up on American soil?

As far as I knew, Uzbekistan was being used for the continuing operation in Afghanistan. China and Russia (among others) have been pressuring the US for a pull-out agenda for Iraq, not Afghan.. so the excuse doesnt jive here.. theres something more to this story..

posted on Jul, 30 2005 @ 07:45 PM
link
Maybe the Russians and the Chinese do not trust the current United States administration.

Put the shoe on the other foot. Lets say the Chinese invaded Mexico and set up a Chinese friendly regime there. They then put up a nice military base close to the continental United States.

Now would the the United States be comfortable with it? Would the Chinese necessarily have to of done anything to the US to warrant any United States concern over the base?

I think the answers are quite evident and the reactions of both the Chinese and Russians are more than understandable.

Furthermore, Uzbekistan shouldnt be an American ally - period. Karimov is a murderous dictator and has been acknowledged as such by the US congress. It should of been the United States that pulled out of Karimov's Uzbekistan after the massacres, not getting the boot a few months later.

posted on Jul, 30 2005 @ 08:05 PM
link
Originally posted by subz
Maybe the Russians and the Chinese do not trust the current United States administration.

Put the shoe on the other foot. Lets say the Chinese invaded Mexico and set up a Chinese friendly regime there. They then put up a nice military base close to the continental United States.

Like China can invade Mexico in teh first place and if did they wouldn't get away with it. I am sure Mexico would beg for the US to help them. and the UN will be all over this one, unless Mexico attack china first like thats going to happen lol.

Now would the the United States be comfortable with it? Would the Chinese necessarily have to of done anything to the US to warrant any United States concern over the base?

of course not, but how would china invade it and put a base here?

I think the answers are quite evident and the reactions of both the Chinese and Russians are more than understandable.

Furthermore, Uzbekistan shouldnt be an American ally - period. Karimov is a murderous dictator and has been acknowledged as such by the US congress. It should of been the United States that pulled out of Karimov's Uzbekistan after the massacres, not getting the boot a few months later.

I bet in your dreams you probility murder somebody.

Guess what?
Its all apart of abiding by the wishes of those who have asked.
Heads-up, read and weep:

Russia, China and the Central Asian states asked U.S.-led troops on Tuesday to fix a date for their departure from military bases in Central Asia that were set up to support operations in Afghanistan in 2001.

The United States operates military airbases in Kyrgyzstan and Uzbekistan -- two of the five former Soviet Central Asian republics that Russia still views as its backyard and where China, seeking oil and gas, is an increasingly vocal player.


This is why the US is pulling out or closing the base.

Supporting US forces in Afghanistan and surrounding countries in Central Asia required surface transportation movements by train and truck across thousands of kilometers of some of the most forbidding territory in the world. Some shipments, after traveling by ocean carrier to Bremerhaven, Germany, journey by railcar to Uzbekistan.

You dont ship supplies across the Atlantic then thousands of miles by train through that terrain without a reason.

posted on Jul, 30 2005 @ 09:53 PM
link
The base closure just proves Bush's commitment to democratization in the region and should be viewed in an overall positive light.

Hmmm, why would I say that?

Karimov liked the US forces and the large amount of money the war on terror brought to his coffers along with tacit insurance that his government would not suffer the chance of overthrow by islamic fundamentalists.

Karimovs security forces killed over 500 citizens during a pro-democracy rally in the Andijan province.

The US called for an independant investigation of the events leading to the massacre and was to ask the government to institute democratic reforms.

If Bush only gave lip service to democratization in the region then no call for an investigation nor requests for reforms would have been made, rather what did happen was based on principle instead of expediency.

If Bush was insincere about his aims in the region then nothing would have been done that chanced the closing of the base. Instead he would have helped to prop up a government bent on maintaining the status quo.

This closure shows Bushs integrity in sticking to principle.

Originally posted by MischeviousElf
You dont ship supplies across the Atlantic then thousands of miles by train through that terrain without a reason.

Thats a 2001 mention, MischeviousElf.
The paragraph you quoted is a related and carry-over paragraph and mention from the preceding paragraph, where this is mentioned:

as quoted from GlobalSecurity.org, as already linked
By mid-October 2001 there were three layers of security for 5 km around Khanabad, with the outer two layers manned by Uzbek forces and the inner layer manned by US troops. As of mid-October 2001 about 1,000 members of the Army's 10th Mountain Division were deployed to the Uzbek air base at Khanabad, about 90 miles north of the Afghan border.

As such, the one that matters is the article you posted today and the mention that GlobalSecurity.org has in bold:

as quoted from GlobalSecurity.org, as already linked
In late July 2005, Uzbekistan formally terminated an agreement allowing the United States to use the Karshi-Kanabad (K2) Airbase in support of its military operations in Afghanistan. The Washington Post reported that the United States had been given 180 days to vacate the facility which it had used since October 2001 and reportedly housed approximately 800 personnel. The termination of the agreement followed criticism increased restrictions on the use of the base by teh Uzbek government as well as rising tensions between the two countries, specifically criticism from the United States and its calls for an independent inquiry into the May 2005 clashes between Uzbek security forces and civilians in the city of Andijan.

After this bolded mention, GlobalSecurity.org then gives a brief history of the base that is being closed/terminated, that is where your quote came from, a 2001 historical mention of the base.

posted on Jul, 31 2005 @ 01:49 AM
link
ahem.. Just to confirm.. China does not have any PHYSICAL miltary presence in the CARS (Central Asian Republics) and I don't think they're manuevering to do so either..

India HAS a AF base in Tajik.. I think they're negotiating more acquisitions in other CARS countries and they're setting up some anti terror establishments in Tajik too..
China can only enter CARS under Russian consent and so the Sino-Russian view on this region should be closely examined

Maybe India is the key to maintaining an indirect american presence in the CARS..

The Uzbek government obviously believes the Pentagon has been dealing with terrorist groups and decided to deny the Americans a base from which they might be using to foment Islamist terrorist operations in Uzbekistan and in surrounding countries.

posted on Jul, 31 2005 @ 10:27 AM
link
And isnt it funny that russia and china have been doing alot of trade with military weapons . I think they dont want us using that base as a decoy and a jump point for secret missions .

posted on Jul, 31 2005 @ 04:13 PM
link
This guy has done his homework but do you realize the ameirans are all pulling out of germany?where do you think they will end up?Iran?