posted on May, 4 2005 @ 03:33 PM
link
Pat Tilman former NFL player who went to Afghanistan last year had been killed by friendly fire from his fellow Rangers. Investigators knew within days, but decided not to inform Tilman's family or the public of an act of "gross negligence" until weeks after the nationally televised memorial service. Soldiers who had been with Tilman said that they immediately reported that other Rangers in a Humvee opened fire with high powered weapons on Afghan Militia Forces working with the Rangers. Without a pause they turned there guns on Tilman who was waving his arms and releasing smoke grenades to signal to his unit he was not the enemy.

A new Army report on the death shows that top Army officials, including the theater commander, Gen. John P. Abizaid, were told that Tillman's death was fratricide days before the service.


Soldiers on the scene said they were immediately sure Tillman was killed by a barrage of American bullets as he took shelter behind a large boulder during a twilight firefight along a narrow canyon road near the Pakistani border, according to nearly 2,000 pages of interview transcripts and investigative reports obtained by The Washington Post.

The documents also show that officers made erroneous initial reports that Tillman was killed by enemy fire, destroyed critical evidence and initially concealed the truth from Tillman's brother, also an Army Ranger, who was near the attack on April 22, 2004, but did not witness it.
Brig. Gen. Gary M. Jones prepared the report in response to questions from Tillman's family and from Sen. John McCain (R-Ariz). Jones concluded that there was no official reluctance to report the truth but that "nothing has contributed more to an atmosphere of suspicion by the family than the failure to tell the family that Cpl. Pat Tillman's death was the result of suspected friendly fire, as soon as that information became known within military channels."


Well it’s sad to get capped by your own men, but accidents happen. What bothers me about this story is the Army not telling his family immediately, I feel the Army tried to us his death to gain propaganda points from American citizens, to tug at there heart strings.

posted on May, 4 2005 @ 03:46 PM
link
It is a damn shame that the forces Tilman was so proud to serve saw fit to manipulate him in death.
Those who conspired to cover up the circumstance of his death are undeserving of his loyalty.

posted on May, 4 2005 @ 03:57 PM
link
Let it be understood that "friendly fire" is hostile fire and that Tillman's sacrifice is no less honorable because the fire that killed him originated from friendly forces, in this case his own platoon. Unless you have been in such circumstances, it may be impossible to understand how such a thing can happen, but combat is at best "controlled choas," especially in the dark.

Regardless, such events are investigated and evaluated and those responsible are punished. It has happened to my unit more than once and thankfully we were cleared of any wrong doing.

They don't call it the fog of war, for nothing.

Pat Tillman is a hero.

posted on May, 4 2005 @ 04:40 PM
link
This brave warrior died a hero's death, but his loved ones are left with this tragic legacy of doubt about the circumstances of his death.

I have been reading about this issue for a few days on a related ATS thread:

Anybody still care about Patrick Tillman?

On this thread, I found a link which led to a page where I found another link to the following Washington Post article:

There you will find a detailed account of the circumstances surrounding his death. 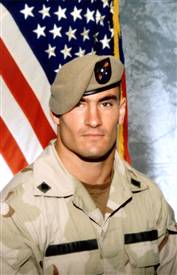 edit darn even I made one